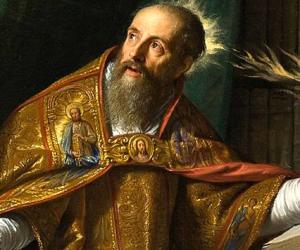 Saint Augustine described his quest to find God in his autobiography titled, ‘Confessions’, where he admitted to having committed several petty sins. Despite the fact that his mother was an ardent Christian, Augustine most likely took after his heathen father, Patricius. One day, at church, while he was praying for forgiveness for all his misdeeds, Augustine suddenly heard a child’s voice urging him to, “Take up and read”.

Immediately, Augustine opened the Bible and read the first page that caught his eyes. The lines told him to give up all his sins and turn over a new leaf. Immediately, the young man changed his ways, donated all his wealth, regularly prayed and got baptized on Easter. Then one day in 391, the now pious man travelled to Hippo, where the bishop, Valerius was discussing how the city had a dearth of priests. Immediately the listeners started advocating for the appointment of Augustine as their priest. When Valerius passed away, Augustine took up the position as the bishop, and in this capacity, he did away with misleading religious sermons, and showed compassion towards the underprivileged and the ailing. He also ensured that the naïve were sheltered from the conniving. More so, with each passing day, his love for God seemed to grow and he confessed, “You have made us, O God, for yourself, and our hearts shall find no rest until they rest in you.”

Men go abroad to wonder at the heights of mountains, at the huge waves of the sea, at the long courses of the rivers, at the vast compass of the ocean, at the circular motions of the stars, and they pass by themselves without wondering.

What then is time? If no one asks me, I know what it is. If I wish to explain it to him who asks, I do not know.

Faith is to believe what you do not see; the reward of this faith is to see what you believe.

Do you wish to rise? Begin by descending. You plan a tower that will pierce the clouds? Lay first the foundation of humility.

The world is a book, and those who do not travel read only a page.

Resentment is like drinking poison and waiting for the other person to die.

God loves each of us as if there were only one of us.

Since love grows within you, so beauty grows. For love is the beauty of the soul.

It was pride that changed angels into devils; it is humility that makes men as angels.

God had one son on earth without sin, but never one without suffering.

Give me chastity and continence, but not yet.

Do you wish to be great? Then begin by being. Do you desire to construct a vast and lofty fabric? Think first about the foundations of humility. The higher your structure is to be, the deeper must be its foundation.

Beauty is indeed a good gift of God; but that the good may not think it a great good, God dispenses it even to the wicked.

Since you cannot do good to all, you are to pay special attention to those who, by the accidents of time, or place, or circumstances, are brought into closer connection with you.

Patience is the companion of wisdom.

This is the very perfection of a man, to find out his own imperfections.

My mind withdrew its thoughts from experience, extracting itself from the contradictory throng of sensuous images, that it might find out what that light was wherein it was bathed... And thus, with the flash of one hurried glance, it attained to the vision of That Which Is.

Humility is the foundation of all the other virtues hence, in the soul in which this virtue does not exist there cannot be any other virtue except in mere appearance.

The purpose of all wars, is peace.

What does love look like? It has the hands to help others. It has the feet to hasten to the poor and needy. It has eyes to see misery and want. It has the ears to hear the sighs and sorrows of men. That is what love looks like.

Forgiveness is the remission of sins. For it is by this that what has been lost, and was found, is saved from being lost again.

In the absence of justice, what is sovereignty but organized robbery?

Love is the beauty of the soul.

The words printed here are concepts. You must go through the experiences.

Repentant tears wash out the stain of guilt.

In doing what we ought we deserve no praise, because it is our duty.

The confession of evil works is the first beginning of good works.

Oh Lord, give me chastity, but do not give it yet.

O Lord, help me to be pure, but not yet.

Charity is no substitute for justice withheld.

O Holy Spirit, descend plentifully into my heart. Enlighten the dark corners of this neglected dwelling and scatter there Thy cheerful beams.

Find out how much God has given you and from it take what you need; the remainder is needed by others.

There is something in humility which strangely exalts the heart.

I have read in Plato and Cicero sayings that are wise and very beautiful; but I have never read in either of them: Come unto me all ye that labor and are heavy laden.

A thing is not necessarily true because badly uttered, nor false because spoken magnificently.

If we live good lives, the times are also good. As we are, such are the times.

It seems to me that an unjust law is no law at all.

He that is jealous is not in love.

Grant what thou commandest and then command what thou wilt.

Punishment is justice for the unjust.

Indeed, man wishes to be happy even when he so lives as to make happiness impossible.

God is best known in not knowing him.

Hear the other side.

God judged it better to bring good out of evil than to suffer no evil to exist.

Thou must be emptied of that wherewith thou art full, that thou mayest be filled with that whereof thou art empty.

I want my friend to miss me as long as I miss him.

By faithfulness we are collected and wound up into unity within ourselves, whereas we had been scattered abroad in multiplicity.

The greatest evil is physical pain.

We cannot pass our guardian angel's bounds, resigned or sullen, he will hear our sighs.

Will is to grace as the horse is to the rider.

The spiritual virtue of a sacrament is like light; although it passes among the impure, it is not polluted.

I found thee not, O Lord, without, because I erred in seeking thee without that wert within.

Bad company is like a nail driven into a post, which, after the first and second blow, may be drawn out with little difficulty; but being once driven up to the head, the pincers cannot take hold to draw it out, but which can only be done by the destruction of the wood.

The same thing which is now called Christian religion existed among the ancients. They have begun to call 'Christian' the true religion which existed before.

No eulogy is due to him who simply does his duty and nothing more.

This world's a bubble.

To many, total abstinence is easier than perfect moderation.

Who can map out the various forces at play in one soul? Man is a great depth, O Lord. The hairs of his head are easier by far to count than his feeling, the movements of his heart.

Passion is the evil in adultery. If a man has no opportunity of living with another man's wife, but if it is obvious for some reason that he would like to do so, and would do so if he could, he is no less guilty than if he was caught in the act.

To abstain from sin when one can no longer sin is to be forsaken by sin, not to forsake it.

What I needed most was to love and to be loved, eager to be caught. Happily I wrapped those painful bonds around me; and sure enough, I would be lashed with the red-hot pokers or jealousy, by suspicions and fear, by burst of anger and quarrels.

It is not the punishment but the cause that makes the martyr.

The honors of this world, what are they but puff, and emptiness, and peril of falling?

Don't you believe that there is in man a deep so profound as to be hidden even to him in whom it is?

To seek the highest good is to live well.

If I am given a formula, and I am ignorant of its meaning, it cannot teach me anything, but if I already know it what does the formula teach me?

The soul, which is spirit, can not dwell in dust; it is carried along to dwell in the blood.

Thou hast created us for Thyself, and our heart is not quiet until it rests in Thee.

If we did not have rational souls, we would not be able to believe.

We are certainly in a common class with the beasts; every action of animal life is concerned with seeking bodily pleasure and avoiding pain.

We make a ladder for ourselves of our vices, if we trample those same vices underfoot.

He who labours, prays.

Blessedness consists in the accomplishment of our desires, and in our having only regular desires.

The verdict of the world is conclusive.

We make ourselves a ladder out of our vices if we trample the vices themselves underfoot.

There is no possible source of evil except good.