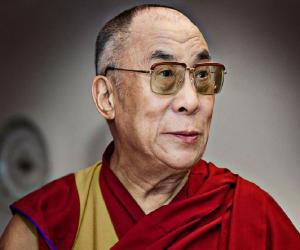 Tibetan
Spiritual & Religious Leaders, Political Leaders, Leaders
The "Dalai Lama" is a title awarded by a Buddhist institution named "Gelug" or "Yellow Hut" to its students, who are usually monks. The man who is currently recognized as the "Dalai Lama" is the 14th recipient of this prestigious title and is also recognized by many as Tenzin Gyatso, another religious identity of his. This religious leader was also felicitated with the Nobel Peace Prize in 1989. When he was two years old, the Tibetan monks identified him as the reincarnation of the 13th Dalai Lama and by the age of six he transformed into a monk. The pontiff has a fascination for science too and in this context the Lama once said had he not been a religious leader, he would have probably become an engineer. He is known for being engaged in finding the effects of meditation on the brain and exploration of several such traditional human practices that can be related to science. The monk was also quoted saying, "If science proves some belief of Buddhism wrong, then the religion will have to change. In my view, science and Buddhism share a search for the truth and for understanding reality." His words have generally made a deep impact on the masses irrespective of the degree of their inclination towards Buddhism. His multi-dimensional school of thought made the renowned technology giant "Apple", use the Lama"s image for their "Think Different" campaign. During sermons, Dalai Lama engages the people with his witty, humor-filled interactive mode of conversation. People camp near ticket counters for days to get tickets in a bid to just get a glimpse of this religious leader, such is his fan following. And why not, after all his words are worth listening to, ruminating about as well as putting them into practice. We here bring in his quotes which will inspire you and offer a different perspective towards life.

All major religious traditions carry basically the same message, that is love, compassion and forgiveness the important thing is they should be part of our daily lives.

If you can, help others; if you cannot do that, at least do not harm them.

Love and compassion are necessities, not luxuries. Without them humanity cannot survive.

I find hope in the darkest of days, and focus in the brightest. I do not judge the universe.

If you have a particular faith or religion, that is good. But you can survive without it.

It is very important to generate a good attitude, a good heart, as much as possible. From this, happiness in both the short term and the long term for both yourself and others will come.

In the practice of tolerance, one's enemy is the best teacher.

It is necessary to help others, not only in our prayers, but in our daily lives. If we find we cannot help others, the least we can do is to desist from harming them.

This is my simple religion. There is no need for temples; no need for complicated philosophy. Our own brain, our own heart is our temple; the philosophy is kindness.

Where ignorance is our master, there is no possibility of real peace.

We can live without religion and meditation, but we cannot survive without human affection.

We can never obtain peace in the outer world until we make peace with ourselves.

There is no need for temples, no need for complicated philosophies. My brain and my heart are my temples; my philosophy is kindness.

With realization of one's own potential and self-confidence in one's ability, one can build a better world.

Sleep is the best meditation.