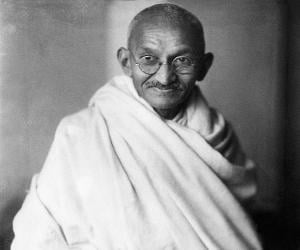 University College London, Alfred High School
Political Leaders, Leaders, Lawyers & Judges, Lawyers
Do you know who inspired famous civil rights leaders such as Nelson Mandela and Martin Luther King Jr.? It was a man from a faraway land, who couldn't bear the injustice meted out to those of a darker complexion. He believed that all men were born equal, and the only way such despotism could be tackled was through non-violence; an ideology he liked to call 'ahimsa'. Yes, the man who helped several world leaders and activists muster the courage to bring about change was called Mohandas Karamchand Gandhi. Mahatma Gandhi was so loved that he was honored with the sobriquet of "The Father of the Nation" by the citizens of India. This visionary who was the avant-gardist of nonviolence fought for all the right reasons liberty, compassion, service and unity. His compassion towards others knew no bounds, extending to strangers and friends alike, regardless of the social and financial status of a person. As an anecdote goes, his shoes fell off his foot one day while boarding a train. Instead of fretting about it, he simply took off the other odd and flung it out of the train, so it fell near the first. Gandhi smiled and said, "The poor man who finds the shoe lying on the track will now have a pair he can use." Need we say more? Go ahead and explore the quotes by this great man, because such sagacious words gain utmost significance when voiced by those who never fail to inspire us.

It is health that is real wealth and not pieces of gold and silver.

A nation's culture resides in the hearts and in the soul of its people.

The best way to find yourself is to lose yourself in the service of others.

An eye for an eye only ends up making the whole world blind.

You must be the change you wish to see in the world.

A small body of determined spirits fired by an unquenchable faith in their mission can alter the course of history.

Happiness is when what you think, what you say, and what you do are in harmony.

Non-violence is the greatest force at the disposal of mankind. It is mightier than the mightiest weapon of destruction devised by the ingenuity of man.

The weak can never forgive. Forgiveness is the attribute of the strong.

The greatness of a nation can be judged by the way its animals are treated.

It is better to be violent, if there is violence in our hearts, than to put on the cloak of nonviolence to cover impotence.

Power is of two kinds. One is obtained by the fear of punishment and the other by acts of love. Power based on love is a thousand times more effective and permanent then the one derived from fear of punishment.

I object to violence because when it appears to do good, the good is only temporary; the evil it does is permanent.

There is a sufficiency in the world for man's need but not for man's greed.

A man is but the product of his thoughts what he thinks, he becomes.

You must not lose faith in humanity. Humanity is an ocean; if a few drops of the ocean are dirty, the ocean does not become dirty.

Strength does not come from physical capacity. It comes from an indomitable will.

Satisfaction lies in the effort, not in the attainment, full effort is full victory.

A coward is incapable of exhibiting love; it is the prerogative of the brave.

In a gentle way, you can shake the world.

There is a higher court than courts of justice and that is the court of conscience. It supercedes all other courts.

Those who know how to think need no teachers.

An error does not become truth by reason of multiplied propagation, nor does truth become error because nobody sees it.

When I admire the wonders of a sunset or the beauty of the moon, my soul expands in the worship of the creator.

The good man is the friend of all living things.

My life is my message.

Nobody can hurt me without my permission.

If patience is worth anything, it must endure to the end of time. And a living faith will last in the midst of the blackest storm.

In prayer it is better to have a heart without words than words without a heart.

The difference between what we do and what we are capable of doing would suffice to solve most of the world's problems.

Truth never damages a cause that is just.

All the religions of the world, while they may differ in other respects, unitedly proclaim that nothing lives in this world but Truth.

Prayer is the key of the morning and the bolt of the evening.

If we are to teach real peace in this world, and if we are to carry on a real war against war, we shall have to begin with the children.

An ounce of practice is worth more than tons of preaching.

There is more to life than increasing its speed.

Even if you are a minority of one, the truth is the truth.

Honest disagreement is often a good sign of progress.

You can chain me, you can torture me, you can even destroy this body, but you will never imprison my mind.

Anger is the enemy of non-violence and pride is a monster that swallows it up.

It is the quality of our work which will please God and not the quantity.

A 'No' uttered from the deepest conviction is better than a 'Yes' merely uttered to please, or worse, to avoid trouble.

To give pleasure to a single heart by a single act is better than a thousand heads bowing in prayer.

My religion is based on truth and non-violence. Truth is my God. Non-violence is the means of realising Him.

If I had no sense of humor, I would long ago have committed suicide.

Poverty is the worst form of violence.

The real ornament of woman is her character, her purity.

We may never be strong enough to be entirely nonviolent in thought, word and deed. But we must keep nonviolence as our goal and make strong progress towards it.

The essence of all religions is one. Only their approaches are different.

There are people in the world so hungry, that God cannot appear to them except in the form of bread.

Truth is by nature self-evident. As soon as you remove the cobwebs of ignorance that surround it, it shines clear.

I suppose leadership at one time meant muscles; but today it means getting along with people.

Jesus is ideal and wonderful, but you Christians - you are not like him.

Man's nature is not essentially evil. Brute nature has been known to yield to the influence of love. You must never despair of human nature.

Morality is the basis of things and truth is the substance of all morality.

Culture of the mind must be subservient to the heart.

To believe in something, and not to live it, is dishonest.

Anger and intolerance are the enemies of correct understanding.

No culture can live if it attempts to be exclusive.

Faith is not something to grasp, it is a state to grow into.

Whatever you do may seem insignificant to you, but it is most important that you do it.

There is nothing that wastes the body like worry, and one who has any faith in God should be ashamed to worry about anything whatsoever.

Peace is its own reward.

We may stumble and fall but shall rise again; it should be enough if we did not run away from the battle.

I believe in equality for everyone, except reporters and photographers.

When restraint and courtesy are added to strength, the latter becomes irresistible.

Freedom is not worth having if it does not connote freedom to err.

Nearly everything you do is of no importance, but it is important that you do it.

What do I think of Western civilization? I think it would be a very good idea.

Always aim at complete harmony of thought and word and deed. Always aim at purifying your thoughts and everything will be well.

Prayer is not asking. It is a longing of the soul. It is daily admission of one's weakness. It is better in prayer to have a heart without words than words without a heart.

Each one has to find his peace from within. And peace to be real must be unaffected by outside circumstances.

The spirit of democracy is not a mechanical thing to be adjusted by abolition of forms. It requires change of heart.

Freedom is never dear at any price. It is the breath of life. What would a man not pay for living?

The only tyrant I accept in this world is the still voice within.

Non-violence and truth are inseparable and presuppose one another.

Intolerance is itself a form of violence and an obstacle to the growth of a true democratic spirit.

Man is supposed to be the maker of his destiny. It is only partly true. He can make his destiny, only in so far as he is allowed by the Great Power.

Before the throne of the Almighty, man will be judged not by his acts but by his intentions. For God alone reads our hearts.

Faith... must be enforced by reason... when faith becomes blind it dies.

The human voice can never reach the distance that is covered by the still small voice of conscience.

Let everyone try and find that as a result of daily prayer he adds something new to his life, something with which nothing can be compared.

Those who say religion has nothing to do with politics do not know what religion is.

I have nothing new to teach the world. Truth and Non-violence are as old as the hills. All I have done is to try experiments in both on as vast a scale as I could.

The main purpose of life is to live rightly, think rightly, act rightly. The soul must languish when we give all our thought to the body.

Non-violence is the article of faith.

In matters of conscience, the law of the majority has no place.

It has always been a mystery to me how men can feel themselves honoured by the humiliation of their fellow beings.

Glory lies in the attempt to reach one's goal and not in reaching it.

Truth stands, even if there be no public support. It is self-sustained.

If a man reaches the heart of his own religion, he has reached the heart of the others, too. There is only one God, and there are many paths to him.

Man becomes great exactly in the degree in which he works for the welfare of his fellow-men.