Father of Protestantism and Church Reformer 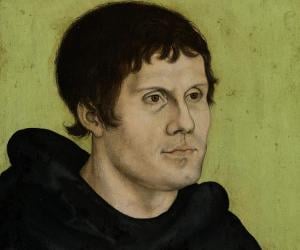 There’s one incident that shaped German Protestant theologian and reformer, Martin Luther’s future as a man of religion. Sometime after he began pursuing law at the University of Erfurt, the young Martin was stuck in a violent thunderstorm, on his way back from his parents’ house. The moment lightning struck close to him, he exclaimed, “St. Anne help me! I will become a monk.” Later, the young man, true to his word, joined the Black Monastery in Erfurt, in order to become a monk, much to his father’s frustration and disappointment.

The same Martin Luther was known for having outbursts of anger. A perfect example of his rage and sarcasm is the time when a younger philosopher kept asking Luther where God was all the while before the world came into existence. The famous scholar retorted, “He was building hell for such presumptuous, fluttering, and inquisitive spirits as you are.” To another student, who had a similar question as to what God had been doing before he went ahead and created the world, Dr. Luther snapped, “He sat under a birch tree cutting rods for those who ask nosy questions.” On yet another occasion, he was quite perturbed by the calm demeanor of his virtuous friend, Philipp Melanchthon and shouted at him, “For goodness’ sake, why don’t you go and sin a little? Doesn’t God deserve to have something to forgive you for!”

Let the wife make the husband glad to come home, and let him make her sorry to see him leave.

Every man must do two things alone; he must do his own believing and his own dying.

Everything that is done in the world is done by hope.

To be a Christian without prayer is no more possible than to be alive without breathing.

Even if I knew that tomorrow the world would go to pieces, I would still plant my apple tree.

Beautiful music is the art of the prophets that can calm the agitations of the soul; it is one of the most magnificent and delightful presents God has given us.

I cannot and will not recant anything, for to go against conscience is neither right nor safe. Here I stand, I can do no other, so help me God. Amen.

Faith is a living, daring confidence in God's grace, so sure and certain that a man could stake his life on it a thousand times.

God writes the Gospel not in the Bible alone, but also on trees, and in the flowers and clouds and stars.

Next to the Word of God, the noble art of music is the greatest treasure in the world.

For in the true nature of things, if we rightly consider, every green tree is far more glorious than if it were made of gold and silver.

Peace if possible, truth at all costs.

Be thou comforted, little dog, Thou too in Resurrection shall have a little golden tail.

If he have faith, the believer cannot be restrained. He betrays himself. He breaks out. He confesses and teaches this gospel to the people at the risk of life itself.

I am afraid that the schools will prove the very gates of hell, unless they diligently labor in explaining the Holy Scriptures and engraving them in the heart of the youth.

I have held many things in my hands, and I have lost them all; but whatever I have placed in God's hands, that I still possess.

There is no more lovely, friendly and charming relationship, communion or company than a good marriage.

Whatever your heart clings to and confides in, that is really your God.

You should not believe your conscience and your feelings more than the word which the Lord who receives sinners preaches to you.

The fewer the words, the better the prayer.

Our Lord has written the promise of resurrection, not in books alone, but in every leaf in springtime.

I am more afraid of my own heart than of the pope and all his cardinals. I have within me the great pope, Self.

Music is the art of the prophets and the gift of God.

Nothing good ever comes of violence.

All who call on God in true faith, earnestly from the heart, will certainly be heard, and will receive what they have asked and desired.

Reason is the enemy of faith.

My heart, which is so full to overflowing, has often been solaced and refreshed by music when sick and weary.

The Bible is the cradle wherein Christ is laid.

Faith must trample under foot all reason, sense, and understanding.

For where God built a church, there the Devil would also build a chapel.

Be a sinner and sin strongly, but more strongly have faith and rejoice in Christ.

Prayer is a strong wall and fortress of the church; it is a goodly Christian weapon.

If I am not allowed to laugh in heaven, I don't want to go there.

The God of this world is riches, pleasure and pride.

To gather with God's people in united adoration of the Father is as necessary to the Christian life as prayer.

I feel much freer now that I am certain the pope is the Antichrist.

Justice is a temporary thing that must at last come to an end; but the conscience is eternal and will never die.

When schools flourish, all flourishes.

People must have righteous principals in the first, and then they will not fail to perform virtuous actions.

When I am angry I can pray well and preach well.

The man who has the will to undergo all labor may win to any good.

Faith is permitting ourselves to be seized by the things we do not see.

First I shake the whole Apple tree, that the ripest might fall. Then I climb the tree and shake each limb, and then each branch and then each twig, and then I look under each leaf.

The Lord commonly gives riches to foolish people, to whom he gives nothing else.

Anyone who is to find Christ must first find the church. How could anyone know where Christ is and what faith is in him unless he knew where his believers are?

The reproduction of mankind is a great marvel and mystery. Had God consulted me in the matter, I should have advised him to continue the generation of the species by fashioning them out of clay.

I more fear what is within me than what comes from without.

If you young fellows were wise, the devil couldn't do anything to you, but since you aren't wise, you need us who are old.

If you are not allowed to laugh in heaven, I don't want to go there.

I shall never be a heretic; I may err in dispute, but I do not wish to decide anything finally; on the other hand, I am not bound by the opinions of men.

Grant that I may not pray alone with the mouth; help me that I may pray from the depths of my heart.