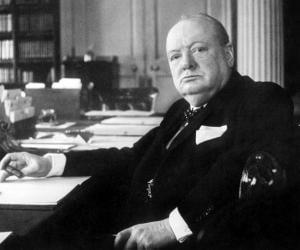 The political accomplishments of Winston Churchill are well known, but here’s something about this acclaimed politician that not many are aware of. Sources close to the former Prime Minister of the UK, remembered the man for his witty responses during conversations. There are several instances from the former British premier’s life that prove this fact.

Churchill had apparently attended a social event much before the outbreak of ‘World War I’. He had apparently spent his time in the company of a gentleman from the Italian military force as well as a diplomat from Luxembourg, at this event. Intrigued by the appearance of a medal the diplomat sported, the Italian military officer asked the man from Luxembourg what it denoted.

The diplomat responded by saying ‘It is an ancient order called the Royal Admiralty Cross’. The Italian man then turned towards the great Winston Churchill, who was the First Lord of The Admiralty back then. The military officer asked Winston, 'Why should they have an admiralty?' referring to the lack of a naval force in Luxembourg. Churchill displayed his witty side by saying 'You in Italy, after all, have a minister of finance - yet you don't have a treasury!'

There have been several other instances where Churchill had displayed his humorous side.  He was once spotted smoking at a museum by an officer, who quickly ran towards Winston and said ‘Sir you mustn’t smoke’. The witty Churchill replied ‘Don’t worry boy. I don’t inhale’. Thus, this episode went on to become a memorable one.

A lie gets halfway around the world before the truth has a chance to get its pants on.

If you're going through hell, keep going.

Attitude is a little thing that makes a big difference.

You can always count on Americans to do the right thing - after they've tried everything else.

You have enemies? Good. That means you've stood up for something, sometime in your life.

Success is not final, failure is not fatal: it is the courage to continue that counts.

The best argument against democracy is a five-minute conversation with the average voter.

We shape our buildings; thereafter they shape us.

I am fond of pigs. Dogs look up to us. Cats look down on us. Pigs treat us as equals.

I may be drunk, Miss, but in the morning I will be sober and you will still be ugly.

Socialism is a philosophy of failure, the creed of ignorance, and the gospel of envy, its inherent virtue is the equal sharing of misery.

All the great things are simple, and many can be expressed in a single word: freedom, justice, honor, duty, mercy, hope.

Success consists of going from failure to failure without loss of enthusiasm.

It is no use saying, 'We are doing our best.' You have got to succeed in doing what is necessary.

The truth is incontrovertible. Malice may attack it, ignorance may deride it, but in the end, there it is.

This is no time for ease and comfort. It is time to dare and endure.

An appeaser is one who feeds a crocodile, hoping it will eat him last.

Kites rise highest against the wind - not with it.

In wartime, truth is so precious that she should always be attended by a bodyguard of lies.

It is always wise to look ahead, but difficult to look further than you can see.

History is written by the victors.

A fanatic is one who can't change his mind and won't change the subject.

Russia is a riddle wrapped in a mystery inside an enigma.

I am always ready to learn although I do not always like being taught.

One ought never to turn one's back on a threatened danger and try to run away from it. If you do that, you will double the danger. But if you meet it promptly and without flinching, you will reduce the danger by half. Never run away from anything. Never!

Victory at all costs, victory in spite of all terror, victory however long and hard the road may be; for without victory, there is no survival.

If we open a quarrel between past and present, we shall find that we have lost the future.

History will be kind to me for I intend to write it.

I am an optimist. It does not seem too much use being anything else.

Courage is rightly esteemed the first of human qualities... because it is the quality which guarantees all others.

There is no such thing as public opinion. There is only published opinion.

The price of greatness is responsibility.

Never hold discussions with the monkey when the organ grinder is in the room.

This report, by its very length, defends itself against the risk of being read.

To build may have to be the slow and laborious task of years. To destroy can be the thoughtless act of a single day.

Nothing in life is so exhilarating as to be shot at without result.

If you have an important point to make, don't try to be subtle or clever. Use a pile driver. Hit the point once. Then come back and hit it again. Then hit it a third time - a tremendous whack.

Personally I'm always ready to learn, although I do not always like being taught.

Ending a sentence with a preposition is something up with which I will not put.

Without tradition, art is a flock of sheep without a shepherd. Without innovation, it is a corpse.

Politics is not a game. It is an earnest business.

I am easily satisfied with the very best.

We are masters of the unsaid words, but slaves of those we let slip out.

Healthy citizens are the greatest asset any country can have.

My most brilliant achievement was my ability to be able to persuade my wife to marry me.

Sure I am of this, that you have only to endure to conquer.

I have taken more out of alcohol than alcohol has taken out of me.

It has been said that democracy is the worst form of government except all the others that have been tried.

If you have ten thousand regulations you destroy all respect for the law.

To jaw-jaw is always better than to war-war.

We have always found the Irish a bit odd. They refuse to be English.

In war, you can only be killed once, but in politics, many times.

I never worry about action, but only inaction.

Never in the field of human conflict was so much owed by so many to so few.

Meeting Franklin Roosevelt was like opening your first bottle of champagne; knowing him was like drinking it.

'No comment' is a splendid expression. I am using it again and again.

I am prepared to meet my Maker. Whether my Maker is prepared for the great ordeal of meeting me is another matter.

We shall draw from the heart of suffering itself the means of inspiration and survival.

Criticism may not be agreeable, but it is necessary. It fulfils the same function as pain in the human body. It calls attention to an unhealthy state of things.

It is a good thing for an uneducated man to read books of quotations.

Man will occasionally stumble over the truth, but most of the time he will pick himself up and continue on.

Study history, study history. In history lies all the secrets of statecraft.

Politics is almost as exciting as war, and quite as dangerous. In war you can only be killed once, but in politics many times.

Although personally I am quite content with existing explosives, I feel we must not stand in the path of improvement.

It is a mistake to look too far ahead. Only one link of the chain of destiny can be handled at a time.

Solitary trees, if they grow at all, grow strong.

We are all worms. But I believe that I am a glow-worm.

Politics is the ability to foretell what is going to happen tomorrow, next week, next month and next year. And to have the ability afterwards to explain why it didn't happen.

He has all of the virtues I dislike and none of the vices I admire.

A politician needs the ability to foretell what is going to happen tomorrow, next week, next month, and next year. And to have the ability afterwards to explain why it didn't happen.

Mr. Attlee is a very modest man. Indeed he has a lot to be modest about.

We contend that for a nation to try to tax itself into prosperity is like a man standing in a bucket and trying to lift himself up by the handle.

No idea is so outlandish that it should not be considered with a searching but at the same time a steady eye.

I have nothing to offer but blood, toil, tears and sweat.

When we look back on all the perils through which we have passed and at the mighty foes that we have laid low and all the dark and deadly designs that we have frustrated, why should we fear for our future? We have come safely through the worst.

In the course of my life, I have often had to eat my words, and I must confess that I have always found it a wholesome diet.

I like a man who grins when he fights.

Everyone has his day and some days last longer than others.

Some people regard private enterprise as a predatory tiger to be shot. Others look on it as a cow they can milk. Not enough people see it as a healthy horse, pulling a sturdy wagon.

What kind of people do they think we are? Is it possible they do not realize that we shall never cease to persevere against them until they have been taught a lesson which they and the world will never forget?

Men occasionally stumble over the truth, but most of them pick themselves up and hurry off as if nothing had happened.

When you have to kill a man, it costs nothing to be polite.

There are two things that are more difficult than making an after-dinner speech: climbing a wall which is leaning toward you and kissing a girl who is leaning away from you.

Play the game for more than you can afford to lose... only then will you learn the game.