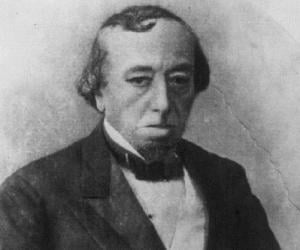 British
Political Leaders, Leaders, Prime Ministers
Disraeli, a "Conservative" and William Gladstone, a member of the "Liberal" party, were both phenomenal statesman with extraordinary abilities. However, both these politicians were also famous in the British political circle for being at loggerheads. Some people believed their equation had reached the pinnacle of political enmity and also turned into a matter of gossip and joke amongst commoners. Famous thinker and intellect Richard Aldous wrote a book about the rivalry of these great men, titled "The Lion and the Unicorn". There was one very famous incident that took place in both their lives and is remembered till date. One day Gladstone took a young lady out for dinner and the very day Disraeli also spent time with the same woman over a meal. After she went out with both the men, the young woman was questioned about her experiences and her reply left people flabbergasted. The lady apparently claimed that Gladstone gave her an impression that he was the cleverest man in England. But while speaking of her rendezvous with Benjamin, she said "I thought I was the cleverest woman in England." Benjamin was apparently attentive, charming and chivalrous, the proper gentleman according to this woman. Rather than display his own wit, he put her on the pedestal and made her feel so good about herself. It was rather befitting for her to think of Benjamin as gallant, subtle and extremely intelligent since he not only held the reins of Britain twice as a Prime Minister but also played a pivotal role in the formation of the "Conservative Party".

The greatest good you can do for another is not just to share your riches but to reveal to him his own.

Change is inevitable. Change is constant.

Life is too short to be little. Man is never so manly as when he feels deeply, acts boldly, and expresses himself with frankness and with fervor.

I am prepared for the worst, but hope for the best.

Courage is fire, and bullying is smoke.

There can be economy only where there is efficiency.

Action may not always bring happiness; but there is no happiness without action.

Youth is a blunder; Manhood a struggle, Old Age a regret.

Nurture your minds with great thoughts. To believe in the heroic makes heroes.

The secret of success is to be ready when your opportunity comes.

There are three kinds of lies: lies, damned lies, and statistics.

The secret of success is constancy to purpose.

Justice is truth in action.

One secret of success in life is for a man to be ready for his opportunity when it comes.

Seeing much, suffering much, and studying much, are the three pillars of learning.

Through perseverance many people win success out of what seemed destined to be certain failure.

We are all born for love. It is the principle of existence, and its only end.

Circumstances are beyond human control, but our conduct is in our own power.

It is much easier to be critical than to be correct.

Never take anything for granted.

Almost everything that is great has been done by youth.

The more extensive a man's knowledge of what has been done, the greater will be his power of knowing what to do.

I have brought myself, by long meditation, to the conviction that a human being with a settled purpose must accomplish it, and that nothing can resist a will which will stake even existence upon its fulfillment.

Diligence is the mother of good fortune.

A Conservative Government is an organized hypocrisy.

The palace is not safe when the cottage is not happy.

You can tell the strength of a nation by the women behind its men.

A consistent soul believes in destiny, a capricious one in chance.

To be conscious that you are ignorant of the facts is a great step to knowledge.

The Youth of a Nation are the trustees of posterity.

Two nations between whom there is no intercourse and no sympathy; who are as ignorant of each other's habits, thoughts, and feelings, as if they were dwellers in different zones, or inhabitants of different planets. The rich and the poor.

The first magic of love is our ignorance that it can ever end.

Plagiarists, at least, have the merit of preservation.

Power has only one duty - to secure the social welfare of the People.

Success is the child of audacity.

Silence is the mother of truth.

Fear makes us feel our humanity.

The wisdom of the wise and the experience of the ages are perpetuated by quotations.

A University should be a place of light, of liberty, and of learning.

In politics nothing is contemptible.

The world is governed by very different personages from what is imagined by those who are not behind the scenes.

No man is regular in his attendance at the House of Commons until he is married.

As a general rule, the most successful man in life is the man who has the best information.

It destroys one's nerves to be amiable every day to the same human being.

Beware of endeavoring to become a great man in a hurry. One such attempt in ten thousand may succeed. These are fearful odds.

William Gladstone has not a single redeeming defect.

I must follow the people. Am I not their leader?

There is no act of treachery or meanness of which a political party is not capable; for in politics there is no honour.

No Government can be long secure without a formidable Opposition.

A great city, whose image dwells in the memory of man, is the type of some great idea. Rome represents conquest; Faith hovers over the towers of Jerusalem; and Athens embodies the pre-eminent quality of the antique world, Art.

The health of the people is really the foundation upon which all their happiness and all their powers as a state depend.

Let the fear of a danger be a spur to prevent it; he that fears not, gives advantage to the danger.

The secret of success in life is for a man to be ready for his opportunity when it comes.

Man is only great when he acts from passion.

As for our majority... one is enough.

Talk to a man about himself and he will listen for hours.

Despair is the conclusion of fools.

Everyone likes flattery; and when you come to Royalty you should lay it on with a trowel.

If you're not very clever you should be conciliatory.

There is no index of character so sure as the voice.

Read no history: nothing but biography, for that is life without theory.

How much easier it is to be critical than to be correct.

The world is weary of statesmen whom democracy has degraded into politicians.

I repeat... that all power is a trust; that we are accountable for its exercise; that from the people and for the people all springs, and all must exist.

The choicest pleasures of life lie within the ring of moderation.

Colonies do not cease to be colonies because they are independent.

In a progressive country change is constant; change is inevitable.

Finality is not the language of politics.

We moralize among ruins.

Taking a new step, uttering a new word, is what people fear most.

London is a roost for every bird.

Nowadays, manners are easy and life is hard.

Grief is the agony of an instant; the indulgence of grief the blunder of a life.

Worry - a God, invisible but omnipotent. It steals the bloom from the cheek and lightness from the pulse; it takes away the appetite, and turns the hair gray.

He was distinguished for ignorance; for he had only one idea, and that was wrong.

Conservatism discards Prescription, shrinks from Principle, disavows Progress; having rejected all respect for antiquity, it offers no redress for the present, and makes no preparation for the future.

The right honourable gentleman caught the Whigs bathing, and walked away with their clothes. He has left them in the full enjoyment of their liberal positions, and he is himself a strict conservative of their garments.

Teach us that wealth is not elegance, that profusion is not magnificence, that splendor is not beauty.

London is a modern Babylon.

Moderation is the center wherein all philosophies, both human and divine, meet.

My idea of an agreeable person is a person who agrees with me.

To tax the community for the advantage of a class is not protection: it is plunder.

Moderation has been called a virtue to limit the ambition of great men, and to console undistinguished people for their want of fortune and their lack of merit.

Damn your principles! Stick to your party.

Frank and explicit - that is the right line to take when you wish to conceal your own mind and confuse the minds of others.