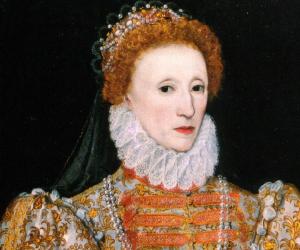 Right from the day Elizabeth held the reins of her kingdom, the question about who she will marry started doing the rounds. However, contrary to people’s expectations, she never tied the knot and was the last scion of the ‘Tudor’ dynasty. Also referred to as ‘The Virgin Queen’, historians believed that she never married in order to hide her inability to conceive.

However, it has been claimed that the monarch dated many men until she was 50. Apparently, the last man Elizabeth romanced was Francis, the Duke of Anjou, whom the Queen fondly referred to as ‘Her Frog’. It was noticed that once their relationship began, the lady in power started wearing frog-shaped earrings, probably as a symbol of their love.

Many opine that the Duke, who was 22 years younger to her, didn’t mind being teased by Elizabeth in this manner and apparently he loved it. The queen is always remembered as a lady who was fond of beauty products. It is said that she used to heavily rely on these cosmetics, which made her look ghostly fair.

Since it was a fashion statement at that time, people felt that make-up made Elizabeth seem extremely attractive. Actually, the fact was that she used it to hide the scars on her face that were caused by the epidemic Smallpox that she was affected with. This lady, who held the reins of her kingdom for about 44 years, spoke many languages such as English, Latin, Greek, Italian, French, Spanish, Welsh, which speaks volumes about her memory and grasping power.

There is nothing about which I am more anxious than my country, and for its sake I am willing to die ten deaths, if that be possible.

Nothing Country
Elizabeth I
0
0

I know I have the body of a weak and feeble woman, but I have the heart and stomach of a king, and of a king of England too.

Do not tell secrets to those whose faith and silence you have not already tested.

The past cannot be cured.

Past Time
Elizabeth I
0
0

God forgive you, but I never can.

All my possessions for a moment of time.

A strength to harm is perilous in the hand of an ambitious head.

A clear and innocent conscience fears nothing.

Nothing Conscience
Elizabeth I
0
0

I would rather be a beggar and single than a queen and married.

One man with a head on his shoulders is worth a dozen without.

My mortal foe can no ways wish me a greater harm than England's hate; neither should death be less welcome unto me than such a mishap betide me.

A fool too late bewares when all the peril is past.

If thy heart fails thee, climb not at all.

To be a king and wear a crown is a thing more glorious to them that see it than it is pleasant to them that bear it.

Must! Is must a word to be addressed to princes? Little man, little man! Thy father, if he had been alive, durst not have used that word.

Brass shines as fair to the ignorant as gold to the goldsmiths.

I do not want a husband who honours me as a queen, if he does not love me as a woman.

Fear not, we are of the nature of the lion, and cannot descend to the destruction of mice and such small beasts.

I would rather go to any extreme than suffer anything that is unworthy of my reputation, or of that of my crown.

I do not choose that my grave should be dug while I am still alive.

God has given such brave soldiers to this Crown that, if they do not frighten our neighbours, at least they prevent us from being frightened by them.

The word must is not to be used to princes.

I shall lend credit to nothing against my people which parents would not believe against their own children.

Nothing People
Elizabeth I
0
0

Those who appear the most sanctified are the worst.

Where might is mixed with wit, there is too good an accord in a government.

Where minds differ and opinions swerve there is scant a friend in that company.

I have the heart of a man, not a woman, and I am not afraid of anything.

I pray to God that I shall not live one hour after I have thought of using deception.

There is one thing higher than Royalty: and that is religion, which causes us to leave the world, and seek God.

The stone often recoils on the head of the thrower.

He who placed me in this seat will keep me here.

Though I am not imperial, and though Elizabeth may not deserve it, the Queen of England will easily deserve to have an emperor's son to marry.

If we still advise we shall never do.

Monarchs ought to put to death the authors and instigators of war, as their sworn enemies and as dangers to their states.

Ye may have a greater prince, but ye shall never have a more loving prince.

I find that I sent wolves not shepherds to govern Ireland, for they have left me nothing but ashes and carcasses to reign over!

The end crowneth the work.