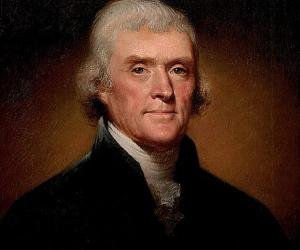 There’s probably not a single soul who doesn’t know about Thomas Jefferson’s friendship with John Adams. Given that Adams preceded Thomas as the American President, most people would have expected them to have their share of squabbles. And that they did, what with Adams being called a eunuch and Jefferson’s lineage being insulted. However, they soon struck up a bond that very few have been able to replicate. Between their interest in drafting the Declaration of Independence and the eerie coincidence of them both dying on the fourth of July, the same year, the two Presidents had similar tastes in literature.

True, politics was always something they bickered about, but the greatest playwright of all time, William Shakespeare gave them an extensive topic to agree upon. Jefferson and his closest friend were both ardent Shakespeare fanatics. Though Thomas had watched performances of ‘The Merchant of Venice’ and ‘Macbeth’, he insisted that there was no better way of appreciating the dramatist’s talent than by reading his plays. The US President even declared, “Shakespeare must be signaled out by one who wishes to learn the full powers of the English language.”

On one particular day in 1786, both Adams and Jefferson traveled to England to pay a visit to Shakespeare’s childhood home. Despite all the expenses he grudgingly bore, Thomas kissed the ground the moment he reached the Elizabethan bard’s house, as a mark of respect. That was the amount of love and reverence America’s founding father had for the English playwright.

Educate and inform the whole mass of the people... They are the only sure reliance for the preservation of our liberty.

A coward is much more exposed to quarrels than a man of spirit.

Every citizen should be a soldier. This was the case with the Greeks and Romans, and must be that of every free state.

The happiest moments of my life have been the few which I have passed at home in the bosom of my family.

It is always better to have no ideas than false ones; to believe nothing, than to believe what is wrong.

I think with the Romans, that the general of today should be a soldier tomorrow if necessary.

I find friendship to be like wine, raw when new, ripened with age, the true old man's milk and restorative cordial.

Advertisements contain the only truths to be relied on in a newspaper.

Always take hold of things by the smooth handle.

An enemy generally says and believes what he wishes.

There is not a truth existing which I fear... or would wish unknown to the whole world.

I hope we shall crush in its birth the aristocracy of our monied corporations which dare already to challenge our government to a trial by strength, and bid defiance to the laws of our country.

They (preachers) dread the advance of science as witchesdo the approach of daylight and scowl on the fatal harbinger announcing the subversions of the duperies on which they live.Â

It is error alone which needs the support of government. Truth can stand by itself.

I tremble for my country when I reflect that God is just; that his justice cannot sleep forever.

It does me no injury for my neighbor to say there are twenty gods or no God.

Peace and friendship with all mankind is our wisest policy, and I wish we may be permitted to pursue it.