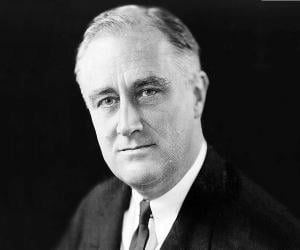 Harvard College, Columbia Law School
Political Leaders, Leaders, Presidents, Lawyers & Judges, Lawyers
Former American President Franklin D Roosevelt had won the hearts of many ardent followers during the course of his career. It didn't matter that "New York Herald Tribune" columnist, Walter Lippmann opined about him, "He is a pleasant man who, without any important qualifications for the office, would very much like to be President". It is this interesting characteristic trait that Roosevelt employed during a meeting of his with British Prime Minister Winston Churchill and Soviet leader, Joseph Stalin. Initially Roosevelt found it quite hard to break the ice with the rather stern-faced Stalin (nicknamed "the old buzzard" by the American President), but soon he decided to change his approach. The following day, before their conference started, Franklin Roosevelt told the British statesman as a warning, "Winston, I hope you won't be sore at me for what I'm going to do". Unbeknownst to Churchill, the English diplomat was made the butt of all jokes, be it his famous love for cigars or John Bull, a figure used to glorify England. This continued for quite some time till Winston Churchill was fuming with rage and Stalin was cracking up with laughter. Finally, the deed was done, and the great American leader had managed to cut through the Soviet chief's cold demeanour. With his peerless sense of humor, Roosevelt had not only befriended the uncommunicative Stalin, but had also taken the liberty of calling the latter, "Uncle Joe".

In politics, nothing happens by accident. If it happens, you can bet it was planned that way.

We have always held to the hope, the belief, the conviction that there is a better life, a better world, beyond the horizon.

The only thing we have to fear is fear itself.

There are as many opinions as there are experts.

Democracy cannot succeed unless those who express their choice are prepared to choose wisely. The real safeguard of democracy, therefore, is education.

Take a method and try it. If it fails, admit it frankly, and try another. But by all means, try something.

Let us never forget that government is ourselves and not an alien power over us. The ultimate rulers of our democracy are not a President and senators and congressmen and government officials, but the voters of this country.

A conservative is a man with two perfectly good legs who, however, has never learned how to walk forward.

If civilization is to survive, we must cultivate the science of human relationships - the ability of all peoples, of all kinds, to live together, in the same world at peace.

When you reach the end of your rope, tie a knot in it and hang on.

It is common sense to take a method and try it. If it fails, admit it frankly and try another. But above all, try something.

The only sure bulwark of continuing liberty is a government strong enough to protect the interests of the people, and a people strong enough and well enough informed to maintain its sovereign control over the goverment.

Happiness lies in the joy of achievement and the thrill of creative effort.

Confidence... thrives on honesty, on honor, on the sacredness of obligations, on faithful protection and on unselfish performance. Without them it cannot live.

There are many ways of going forward, but only one way of standing still.

I ask you to judge me by the enemies I have made.

Rules are not necessarily sacred, principles are.

True individual freedom cannot exist without economic security and independence. People who are hungry and out of a job are the stuff of which dictatorships are made.

Yesterday, December seventh, 1941, a date which will live in infamy, the United States of America was suddenly and deliberately attacked by naval and air forces of the Empire of Japan. We will gain the inevitable triumph, so help us God.

Human kindness has never weakened the stamina or softened the fiber of a free people. A nation does not have to be cruel to be tough.

A nation that destroys its soils destroys itself. Forests are the lungs of our land, purifying the air and giving fresh strength to our people.

The only limit to our realization of tomorrow will be our doubts of today.

The point in history at which we stand is full of promise and danger. The world will either move forward toward unity and widely shared prosperity - or it will move apart.

It isn't sufficient just to want - you've got to ask yourself what you are going to do to get the things you want.

Be sincere; be brief; be seated.

It is an unfortunate human failing that a full pocketbook often groans more loudly than an empty stomach.

Competition has been shown to be useful up to a certain point and no further, but cooperation, which is the thing we must strive for today, begins where competition leaves off.

I'm not the smartest fellow in the world, but I can sure pick smart colleagues.

If you treat people right they will treat you right... ninety percent of the time.

The truth is found when men are free to pursue it.

When you see a rattlesnake poised to strike, you do not wait until he has struck to crush him.

Self-interest is the enemy of all true affection.

One thing is sure. We have to do something. We have to do the best we know how at the moment... If it doesn't turn out right, we can modify it as we go along.

We are trying to construct a more inclusive society. We are going to make a country in which no one is left out.

I pledge you, I pledge myself, to a new deal for the American people.

Remember you are just an extra in everyone else's play.

There is nothing I love as much as a good fight.

It takes a long time to bring the past up to the present.

Prosperous farmers mean more employment, more prosperity for the workers and the business men of every industrial area in the whole country.

The United States Constitution has proved itself the most marvelously elastic compilation of rules of government ever written.

Here is my principle: Taxes shall be levied according to ability to pay. That is the only American principle.

We continue to recognize the greater ability of some to earn more than others. But we do assert that the ambition of the individual to obtain for him a proper security is an ambition to be preferred to the appetite for great wealth and great power.

Not only our future economic soundness but the very soundness of our democratic institutions depends on the determination of our government to give employment to idle men.

I am a Christian and a Democrat, that's all.

I am neither bitter nor cynical but I do wish there was less immaturity in political thinking.

In our personal ambitions we are individualists. But in our seeking for economic and political progress as a nation, we all go up or else all go down as one people.

Favor comes because for a brief moment in the great space of human change and progress some general human purpose finds in him a satisfactory embodiment.

More than an end to war, we want an end to the beginning of all wars - yes, an end to this brutal, inhuman and thoroughly impractical method of settling the differences between governments.

Those newspapers of the nation which most loudly cried dictatorship against me would have been the first to justify the beginnings of dictatorship by somebody else.

In our seeking for economic and political progress, we all go up - or else we all go down.

Art is not a treasure in the past or an importation from another land, but part of the present life of all living and creating peoples.

The school is the last expenditure upon which America should be willing to economize.

It is fun to be in the same decade with you.

A reactionary is a somnambulist walking backwards.

Don't forget what I discovered that over ninety percent of all national deficits from 1921 to 1939 were caused by payments for past, present, and future wars.

Our national determination to keep free of foreign wars and foreign entanglements cannot prevent us from feeling deep concern when ideals and principles that we have cherished are challenged.

Whoever seeks to set one religion against another seeks to destroy all religion.

If I went to work in a factory the first thing I'd do is join a union.

I do not look upon these United States as a finished product. We are still in the making.

But while they prate of economic laws, men and women are starving. We must lay hold of the fact that economic laws are not made by nature. They are made by human beings.

Put two or three men in positions of conflicting authority. This will force them to work at loggerheads, allowing you to be the ultimate arbiter.

The overwhelming majority of Americans are possessed of two great qualities a sense of humor and a sense of proportion.

It is the duty of the President to propose and it is the privilege of the Congress to dispose.

No government can help the destinies of people who insist in putting sectional and class consciousness ahead of general weal.

No group and no government can properly prescribe precisely what should constitute the body of knowledge with which true education is concerned.

War is a contagion.

We must lay hold of the fact that economic laws are not made by nature. They are made by human beings.

Are you laboring under the impression that I read these memoranda of yours? I can't even lift them.

This generation of Americans has a rendezvous with destiny.

I believe that in every country the people themselves are more peaceably and liberally inclined than their governments.

If we can boondoggle ourselves out of this depression, that word is going to be enshrined in the hearts of the American people for years to come.