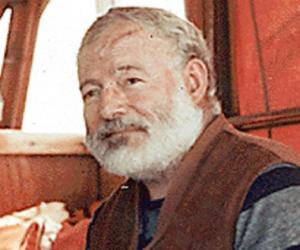 ‘A Farewell to Arms’ author, Ernest Hemingway was a colorful personality—blunt, extroverted with an extremely high opinion of his talent. He was great friends with contemporary writer, F. Scott Fitzgerald, and their relationship (though short-lived owing to their respective careers) created fascinating stories that we recount even today. Once Zelda, Fitzgerald’s wife, complained that her husband was incapable of satiating her sexual needs. Such an observation of course saddened ‘The Great Gatsby’ writer and he chose to confide in his friend Hemingway.

He took Hemingway with him to a public restroom in Paris and took off his pants, eager for an honest opinion. Ernest complimented Scott’s man part and for further encouragement advised that he visit the Louvre so that he could compare it with what the statues had. This hilarious incident was later retold by Hemingway in his narrative, ‘A Moveable Feast’.

Later, the two exceptional novelists continued to be in touch through letters. In one such letter, Fitzgerald advised Ernest how to write the perfect ending to ‘A Farewell to Arms’. Hemingway wasn’t too happy about being told how to write, and replied with a “Kiss my ass”. The same Hemingway sent Fitzgerald a correspondence, suggesting the latter should “toss two parts of his manhood into the sea, if he even had them anymore”. This remark came right after Scott had published the essay, ‘The Crack Up’.

Once we have a war there is only one thing to do. It must be won. For defeat brings worse things than any that can ever happen in war.

The world is a fine place and worth the fighting for and I hate very much to leave it.

No weapon has ever settled a moral problem. It can impose a solution but it cannot guarantee it to be a just one.

There is no lonelier man in death, except the suicide, than that man who has lived many years with a good wife and then outlived her. If two people love each other there can be no happy end to it.

When you have shot one bird flying you have shot all birds flying. They are all different and they fly in different ways but the sensation is the same and the last one is as good as the first.

For a war to be just three conditions are necessary - public authority, just cause, right motive.

To be a successful father...there's one absolute rule: when you have a kid, don't look at it for the first two years.

The good parts of a book may be only something a writer is lucky enough to overhear or it may be the wreck of his whole damn life and one is as good as the other.

When writing a novel a writer should create living people; people not characters. A character is a caricature.

They wrote in the old days that it is sweet and fitting to die for one's country. But in modern war, there is nothing sweet nor fitting in your dying. You will die like a dog for no good reason.

The age demanded that we dance and jammed us into iron pants. And in the end the age was handed the sort of shit that it demanded.

Bullfighting is the only art in which the artist is in danger of death and in which the degree of brilliance in the performance is left to the fighter's honor.

Always do sober what you said you'd do drunk. That will teach you to keep your mouth shut.

Courage is grace under pressure.

Fear of death increases in exact proportion to increase in wealth.

An intelligent man is sometimes forced to be drunk to spend time with his fools.

All my life I've looked at words as though I were seeing them for the first time.

If you have a success you have it for the wrong reasons. If you become popular it is always because of the worst aspects of your work.