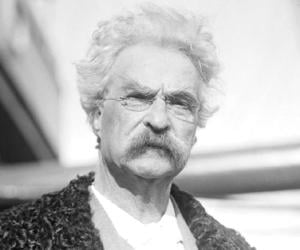 American
Writers, Novelists, Short Story Writers, Non-Fiction Writers, Essayists
While speaking of legends from the world of literature, this man's accomplishments definitely deserves a mention. Some of these man's works have left a lasting impression on the minds of many and have even inspired a few to embrace writing as a medium of expression. Like many other greats of the world, this writer too belonged to a humble economic background and faced a lot of adversities during his younger days. When he was barely eleven, this eminent personality lost his father to Pneumonia and had to even give up on his education to make ends meet. The young lad had to assist a printer to afford a meal following the demise of his parent. A few years later, this acclaimed writer revealed his creative side to the world, when several sketches of his were published in the "Hannibal Journal". The youngster kept himself busy with a few trysts as a printer, but couldn't continue his studies which ended abruptly. However, this man started educating himself by taking time off his busy schedules and confining himself to public libraries for a fixed duration, on a daily basis. In his own words, this kind of education enhanced the writer's personality a lot more compared to the way a school would prepare a ward for the difficult world. This writer's life took a dramatic turn after an article of his, which was published in the newspaper "Territorial Enterprise", received immense acclaim. Since then, there has been no looking back for this creative genius and most of his works such as "The Adventures of Tom Sawyer" became milestones in English literature. Yes, you guessed that right, we are talking about none other than the renowned author Mark Twain.

All you need in this life is ignorance and confidence, and then success is sure.

Good friends, good books and a sleepy conscience: this is the ideal life.

A person who won't read has no advantage over one who can't read.

It is better to keep your mouth closed and let people think you are a fool than to open it and remove all doubt.

The secret of getting ahead is getting started.

Whenever you find yourself on the side of the majority, it is time to pause and reflect.

If you tell the truth, you don't have to remember anything.

There are basically two types of people. People who accomplish things, and people who claim to have accomplished things. The first group is less crowded.

The best way to cheer yourself up is to try to cheer somebody else up.

Age is an issue of mind over matter. If you don't mind, it doesn't matter.

Anger is an acid that can do more harm to the vessel in which it is stored than to anything on which it is poured.

Apparently there is nothing that cannot happen today.

The fear of death follows from the fear of life. A man who lives fully is prepared to die at any time.

Get your facts first, then you can distort them as you please.

Kindness is the language which the deaf can hear and the blind can see.

Patriotism is supporting your country all the time, and your government when it deserves it.

Be careful about reading health books. You may die of a misprint.

Do the right thing. It will gratify some people and astonish the rest.

Let us endeavor so to live so that when we come to die even the undertaker will be sorry.

Few things are harder to put up with than the annoyance of a good example.

Courage is resistance to fear, mastery of fear, not absence of fear.

When you fish for love, bait with your heart, not your brain.

I am an old man and have known a great many troubles, but most of them never happened.

When your friends begin to flatter you on how young you look, it's a sure sign you're getting old.

Life would be infinitely happier if we could only be born at the age of eighty and gradually approach eighteen.

Buy land, they're not making it anymore.

The human race has one really effective weapon, and that is laughter.

Drag your thoughts away from your troubles... by the ears, by the heels, or any other way you can manage it.

A man's character may be learned from the adjectives which he habitually uses in conversation.

We have the best government that money can buy.

Clothes make the man. Naked people have little or no influence on society.

Forgiveness is the fragrance that the violet sheds on the heel that has crushed it.

A man who carries a cat by the tail learns something he can learn in no other way.

Truth is stranger than fiction, but it is because Fiction is obliged to stick to possibilities; Truth isn't.

Don't part with your illusions. When they are gone, you may still exist, but you have ceased to live.

It usually takes me more than three weeks to prepare a good impromptu speech.

Wrinkles should merely indicate where smiles have been.

The reports of my death have been greatly exaggerated.

Cauliflower is nothing but cabbage with a college education.

In the first place, God made idiots. That was for practice. Then he made school boards.

I can live for two months on a good compliment.

I came in with Halley's Comet in 1835. It is coming again next year, and I expect to go out with it. It will be the greatest disappointment of my life if I don't go out with Halley's Comet. The Almighty has said, no doubt: 'Now here are these two unaccountable freaks; they came in together, they must go out together.'

All generalizations are false, including this one.

There are lies, damned lies and statistics.

The right word may be effective, but no word was ever as effective as a rightly timed pause.

If you hold a cat by the tail you learn things you cannot learn any other way.

Man was made at the end of the week's work, when God was tired.

Thunder is good, thunder is impressive; but it is lightning that does the work.

It is curious that physical courage should be so common in the world and moral courage so rare.

Never pick a fight with people who buy ink by the barrel.

You can't depend on your eyes when your imagination is out of focus.

Never put off till tomorrow what you can do the day after tomorrow.

My mother had a great deal of trouble with me, but I think she enjoyed it.

The finest clothing made is a person's own skin, but, of course, society demands something more than this.

It's no wonder that truth is stranger than fiction. Fiction has to make sense.

A person with a new idea is a crank until the idea succeeds.

Golf is a good walk spoiled.

I didn't attend the funeral, but I sent a nice letter saying I approved of it.

The trouble ain't that there is too many fools, but that the lightning ain't distributed right.

It ain't those parts of the Bible that I can't understand that bother me, it is the parts that I do understand.

A man cannot be comfortable without his own approval.

When we remember we are all mad, the mysteries disappear and life stands explained.

Honesty is the best policy - when there is money in it.

It is better to deserve honors and not have them than to have them and not deserve them.

The secret source of humor is not joy but sorrow; there is no humor in Heaven.

Part of the secret of a success in life is to eat what you like and let the food fight it out inside.

There is no sadder sight than a young pessimist.

Many a small thing has been made large by the right kind of advertising.

Do the thing you fear most and the death of fear is certain.

Truth is the most valuable thing we have. Let us economize it.

I never smoke to excess - that is, I smoke in moderation, only one cigar at a time.

Giving up smoking is the easiest thing in the world. I know because I've done it thousands of times.

Man is the only animal that blushes - or needs to.

But who prays for Satan? Who, in eighteen centuries, has had the common humanity to pray for the one sinner that needed it most?

Travel is fatal to prejudice, bigotry, and narrow-mindedness, and many of our people need it sorely on these accounts.

The lack of money is the root of all evil.

Principles have no real force except when one is well-fed.

Civilization is the limitless multiplication of unnecessary necessities.

Everything has its limit - iron ore cannot be educated into gold.

When in doubt tell the truth.

God made the Idiot for practice, and then He made the School Board.

It is just like man's vanity and impertinence to call an animal dumb because it is dumb to his dull perceptions.

Lord save us all from old age and broken health and a hope tree that has lost the faculty of putting out blossoms.

Thousands of geniuses live and die undiscovered - either by themselves or by others.

The very ink with which history is written is merely fluid prejudice.

Work is a necessary evil to be avoided.