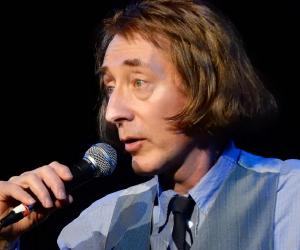 Stand-up comedian Emo Philips has an uncanny ability to draw uproars of laughter when asked about the ‘worst’ situations he has faced in life. He was once asked about the worst job he had ever been employed in. He recounted the time he had been hired by a local Kentucky Fried Chicken outlet at the age of sixteen. His workload included cleaning up the kitchen at the back for the lowest possible wages. However, the perk of the job was that Philips got to eat as much chicken as he could. On the first night, his boss pushed him harder to put in some muscle into the cleaning. Though the lanky Emo tried his best, the cranky boss just wasn’t happy with his effort and proceeded to fire the young boy. However, the entertainer claims that the quantity of chicken he lugged back home was more than he could have ever afforded with his meagre salary. He’s also thankful that he lost the job or else he would have gained so much weight that he wouldn’t have been able to move.

Another question that garnered a similar sad yet humorous response was about the worst living conditions he has ever faced. Emo went on to describe the time he was being housed at an acquaintance’s place. The friend had three pet rats in the other room, and Philips gradually began falling terribly sick, with his asthma worsening by the day. But that wasn’t enough, as he says, “And then noisy roommates. And then people having sex next to you. And then people having sex next to you in another room.”

I got some new underwear the other day. Well, new to me.

At my lemonade stand I used to give the first glass away free and charge five dollars for the second glass. The refill contained the antidote.

You don't appreciate a lot of stuff in school until you get older. Little things like being spanked every day by a middle-aged woman: Stuff you pay good money for in later life.

I love to go to the playground and watch the children jumping up and down. They don't know I'm firing blanks.

A computer once beat me at chess, but it was no match for me at kick boxing.

Always remember the last words of my grandfather, who said: 'A truck!'

When I wake up in the morning, I just can't get started until I've had that first, piping hot pot of coffee. Oh, I've tried other enemas.

Some mornings, it's just not worth chewing through the leather straps.

When I was a kid I used to pray every night for a new bicycle. Then I realised that the Lord doesn't work that way so I stole one and asked Him to forgive me.

I was the kid next door's imaginary friend.

I go from stool to stool in singles bars hoping to get lucky, but there's never any gum under any of them.

The way I understand it, the Russians are sort of a combination of evil and incompetence... sort of like the Post Office with tanks.

I discovered my wife in bed with another man, and I was crushed. So I said, 'Get off me, you two!'

My classmates would copulate with anything that moved, but I never saw any reason to limit myself.

I was with this girl the other night and from the way she was responding to my skillful caresses, you would have sworn that she was conscious from the top of her head to the tag on her toes.

I once heard two ladies going on and on about the pains of childbirth and how men don't seem to know what real pain is. I asked if either of them ever got themselves caught in a zipper.

How many people here have telekenetic powers? Raise my hand.

You know what I hate? Indian givers... no, I take that back.

I once had a large gay following, but I ducked into an alleyway and lost him.

I was walking down fifth avenue today and I found a wallet, and I was gonna keep it, rather than return it, but I thought: well, if I lost a hundred and fifty dollars, how would I feel? And I realized I would want to be taught a lesson.

Whatever happened to the good ole days, when children worked in factories?

I asked my girlfriend, 'Will you marry me?' She said, 'We'll have to ask my father.' So we had a seance and Jack Ruby says, 'Hello!'

I was at a bar nursing a beer. My nipple was getting quite soggy.

Probably the worst time in a person's life is when they have to kill a family member because they are the devil. But otherwise it's been a pretty good day.

I love to go down to the schoolyard and watch all the little children jump up and down and run around yelling and screaming. They don't know I'm only using blanks.

He taught me never to smile, which helps me when I visit disaster sites.

Well, my brother says Hello. So, hooray for speech therapy.

People always ask me, 'Where were you when Kennedy was shot?' Well, I don't have an alibi.

I was sleeping the other night, alone, thanks to the exterminator.

England is better only because I stand out there as 'unusual'.

I was in a bar the other night, hopping from barstool to barstool, trying to get lucky, but there wasn't any gum under any of them.

People come up to me... concerned... that I'll reproduce.

My jokes are in my head and I have a duplicate copy of my jokes in a lot of British comics' heads, where they are safe.

In our school you were searched for guns and knifes on the way in and if you didn't have any, they gave you some.

You know, at parties, people always ask, 'Where were you when Kennedy was shot?' Well, I don't have an alibi!

Actually, my cd was released in 1985, in return for two German missionaries and a Dutch urologist.

Probably the toughest time in anyone's life is when you have to murder a loved one because they're the devil.