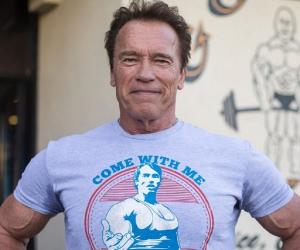 Santa Monica College, 1979 - University of Wisconsinâ€“Superior
Actors, Political Leaders, Film & Theater Personalities, Leaders
"I'll be back" said the famous character from the blockbuster flick "The Terminator" and little did the cast and crew know that the catchphrase will become so popular. This legendary line found a spot on the American Film Institute's "100 Years...100 Movie Quotes" list. When Arnold Schwarzenegger was given the line, the actor recounts that he had difficulty in pronouncing the word I'll. He approached director James Cameron and asked if he could change it to 'I will be back', adding that a robot will not use the contracted form. Hearing this, a furious Cameron retorted, "I don't correct your acting, so don't correct my f------ writing. What's the matter with you, Arnold?" The phrase has since then become a sort of identity of the "Terminator" star Arnold and he has used it frequently in many of his movies, including "Commando", "Jingle All the Way" and "The Expendables 2". Despite hailing from a modest family, Arnold was a self-made millionaire by the time he was 30. In 2003, he was appointed the Governor of California and he completed two terms before leaving office in 2011. The same year, he also separated from Maria Shriver, his wife of twenty-five years. He took the separation too hard and Maria advised him to seek counseling. Though the actor complied, he has said that it was the biggest mistake of his life. "... It was the biggest mistake I've ever made because that guy was so full of sh--." However, the actor also maintains that he has nothing against psychiatrists and opines that "I think people should get help when they need help ... I'm not against that, but in my particular case it was not helpful." This legendary actor turned politician has uttered a few golden words not only in his movies but also in real life. These quotes by Arnold will surely inspire you to take any challenges in life head on.

For me life is continuously being hungry. The meaning of life is not simply to exist, to survive, but to move ahead, to go up, to achieve, to conquer.

I feel good because I believe I have made progress in rebuilding the people's trust in their government.

Milk is for babies. When you grow up you have to drink beer.

Bodybuilding is much like any other sport. To be successful, you must dedicate yourself 100% to your training, diet and mental approach.

I know a lot of athletes and models are written off as just bodies. I never felt used for my body.

I think that gay marriage should be between a man and a woman.

My body is like breakfast, lunch, and dinner. I don't think about it, I just have it.

I have a love interest in every one of my films - a gun.

My relationship to power and authority is that I'm all for it. People need somebody to watch over them. Ninety-five percent of the people in the world need to be told what to do and how to behave.

Thanksgiving Day is a jewel, to set in the hearts of honest men; but be careful that you do not take the day, and leave out the gratitude.

The best activities for your health are pumping and humping.

You know, nothing is more important than education, because nowhere are our stakes higher; our future depends on the quality of education of our children today.

The facts are there that we have created, man has, a self-inflicted wound through global warming.