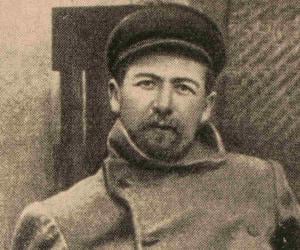 Russian
Writers, Short Story Writers
In 1876 Pavel Yegorovich Chekhov, a Russian grocery store owner was stone broke and under severe debt due to the excess money he spent for building his house. Fearful of being thrown behind bars, he sought refuge with his family in Moscow and left Taganrog, a port city in Russia. One of their dutiful sons stayed back and did all odd jobs possible to pay for his education. The young lad also did his best to send every penny that he could save, back to his parents who were living in a hand to mouth situation along with small notes to boost their spirits. This 16-year-old boy grew up into a flamboyant personality, shouldered the responsibility of the family both emotionally and financially. He is now remembered as Anton Chekhov, one of the greatest Russian writers who ever lived. The writer also worked as a doctor and juggled the two professions for a long time. However, Chekhov apparently loved both the professions so much that he called medicine his lawful wife and literature his mistress. Though he had tried his hand at writing only in an effort to make ends meet, his work has now changed the dynamics of modern short stories. "The Cherry Orchard", "Three Sisters" and "Uncle Vanya" are some of his famous plays that are widely read and admired till date. Chekhov has also been graced with the "Pushkin Prize". It is an award given by the "Russian Academy of Sciences" to all those people who have done phenomenal work in the field of literature.

Any idiot can face a crisis - it's day to day living that wears you out.

You must trust and believe in people or life becomes impossible.

Medicine is my lawful wife and literature my mistress; when I get tired of one, I spend the night with the other.

Let us learn to appreciate there will be times when the trees will be bare, and look forward to the time when we may pick the fruit.

Love, friendship and respect do not unite people as much as a common hatred for something.

Knowledge is of no value unless you put it into practice.

People don't notice whether it's winter or summer when they're happy.

Don't tell me the moon is shining; show me the glint of light on broken glass.

We shall find peace. We shall hear angels, we shall see the sky sparkling with diamonds.

If you cry 'forward', you must without fail make plain in what direction to go.

When a lot of remedies are suggested for a disease, that means it can't be cured.

If you are afraid of loneliness, do not marry.

There is nothing new in art except talent.

Doctors are the same as lawyers; the only difference is that lawyers merely rob you, whereas doctors rob you and kill you too.

No psychologist should pretend to understand what he does not understand... Only fools and charlatans know everything and understand nothing.

A writer is not a confectioner, a cosmetic dealer, or an entertainer.

The sea has neither meaning nor pity.

Man is what he believes.

The University brings out all abilities, including incapability.

Advertising is the very essence of democracy.

No matter how corrupt and unjust a convict may be, he loves fairness more than anything else. If the people placed over him are unfair, from year to year he lapses into an embittered state characterized by an extreme lack of faith.

To advise is not to compel.

To judge between good or bad, between successful and unsuccessful would take the eye of a God.

The world perishes not from bandits and fires, but from hatred, hostility, and all these petty squabbles.

Faith is an aptitude of the spirit. It is, in fact, a talent: you must be born with it.

People who lead a lonely existence always have something on their minds that they are eager to talk about.

I promise to be an excellent husband, but give me a wife who, like the moon, will not appear every day in my sky.

Reason and justice tell me there's more love for humanity in electricity and steam than in chastity and vegetarianism.

Money, like vodka, turns a person into an eccentric.

One must be a god to be able to tell successes from failures without making a mistake.

All of life and human relations have become so incomprehensibly complex that, when you think about it, it becomes terrifying and your heart stands still.

When an actor has money he doesn't send letters, he sends telegrams.

Passion must be concealed in a society where cold reserve and indifference are the signs of good breeding.

Life does not agree with philosophy: There is no happiness that is not idleness, and only what is useless is pleasurable.

We learn about life not from plusses alone, but from minuses as well.

When you're thirsty and it seems that you could drink the entire ocean, that's faith; when you start to drink and finish only a glass or two, that's science.

The more refined one is, the more unhappy.

How unbearable at times are people who are happy, people for whom everything works out.

A fiance is neither this nor that: he's left one shore, but not yet reached the other.

The wealthy are always surrounded by hangers-on; science and art are as well.

It's easier to write about Socrates than about a young woman or a cook.

The thirst for powerful sensations takes the upper hand both over fear and over compassion for the grief of others.