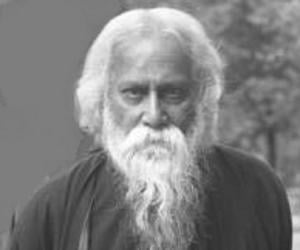 Rabindranath Tagore, who made India proud with his erudite literary accomplishments, has had a life full of emotional turmoil. But in spite of all that the Nobel laureate moved ahead in life giving us an inexhaustible literary treasure.

Tagore was a jovial person and the following incident proves it in the best way. He apparently participated in a teachers meeting and after the commencement of the event, he addressed one of the teachers present there named Nepal Babu. Tagore told Babu that he was becoming forgetful and therefore, the poet will give him ‘dand’. This statement put Nepal Babu in a state of utter confusion as he did not know what was his mistake for which Tagore said he will give ‘dand’ (a word which translates to punishment).

Just then Rabindranath Tagore brought out a stick and gave it to the perplexed teacher saying that this is the ‘dand’ (stick) Nepal Babu had forgotten at Tagore’s place. It was then that the people who witnessed the incident realized that the intellectual Tagore was just playing with homophones and this amused all.

He was also a determined person and a display of this vowed attitude made Mahatma Gandhi realize the truth of Tagore’s success.

Once Gandhi paid a visit to the poet and during that time Tagore’s well-wishers asked the freedom fighter to talk to the Nobel Laureate about his deteriorating health and ask him to take rest. The Mahatma decided to take action and told Tagore to take a little rest after lunch. Then Rabindranath revealed that when he was 12 years old, he promised himself not to take rest during day time and he has lived up to ever since. This was enough to make Gandhi understand how unwavering Tagore was.

Clouds come floating into my life, no longer to carry rain or usher storm, but to add color to my sunset sky.

Beauty is truth's smile when she beholds her own face in a perfect mirror.

Faith is the bird that feels the light when the dawn is still dark.

The butterfly counts not months but moments, and has time enough.

Trees are the earth's endless effort to speak to the listening heaven.

Let your life lightly dance on the edges of Time like dew on the tip of a leaf.

You can't cross the sea merely by standing and staring at the water.

Death is not extinguishing the light; it is only putting out the lamp because the dawn has come.

Every child comes with the message that God is not yet discouraged of man.

The highest education is that which does not merely give us information but makes our life in harmony with all existence.

By plucking her petals, you do not gather the beauty of the flower.

Love does not claim possession, but gives freedom.

Everything comes to us that belongs to us if we create the capacity to receive it.

Do not say, 'It is morning,' and dismiss it with a name of yesterday. See it for the first time as a newborn child that has no name.

Don't limit a child to your own learning, for he was born in another time.

Let us not pray to be sheltered from dangers but to be fearless when facing them.

Love is the only reality and it is not a mere sentiment. It is the ultimate truth that lies at the heart of creation.

What is Art? It is the response of man's creative soul to the call of the Real.

Depth of friendship does not depend on length of acquaintance.

We gain freedom when we have paid the full price.

Facts are many, but the truth is one.

The water in a vessel is sparkling; the water in the sea is dark. The small truth has words which are clear; the great truth has great silence.

Emancipation from the bondage of the soil is no freedom for the tree.

Gray hairs are signs of wisdom if you hold your tongue, speak and they are but hairs, as in the young.

The flower which is single need not envy the thorns that are numerous.

I have become my own version of an optimist. If I can't make it through one door, I'll go through another door - or I'll make a door. Something terrific will come no matter how dark the present.

Nirvana is not the blowing out of the candle. It is the extinguishing of the flame because day is come.

If you shut the door to all errors, truth will be shut out.

Every difficulty slurred over will be a ghost to disturb your repose later on.

The burden of the self is lightened with I laugh at myself.

We live in the world when we love it.

Love is an endless mystery, for it has nothing else to explain it.

Your idol is shattered in the dust to prove that God's dust is greater than your idol.

We come nearest to the great when we are great in humility.

Life is given to us, we earn it by giving it.

A mind all logic is like a knife all blade. It makes the hand bleed that uses it.

He who is too busy doing good finds no time to be good.

Love is not a mere impulse, it must contain truth, which is law.

Those who own much have much to fear.

Bigotry tries to keep truth safe in its hand with a grip that kills it.

In Art, man reveals himself and not his objects.

From the solemn gloom of the temple children run out to sit in the dust, God watches them play and forgets the priest.

To be outspoken is easy when you do not wait to speak the complete truth.

Trees are Earth's endless effort to speak to the listening heaven.