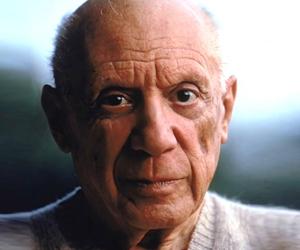 Spanish
Artists & Painters, Artists, Sculptors, Surrealist Artists, Cubist Painters
Spanish Cubist painter, Picasso was known to have shared a long-standing close association with Russian-French artist, Marc Zakharovich Chagall, until a rendezvous in 1964. Pablo was meeting Chagall for dinner, at the latter's residence in France. During the meeting, the Spanish genius asked his friend when the latter was planning to return to Russia. The host replied, "After you. I hear you are greatly loved there but not your work. You try to make it there and I'll wait and see how you do." What Chagall was referring to was the fact that Picasso had gained fame in Russia only because he was a Communist. For obvious reasons, the Russian artist's reply didn't go down too well with Picasso and a verbal tiff ensued between the two friends. Pablo said, "I guess with you it's a question of business. You won't go unless there's money in it." Though Chagall was supposedly grinning, he wasn't quite happy with the remark. Thus, this episode marked the end of the strong bond these two titans had shared for so many years. These men were apparently asked much later as to what they thought of each other's works. According to Picasso's lover, Fran'oise Gilot, the painter believed, "When Henri Matisse dies, Chagall will be the only painter left who understands what color really is. I'm not crazy about his roosters and asses and flying violinists, and all the folklore, but his canvases are really painted, not just thrown together. Some of the last things he's done in Vence (where Matisse painted his late frescos in the chapel) convince me that there's never been anybody since Renoir who has the feeling for light that Chagall has." Wondering what opinion the Russian virtuoso held? "What a genius, that Picasso. It's a pity he doesn't paint."

Everything you can imagine is real.

Every act of creation is first an act of destruction.

Action is the foundational key to all success.

Every child is an artist. The problem is how to remain an artist once we grow up.

The purpose of art is washing the dust of daily life off our souls.

The artist is a receptacle for emotions that come from all over the place: from the sky, from the earth, from a scrap of paper, from a passing shape, from a spider's web.

Every positive value has its price in negative terms... the genius of Einstein leads to Hiroshima.

Art is the lie that enables us to realize the truth.

Only put off until tomorrow what you are willing to die having left undone.

Our goals can only be reached through a vehicle of a plan, in which we must fervently believe, and upon which we must vigorously act. There is no other route to success.

I am always doing that which I cannot do, in order that I may learn how to do it.

All children are artists. The problem is how to remain an artist once he grows up.

Art washes away from the soul the dust of everyday life.

It takes a long time to become young.

Painting is just another way of keeping a diary.

I'd like to live as a poor man with lots of money.

Why do two colors, put one next to the other, sing? Can one really explain this? no. Just as one can never learn how to paint.

Art is not the application of a canon of beauty but what the instinct and the brain can conceive beyond any canon. When we love a woman we don't start measuring her limbs.

The chief enemy of creativity is 'good' sense.

I paint objects as I think them, not as I see them.

Youth has no age.

When I was a child, my mother said to me, 'If you become a soldier, you'll be a general. If you become a monk, you'll end up as the Pope.' Instead, I became a painter and wound up as Picasso.

Painting is a blind man's profession. He paints not what he sees, but what he feels, what he tells himself about what he has seen.

Sculpture is the art of the intelligence.

Who sees the human face correctly: the photographer, the mirror, or the painter?

Art is the elimination of the unnecessary.

There are only two types of women - goddesses and doormats.

Inspiration exists, but it has to find us working.

The world today doesn't make sense, so why should I paint pictures that do?

Are we to paint what's on the face, what's inside the face, or what's behind it?

Computers are useless. They can only give you answers.

Love is the greatest refreshment in life.

Give me a museum and I'll fill it.

There is no abstract art. You must always start with something. Afterward you can remove all traces of reality.

The older you get the stronger the wind gets - and it's always in your face.

We all know that Art is not truth. Art is a lie that makes us realize the truth, at least the truth that is given to us to understand.

I begin with an idea and then it becomes something else.

It is your work in life that is the ultimate seduction.

To finish a work? To finish a picture? What nonsense! To finish it means to be through with it, to kill it, to rid it of its soul, to give it its final blow the coup de grace for the painter as well as for the picture.

If only we could pull out our brain and use only our eyes.

When you start with a portrait and search for a pure form, a clear volume, through successive eliminations, you arrive inevitably at the egg. Likewise, starting with the egg and following the same process in reverse, one finishes with the portrait.

The genius of Einstein leads to Hiroshima.

Everything is a miracle. It is a miracle that one does not dissolve in one's bath like a lump of sugar.

God is really only another artist. He invented the giraffe, the elephant and the cat. He has no real style, He just goes on trying other things.

Sculpture is the best comment that a painter can make on painting.

To copy others is necessary, but to copy oneself is pathetic.

If there were only one truth, you couldn't paint a hundred canvases on the same theme.

The people who make art their business are mostly imposters.

Work is a necessity for man. Man invented the alarm clock.

To draw you must close your eyes and sing.

One does a whole painting for one peach and people think just the opposite - that particular peach is but a detail.

What is a face, really? Its own photo? Its make-up? Or is it a face as painted by such or such painter? That which is in front? Inside? Behind? And the rest? Doesn't everyone look at himself in his own particular way? Deformations simply do not exist.

If all the ways I have been along were marked on a map and joined up with a line, it might represent a minotaur.

One must act in painting as in life, directly.

An idea is a point of departure and no more. As soon as you elaborate it, it becomes transformed by thought.

What might be taken for a precocious genius is the genius of childhood. When the child grows up, it disappears without a trace. It may happen that this boy will become a real painter some day, or even a great painter. But then he will have to begin everything again, from zero.

Art is a lie that makes us realize truth.

When I die, it will be a shipwreck, and as when a huge ship sinks, many people all around will be sucked down with it.

They ought to put out the eyes of painters as they do goldfinches in order that they can sing better.

You mustn't always believe what I say. Questions tempt you to tell lies, particularly when there is no answer.

Disciples be damned. It's not interesting. It's only the masters that matter. Those who create.

I have a horror of people who speak about the beautiful. What is the beautiful? One must speak of problems in painting!

We must not discriminate between things. Where things are concerned there are no class distinctions. We must pick out what is good for us where we can find it.

Is there anything more dangerous than sympathetic understanding?

You have to have an idea of what you are going to do, but it should be a vague idea.