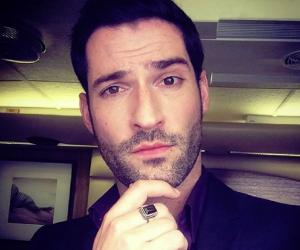 As an actor, I enjoy variety. That's a big thing for me. So, if I'm going to put my name to something and commit to something that's going to take up a lot of my time, it has to be something that I know is going to be enjoyable and worth my while. Otherwise, what's the point?

When I was eight or nine, I came to London for the day from Swindon and went to The National Gallery. I remember standing in Trafalgar Square with my best friend Tim, who was covered in pigeons because I put bird seed on his head.

What people like to comment on a lot is that I grew up in a religious family; my father is a pastor, and now I'm playing the devil. Thankfully, my family see the humorous side of the job.

You meet Rush at a certain point in his life where he's made a decision that he's going to not live by the moral code of being a doctor. He's decided to disengage with that side of his life for various reasons, which we find out through the first season.

I have a transient lifestyle. America is where I come to work, but my home is London. I like being bi-continental.

I couldn't afford to go to drama school in London. Then I met with the Royal Scottish Academy of Music and Drama in Glasgow, and I fell in love with the city. It was one of the few schools that offered me a place. It didn't do me any harm.

I come from a religious family - my father is a pastor, my uncle, my sister and her husband are a pastor team.

I turn to my wife for everything. Her success has never affected her as a person - she's incredibly loyal. We laugh together; we share everything, and she still surprises me. When I saw her in 'Sweet Charity,' I was so proud to say, 'That's my wife.'

Both my daughters are both so unimpressed when they see me on television. I want them to say, 'Oh, Dad!' But I say, 'Who's that?' and they say 'Dad' with no real interest, even if I'm wearing a long wig and riding on a horse! I think I'll have to read a 'CBeebies' bedtime story instead.

During the pilot, director Len Wiseman and I discussed how Lucifer views humanity, and we can came up with this notion that he sees them as lab rats.

For the show, it's really important that we remember that Lucifer is the Devil. It's important for Lucifer sometimes to remember that he's the Devil: to keep the notion that he is a wild animal that is seemingly being tamed but, at any moment, could snap.

My take on 'Lucifer' was pretty much laid down by Tom Kapinos when he wrote the original pilot script for it. I remember reading it for the first time, and I was about four or five pages in, thinking this is so funny, and I know how I would want to do this if I was going to do it.

I'm not a blokey bloke. I don't take myself too seriously. But that doesn't stop me being a bad person sometimes and doing things I regret. Such as having a child with someone you've split up with, then falling in love and wanting to spend the rest of your life with someone else. That's quite difficult.

Oysters are the devil's food. Not a fan!

It's an old joke: All evil people in movies are British.

My life changed in 2005 on the day I met my wife, Tamzin. She was in a play called 'Breathing Corpses' with James McAvoy, one of my best mates from drama school. I knew who she was, and I'd fancied her quite a bit when she played Melanie Owen in 'EastEnders.'

'Rush' was an interesting experience for me because I loved that show, and I loved playing that part, and most people I spoke to who watched it really enjoyed it.

My eldest daughter's been to a few sets of mine and gets spoiled when she's doing her nails, her hair. Though more often than not, you bring them to set, and they realize the filming process is pretty boring.

I walk in, and people go, 'Oh, look who it is! It's the devil! Speak of the devil!' It's fun. I'm having a lot of fun. I'm not going to lie. It's a little bit like being able to say anything you want to and getting away with it. 'Rush' was fun because he thought he was immortal, but this is more fun because Lucifer is immortal.

When you have hardcore fans of something like 'Miranda,' people can't see you any other way than Gary Preston, which is fair enough.

One of the biggest heroes and influences of mine, especially acting and working in comedy, is Steve Coogan.

This is going to sound so boring, but I play golf in Hertfordshire at a club called Sandy Lodge just by Moor Park Tube station. It's where I unwind and don't think about anything else.

You're always asking yourself, are you doing the best for your child? And other parents let you know if you're not, just not in a direct way. There's a sense of competition, which is ridiculous because you know deep down you're all suffering.

Lucifer has a sense of fun about life; he just likes to play with people. But the sense of humor of the show is what makes the show entertaining as opposed to dark.

The thing about Lucifer is that by the end of the first season, his world is falling apart a bit. Anyone that he could call an ally or trust, he now can't, and that leaves him in a place that he's never been before.

Every time I get in an Uber in L.A., they're like, 'Oh, great accent. Are you from Australia?' I constantly have to repeat myself when I'm in North America because no one understands a word I'm saying.

To be in a show like 'Miranda' that captures everyone's imagination is amazing, but it's hard when people can't see beyond that. I started travelling to North America because 'Miranda' was so popular in the U.K.; I always knew I wanted to challenge myself and not go for the obvious roles.

My mum was a music teacher. I've got three sisters, and we all played instruments when we were kids.

I'm in the Apple store on Regent Street far too much; I'm obsessed by whatever the latest Apple gadget is. For clothes, I love to shop in Liam Gallagher's shop Pretty Green on Carnaby Street, or Cult Clothing in Crouch End, for Original Penguin and G-Star.

Pilot season's such a strange time. You get such a concentrated amount of scripts. A lot of them become white noise after a while. When something really pops, it becomes apparent very quickly. I'm quite instinctive about that. I know, normally by about 10 pages in, whether I want to do something or not.

I've been acting for 15 years now, and the more you do, the more confidence you get about 'this is my career, and this is what I'm going to be doing.' Since I've started coming to the States, I've had a really great response. It's given me a lot of confidence to be more judicious about my own choices.

The weird thing about drama school is that you train for three years for one thing, and then, more often than not, it's something that you haven't trained for that you end up doing.

A lot of actors would tell you that they'd rather play the villain than the hero. When you're the character, there are no repercussions. So there is a kind of liberating feeling about saying certain things to certain people - and I think that it's always quite satisfying to do that.

I think about the movie 'Jaws.' They had this state-of-the-art animatronic shark, but it kept breaking down, which kept delaying the filming. So, they had to use it very sparingly, but it became why the film was so good because you never saw the shark. You only heard about it, and it was suggested.

What I really wanted to do was take this character and go beneath the veneer of Lucifer. Underneath it all, there was a guy who was a hurt soul and rejected from his father. How that played upon his choices was kind of interesting, but also it's going inside a shell of someone who doesn't know what an emotion is.

There's something really charming about a character that is fundamentally flawed and does some pretty despicable things, but yet you still kind of love him.

I've worked a lot in comedy. As much as I love playing dramatic roles, it's always nice to be able to have some humor around when working.

Lucifer likes to have fun, but we need to make sure that he's also rooted in a proper journey. For the first few episodes after a pilot, you're just trying to establish your world and the starting points for your characters. But I feel like, as the stakes went up, the 'Lucifer' veneer got less and less.

I had been quite judicious about the scripts I was reading, but nothing was really taking my fancy until I pulled this script out: 'Lucifer.' I have to say, within about three or four pages, I thought it was hilarious; I laughed out loud a couple of times and knew this is the one that I wanted to do.

The nice thing about 'Miranda' especially is that the audience that we had was school kids right through to pensioners. It seems to be a show that people watch as a family, so it was the first job I've been involved in that certainly my oldest daughter and my middle daughter are big fans of, and proud that I'm in it, which is a nice feeling.

In terms of, like, getting into a mindset, I use music all the time when I'm working.

I grew up on the very human side of Christianity, so messages in the household I grew up in were about peace, love, and being understanding of everybody, which I think is quite cool.

The last TV show I really indulged in was 'Breaking Bad,' and I was in such a state of mourning when it ended. I've got to choose my next one carefully.

I think I've started to dream in American a little bit.