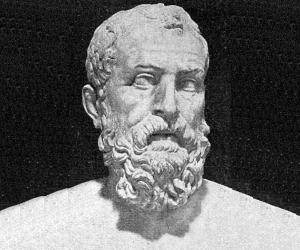 Most people would have heard the term, "platonic love", which simply put means 'non-sexual love'. It wasn't really a term coined by the Greek philosopher Plato. In fact, it was this thinker's masterpiece 'Symposium' that inspired Marsilio Ficino, an Italian scholar to come up with the jargon, "amor platonicus". 'Symposium' shows Plato's teacher Socrates describe the transcendence of a mere basal feeling such as desire for a beautiful body to the love of beauty in general.

Ficino, also a Catholic priest, took Socrates' definition of love a notch higher by relating it to devotion towards God. He equated this love with divine attachment, saying, "The passion of a lover is not quenched by the mere touch or sight of a body, for it does not desire this or that body, but desires the splendor of the divine light shining through bodies, and is amazed and awed by it."

Subsequently the locution "amor platonicus" became a fad and women proudly began donning the role of 'the beloved who incites spiritual desire'. The same expression was adopted into written English not before the 1630s, when Neoplatonism became the new trend. While some swore heavily by the phraseology, others endeavored to expose it as pretentious. William Davenant, for instance, wrote a play, 'Platonick Love' which approached the entire concept as if it was ostentatious. Well, hate it or like it, we just can't ignore ‘platonic love’, and it's all because of Plato.

The beginning is the most important part of the work.

He who is not a good servant will not be a good master.

Music is a moral law. It gives soul to the universe, wings to the mind, flight to the imagination, and charm and gaiety to life and to everything.

Thinking: the talking of the soul with itself.

One of the penalties for refusing to participate in politics is that you end up being governed by your inferiors.

If a man neglects education, he walks lame to the end of his life.

Courage is knowing what not to fear.

To prefer evil to good is not in human nature; and when a man is compelled to choose one of two evils, no one will choose the greater when he might have the less.

There are three classes of men; lovers of wisdom, lovers of honor, and lovers of gain.

Dictatorship naturally arises out of democracy, and the most aggravated form of tyranny and slavery out of the most extreme liberty.

The first and greatest victory is to conquer yourself; to be conquered by yourself is of all things most shameful and vile.

At the touch of love everyone becomes a poet.

Science is nothing but perception.

Good people do not need laws to tell them to act responsibly, while bad people will find a way around the laws.

The learning and knowledge that we have, is, at the most, but little compared with that of which we are ignorant.

All men are by nature equal, made all of the same earth by one Workman; and however we deceive ourselves, as dear unto God is the poor peasant as the mighty prince.

Apply yourself both now and in the next life. Without effort, you cannot be prosperous. Though the land be good, You cannot have an abundant crop without cultivation.

There will be no end to the troubles of states, or of humanity itself, till philosophers become kings in this world, or till those we now call kings and rulers really and truly become philosophers, and political power and philosophy thus come into the same hands.

To love rightly is to love what is orderly and beautiful in an educated and disciplined way.

Love is a serious mental disease.

Knowledge which is acquired under compulsion obtains no hold on the mind.

The measure of a man is what he does with power.

When the mind is thinking it is talking to itself.

For a man to conquer himself is the first and noblest of all victories.

Death is not the worst that can happen to men.

No evil can happen to a good man, either in life or after death.

A good decision is based on knowledge and not on numbers.

Every heart sings a song, incomplete, until another heart whispers back. Those who wish to sing always find a song. At the touch of a lover, everyone becomes a poet.

Ignorance, the root and stem of all evil.

When the tyrant has disposed of foreign enemies by conquest or treaty, and there is nothing more to fear from them, then he is always stirring up some war or other, in order that the people may require a leader.

The greatest wealth is to live content with little.

People are like dirt. They can either nourish you and help you grow as a person or they can stunt your growth and make you wilt and die.

Justice in the life and conduct of the State is possible only as first it resides in the hearts and souls of the citizens.

Knowledge without justice ought to be called cunning rather than wisdom.

This City is what it is because our citizens are what they are.

Opinion is the medium between knowledge and ignorance.

When men speak ill of thee, live so as nobody may believe them.

When there is an income tax, the just man will pay more and the unjust less on the same amount of income.

We are twice armed if we fight with faith.

No law or ordinance is mightier than understanding.

Nothing can be more absurd than the practice that prevails in our country of men and women not following the same pursuits with all their strengths and with one mind, for thus, the state instead of being whole is reduced to half.

Man - a being in search of meaning.

Astronomy compels the soul to look upwards and leads us from this world to another.

The man who makes everything that leads to happiness depends upon himself, and not upon other men, has adopted the very best plan for living happily. This is the man of moderation, the man of manly character and of wisdom.

Let parents bequeath to their children not riches, but the spirit of reverence.

They certainly give very strange names to diseases.

Nothing in the affairs of men is worthy of great anxiety.

The direction in which education starts a man will determine his future in life.

He who is of calm and happy nature will hardly feel the pressure of age, but to him who is of an opposite disposition youth and age are equally a burden.

Love is the joy of the good, the wonder of the wise, the amazement of the Gods.

He who commits injustice is ever made more wretched than he who suffers it.

Poetry is nearer to vital truth than history.

Music is the movement of sound to reach the soul for the education of its virtue.

Courage is a kind of salvation.

To be sure I must; and therefore I may assume that your silence gives consent.

This and no other is the root from which a tyrant springs; when he first appears he is a protector.

Wonder is the feeling of the philosopher, and philosophy begins in wonder.

Justice means minding one's own business and not meddling with other men's concerns.

The god of love lives in a state of need. It is a need. It is an urge. It is a homeostatic imbalance. Like hunger and thirst, it's almost impossible to stamp out.

Rhetoric is the art of ruling the minds of men.

The curse of me and my nation is that we always think things can be bettered by immediate action of some sort, any sort rather than no sort.

The most virtuous are those who content themselves with being virtuous without seeking to appear so.

How can you prove whether at this moment we are sleeping, and all our thoughts are a dream; or whether we are awake, and talking to one another in the waking state?

The most important part of education is proper training in the nursery.

Honesty is for the most part less profitable than dishonesty.

Necessity... the mother of invention.

All the gold which is under or upon the earth is not enough to give in exchange for virtue.

Better a little which is well done, than a great deal imperfectly.

It is right to give every man his due.

Tyranny naturally arises out of democracy.

I never did anything worth doing by accident, nor did any of my inventions come by accident; they came by work.

Ignorance of all things is an evil neither terrible nor excessive, nor yet the greatest of all; but great cleverness and much learning, if they be accompanied by a bad training, are a much greater misfortune.

No man should bring children into the world who is unwilling to persevere to the end in their nature and education.

Cunning... is but the low mimic of wisdom.

Knowledge becomes evil if the aim be not virtuous.

There is no harm in repeating a good thing.

The eyes of the soul of the multitudes are unable to endure the vision of the divine.

We do not learn; and what we call learning is only a process of recollection.

Excess generally causes reaction, and produces a change in the opposite direction, whether it be in the seasons, or in individuals, or in governments.

The excessive increase of anything causes a reaction in the opposite direction.

The good is the beautiful.

Any man may easily do harm, but not every man can do good to another.

There's a victory, and defeat; the first and best of victories, the lowest and worst of defeats which each man gains or sustains at the hands not of another, but of himself.

If particulars are to have meaning, there must be universals.

The blame is his who chooses: God is blameless.

To suffer the penalty of too much haste, which is too little speed.