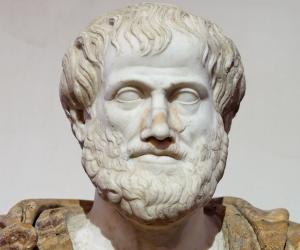 Platonic Academy (367 BC â€“ 347 BC)
Philosophers, Intellectuals & Academics
Known as one of the greatest philosophers the world has known, Aristotle's knowledge was not marginalized to a specific subject. He penned theories on a vast range of topics like Anatomy, Biology, Geology, Physics and Zoology. Most of us might be aware of his beliefs, but there are perhaps only a few who are aware that he was the teacher of Alexander the Great, a renowned monarch. The famous emperor sought advice from his teacher Aristotle on every matter of importance, be it on the professional front like warfare or even personal, like his dietary regime. The book "Secretum Secretorum" (The Secret of Secrets), which Aristotle had penned was a compilation of letters exchanged between the philosopher and Alexander, which encompassed issues such as astrology, medicine, alchemy, ethics and statecraft. In one of the letters, the king apparently told Aristotle that he realized Persian men have the potential to rule a kingdom and hence, he is determined to kill them. However, before getting into action the monarch thought of seeking the advice of his tutor Aristotle. In his reply, this great philosopher asked Alexander not to proceed with his plans as killing Persian men is not the solution. Rather he advised him to win the hearts of his subjects by being kind to them. This advice worked wonders for the king and today we know him as "Alexander the Great", the one who conquered over the world and an iconic man in world history. He may not be physically present amongst us, but his beliefs will remain immortal and we can seek guidance from his quotes.

Well begun is half done.

Anybody can become angry - that is easy, but to be angry with the right person and to the right degree and at the right time and for the right purpose, and in the right way - that is not within everybody's power and is not easy.

It is during our darkest moments that we must focus to see the light.

Courage is the first of human qualities because it is the quality which guarantees the others.

You will never do anything in this world without courage. It is the greatest quality of the mind next to honor.

It is the mark of an educated mind to be able to entertain a thought without accepting it.

Happiness depends upon ourselves.

Quality is not an act, it is a habit.

The roots of education are bitter, but the fruit is sweet.

Love is composed of a single soul inhabiting two bodies.

To run away from trouble is a form of cowardice and, while it is true that the suicide braves death, he does it not for some noble object but to escape some ill.

In all things of nature there is something of the marvelous.

The aim of art is to represent not the outward appearance of things, but their inward significance.

He who is unable to live in society, or who has no need because he is sufficient for himself, must be either a beast or a god.

The end of labor is to gain leisure.

Those that know, do. Those that understand, teach.

The aim of the wise is not to secure pleasure, but to avoid pain.

The energy of the mind is the essence of life.

Whosoever is delighted in solitude is either a wild beast or a god.

Wishing to be friends is quick work, but friendship is a slow ripening fruit.

Pleasure in the job puts perfection in the work.

There is no great genius without some touch of madness.

Education is an ornament in prosperity and a refuge in adversity.

The worst form of inequality is to try to make unequal things equal.

The law is reason, free from passion.

The duty of rhetoric is to deal with such matters as we deliberate upon without arts or systems to guide us, in the hearing of persons who cannot take in at a glance a complicated argument or follow a long chain of reasoning.

We make war that we may live in peace.

Good habits formed at youth make all the difference.

At his best, man is the noblest of all animals; separated from law and justice he is the worst.

The wise man does not expose himself needlessly to danger, since there are few things for which he cares sufficiently; but he is willing, in great crises, to give even his life - knowing that under certain conditions it is not worthwhile to live.

I count him braver who overcomes his desires than him who conquers his enemies; for the hardest victory is over self.

Hope is a waking dream.

Personal beauty is a greater recommendation than any letter of reference.

Dignity does not consist in possessing honors, but in deserving them.

Democracy is when the indigent, and not the men of property, are the rulers.

The whole is more than the sum of its parts.

The one exclusive sign of thorough knowledge is the power of teaching.

If liberty and equality, as is thought by some, are chiefly to be found in democracy, they will be best attained when all persons alike share in government to the utmost.

The educated differ from the uneducated as much as the living from the dead.

Fear is pain arising from the anticipation of evil.

Education is the best provision for old age.

In a democracy the poor will have more power than the rich, because there are more of them, and the will of the majority is supreme.

All human actions have one or more of these seven causes: chance, nature, compulsions, habit, reason, passion, desire.

The ideal man bears the accidents of life with dignity and grace, making the best of circumstances.

Those who educate children well are more to be honored than they who produce them; for these only gave them life, those the art of living well.

No one would choose a friendless existence on condition of having all the other things in the world.

It is just that we should be grateful, not only to those with whose views we may agree, but also to those who have expressed more superficial views; for these also contributed something, by developing before us the powers of thought.

Without friends no one would choose to live, though he had all other goods.

He who hath many friends hath none.

The least initial deviation from the truth is multiplied later a thousandfold.

Democracy arises out of the notion that those who are equal in any respect are equal in all respects; because men are equally free, they claim to be absolutely equal.

The ultimate value of life depends upon awareness and the power of contemplation rather than upon mere survival.

Change in all things is sweet.

Jealousy is both reasonable and belongs to reasonable men, while envy is base and belongs to the base, for the one makes himself get good things by jealousy, while the other does not allow his neighbour to have them through envy.

Moral excellence comes about as a result of habit. We become just by doing just acts, temperate by doing temperate acts, brave by doing brave acts.

No notice is taken of a little evil, but when it increases it strikes the eye.

The gods too are fond of a joke.

A tyrant must put on the appearance of uncommon devotion to religion. Subjects are less apprehensive of illegal treatment from a ruler whom they consider god-fearing and pious. On the other hand, they do less easily move against him, believing that he has the gods on his side.

Mothers are fonder than fathers of their children because they are more certain they are their own.

The secret to humor is surprise.

It is unbecoming for young men to utter maxims.

The most perfect political community is one in which the middle class is in control, and outnumbers both of the other classes.

Suffering becomes beautiful when anyone bears great calamities with cheerfulness, not through insensibility but through greatness of mind.

Politicians also have no leisure, because they are always aiming at something beyond political life itself, power and glory, or happiness.

Youth is easily deceived because it is quick to hope.

All paid jobs absorb and degrade the mind.

I have gained this from philosophy: that I do without being commanded what others do only from fear of the law.

Poetry is finer and more philosophical than history; for poetry expresses the universal, and history only the particular.

Bring your desires down to your present means. Increase them only when your increased means permit.

My best friend is the man who in wishing me well wishes it for my sake.

No excellent soul is exempt from a mixture of madness.

Plato is dear to me, but dearer still is truth.

Persuasion is achieved by the speaker's personal character when the speech is so spoken as to make us think him credible. We believe good men more fully and more readily than others: this is true generally whatever the question is, and absolutely true where exact certainty is impossible and opinions are divided.

Man is by nature a political animal.

If one way be better than another, that you may be sure is nature's way.

Some animals are cunning and evil-disposed, as the fox; others, as the dog, are fierce, friendly, and fawning. Some are gentle and easily tamed, as the elephant; some are susceptible of shame, and watchful, as the goose. Some are jealous and fond of ornament, as the peacock.

Character may almost be called the most effective means of persuasion.

Even when laws have been written down, they ought not always to remain unaltered.

The virtue of justice consists in moderation, as regulated by wisdom.

A great city is not to be confounded with a populous one.

What the statesman is most anxious to produce is a certain moral character in his fellow citizens, namely a disposition to virtue and the performance of virtuous actions.

All men by nature desire knowledge.

The soul never thinks without a picture.

There was never a genius without a tincture of madness.

Every art and every inquiry, and similarly every action and choice, is thought to aim at some good; and for this reason the good has rightly been declared to be that at which all things aim.

Rhetoric may be defined as the faculty of observing in any given case the available means of persuasion. This is not a function of any other art.

Bashfulness is an ornament to youth, but a reproach to old age.

Men are swayed more by fear than by reverence.

Courage is a mean with regard to fear and confidence.

In poverty and other misfortunes of life, true friends are a sure refuge. The young they keep out of mischief; to the old they are a comfort and aid in their weakness, and those in the prime of life they incite to noble deeds.