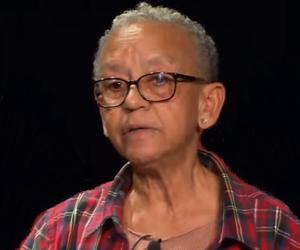 Nikki Giovanni, the 72-year-old African-American writer who is an ardent fan of the Harry Potter books, once revealed during an interview what inspires her to pen down her thoughts. This peerless educator insists on blending music with poetry, simply because like “strawberries and cream—they go together”. She claimed that of all her poems, ‘Ego-Tripping’ was the most challenging as well as the most popular. When asked why she wrote it, Giovanni admits it was because she wanted it to be a gift for girls all across the globe. She wanted young women of our generation to realize that they are nothing short of the men, despite all prejudices and gender bias displayed through eons. However, the poem proved to be more rewarding than she had expected when she saw how much even boys loved reading it.

Another creation that gave Nikki her fame, was ‘All Eyes on You’, dedicated to the late rap artist Tupac Shakur. Why did she do so? To grieve the death of a man who played a significant role in the evolution of “the art community, the black community, and the American community”. This revered poet, who is also a sought-after human rights activist, insists that her work, ‘The Funeral of Martin Luther King, Jr.’ (unlike ‘All Eyes on You’) was more of a political poem rather than a eulogy.

The third poem that is close to her heart is ‘Cotton Candy on a Rainy Day’, which was written for those who had grown up the old-fashioned way; those who knew the value of things that could not be preserved, just like life itself.

A lot of people resist transition and therefore never allow themselves to enjoy who they are. Embrace the change, no matter what it is; once you do, you can learn about the new world you're in and take advantage of it.

Everything will change. The only question is growing up or decaying.

Mistakes are a fact of life. It is the response to the error that counts.

I really don't think life is about the I-could-have-beens. Life is only about the I-tried-to-do. I don't mind the failure but I can't imagine that I'd forgive myself if I didn't try.

If now isn't a good time for the truth I don't see when we'll get to it.

There're two people in the world that are not likeable: a master and a slave.

We love because it's the only true adventure.

Art is not for the cultivated taste. It is to cultivate taste.

Follow your image as far as you can no matter how useless you think it is. Push yourself.

If I could come back as anything - I'd be a bird, first, but definitely the command key is my second choice.

We write because we believe the human spirit cannot be tamed and should not be trained.

Now, everything I do, I do because I want to. And I believe the best is yet to come.

There are things you stand up for because it's right.

Poetry and music are very good friends. Like mommies and daddies and strawberries and cream - they go together.

For most of my life, I've thought of myself as pretty cool.

I spend a lot of time learning about bird watching.

If you know what you're talking about, or if you feel that you do, the reader will believe you.

If everybody became a poet the world would be much better. We would all read to each other.

We believe 'Peter Rabbit' because Beatrix Potter believes it. You have to.

I think one of the nicest things that we created as a generation was just the fact that we could say, 'Hey, I don't like white people.'

You must invent your own games and teach us old ones how to play.

The poet Melvin B. Tolson once said, 'A civilization is judged only in its decline.' That made sense to me. I would imagine the same is true for poets and tennis players.

When you are skinning your customers, you should leave some skin on to grow again so that you can skin them again.

Hip-hop is a cultural expression - it's embracing.

I am proud of the hip hop generation. They are good business people and, actually, good people.

The catchword I use with my classes is: The authority of the writer always overcomes the skepticism of the reader.

Favorite poems are like favorite children. We definitely have them but we never tell as the others would have their feelings hurt.

We eat up artists like there's going to be a famine at the end.

I appreciate and enjoy my age.

I am totally fascinated by people and our history as I understand and continue to explore it. People have so much to give and so far to go and yet we have given and gone a great distance. It's really just interesting to ask: why not? And see where that takes me.