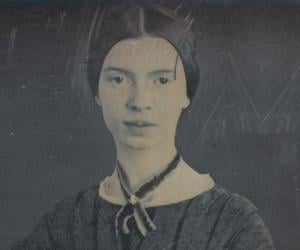 Undoubtedly one of America's favorite poets, Emily Dickinson was quite a recluse and maybe that is the reason behind a lot of speculations surrounding her life. For instance, several scholars have assumed that this lone wolf could have harbored homosexual sentiments for her sister-in-law named Susan. Though it is nothing but a presumption, certain letters written to Susan Huntington Dickinson are so intimate, that they were dubbed ‘amorous’. In one such letter, Dickinson had written, "Susan knows / she is a Siren -- / and that at a / word from her, / Emily would / forfeit Righteousness -- " It was this lady (who was also a writer) that the talented poet wrote the most number of letters to, and Susan considered Emily her true critic. According to professor Martha Nell Smith of the ‘University of Maryland’, "Although their relationship has strong elements of romantic friendship and also might be called prototypically lesbian, as well as mutually mentoring, their dynamic devotion does not fit comfortably into any standard category -- lover or sister or mentor or best friend or neighbor or companion -- though it has elements of each". Considering that Emily Dickenson lived during the 19th century, a time when homosexuality was not accepted, it comes as no surprise that the remarkable writer had no direct contact with anyone else apart from her dog, Carlo.

The soul should always stand ajar, ready to welcome the ecstatic experience.

Forever is composed of nows.

Hope is the thing with feathers that perches in the soul - and sings the tunes without the words - and never stops at all.

Saying nothing... sometimes says the most.

They might not need me; but they might. I'll let my head be just in sight; a smile as small as mine might be precisely their necessity.

Unable are the loved to die, for love is immortality.

A word is dead when it is said, some say. I say it just begins to live that day.

How strange that nature does not knock, and yet does not intrude!

Find ecstasy in life; the mere sense of living is joy enough.

I dwell in possibility.

If I read a book and it makes my whole body so cold no fire can ever warm me, I know that is poetry.

If I can stop one heart from breaking, I shall not live in vain.

Not knowing when the dawn will come I open every door.

If I feel physically as if the top of my head were taken off, I know that is poetry.

Beauty is not caused. It is.

Luck is not chance, it's toil; fortune's expensive smile is earned.

Behavior is what a man does, not what he thinks, feels, or believes.

Morning without you is a dwindled dawn.

Dogs are better than human beings because they know but do not tell.

Success is counted sweetest by those who never succeed.

My friends are my estate.

Love is anterior to life, posterior to death, initial of creation, and the exponent of breath.

That it will never come again is what makes life sweet.

Because I could not stop for death, He kindly stopped for me; The carriage held but just ourselves and immortality.

To live is so startling it leaves little time for anything else.

Fame is a fickle food upon a shifting plate.

Sisters are brittle things. God was penurious with me, which makes me shrewd with Him. One is a dainty sum! One bird, one cage, one flight; one song in those far woods, as yet suspected by faith only!

Dying is a wild night and a new road.

The brain is wider than the sky.

It is better to be the hammer than the anvil.

I hope you love birds too. It is economical. It saves going to heaven.

Old age comes on suddenly, and not gradually as is thought.

To make a prairie it takes a clover and one bee, One clover, and a bee, And revery. The revery alone will do, If bees are few.

I argue thee that love is life. And life hath immortality.

Finite to fail, but infinite to venture.

Whenever a thing is done for the first time, it releases a little demon.

Truth is so rare that it is delightful to tell it.

Where thou art, that is home.

I had no portrait, now, but am small, like the wren; and my hair is bold, like the chestnut bur; and my eyes, like the sherry in the glass, that the guest leaves.

I'm nobody, who are you?

They say that God is everywhere, and yet we always think of Him as somewhat of a recluse.

If fame belonged to me, I could not escape her; if she did not, the longest day would pass me on the chase, and the approbation of my dog would forsake me then. My barefoot rank is better.

There is no Frigate like a book to take us lands away nor any coursers like a page of prancing Poetry.

After great pain, a formal feeling comes. The Nerves sit ceremonious, like tombs.

Parting is all we know of heaven, and all we need of hell.

I am growing handsome very fast indeed! I expect I shall be the belle of Amherst when I reach my 17th year. I don't doubt that I shall have perfect crowds of admirers at that age. Then how I shall delight to make them await my bidding, and with what delight shall I witness their suspense while I make my final decision.

A wounded deer leaps the highest.

I never had a mother. I suppose a mother is one to whom you hurry when you are troubled.

We were never intimate mother and children while she was our mother - but... when she became our child, the affection came.

In such a porcelain life, one likes to be sure that all is well lest one stumble upon one's hopes in a pile of broken crockery.

Nature is our eldest mother; she will do no harm.

He ate and drank the precious Words, his Spirit grew robust; He knew no more that he was poor, nor that his frame was Dust.

To love is so startling it leaves little time for anything else.

Tell the truth, but tell it slant.

I have a brother and sister; my mother does not care for thought, and father, too busy with his briefs to notice what we do. He buys me many books, but begs me not to read them, because he fears they joggle the mind.

Celebrity is the chastisement of merit and the punishment of talent.