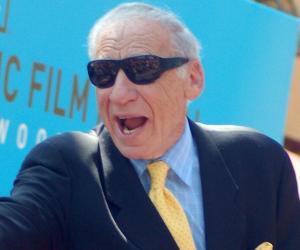 Mel Brooks the ace comedian was once at the verge of plummeting to ground from the window of a multi-storied hotel's suite. It was during the time he was working with Sid Caesar the creator of comedy show, 'Your Show of Shows'. The duo were in Chicago and were in Caesar's hotel suite room, sharing drinks and introspecting their recent performance. Sid was not happy about how some of the jokes fared and since Mel was the writer he was stuck re-writing them.

They got the two of them right but could not wrap their head around the third one. They were up till three in the night and Sid would smoke cigar after cigar. Mel who was by then suffocated with the smoke got up and said, “Sid, I need air, I can’t breathe.” Hearing this Caesar stood up as if he were a man possessed and grabbed Mel by the seat of his pants and carried him all the way to the window and left him dangling. Mel was staring at the melee of taxis rushing by the road below still unable to comprehend things. Sid yelled “Do you have enough air? Are you happy?!” And Mel shouted back, “Oh, yeah, plenty, plenty!” Hearing this he hauls Brook back in and the two complete the remaining work. Mel reminiscences that since the fateful day he never complained again.

Look, I don't want to wax philosophic, but I will say that if you're alive you've got to flap your arms and legs, you've got to jump around a lot, for life is the very opposite of death, and therefore you must at very least think noisy and colorfully, or you're not alive.

Everything we do in life is based on fear, especially love.

Tragedy is when I cut my finger. Comedy is when you fall into an open sewer and die.

Humor is just another defense against the universe.

A lot of music is mathematics. It's balance.

As long as the world is turning and spinning, we're gonna be dizzy and we're gonna make mistakes.

If God wanted us to fly, He would have given us tickets.

Bad taste is simply saying the truth before it should be said.

It's talent. Either you got it or you ain't.

If you're quiet, you're not living. You've got to be noisy and colorful and lively.

Life literally abounds in comedy if you just look around you.

A cinema villain essentially needs a moustache so he can twiddle with it gleefully as he cooks up his next nasty plan.

We want to get people laughing; we don't want to offend anybody.

When you come to Germany as a Jew you have an uneasy feeling, but I've always felt okay in Berlin.

You got to be brave. If you feel something, you've really got to risk it.

I'm still a horse that can run. I may not be able to win the Derby, but what do you do when you retire? People retire and they vegetate. They go away and they dry up.

If you stand on a soapbox and trade rhetoric with a dictator you never win.

If Shaw and Einstein couldn't beat death, what chance have I got? Practically none.

Rhetoric does not get you anywhere, because Hitler and Mussolini are just as good at rhetoric. But if you can bring these people down with comedy, they stand no chance.

I only direct in self-defense.

A brushstroke of vanity is good to add into the mix, to balance your timidity. We're all blessed with a lot of timidity and a lot of worry and anxiety, and vanity is a good antidote.

The brilliance of Max Brooks is that he always quotes authorities at the back of his books that never existed. Like a Russian professor he made up that validates a story or character.

Immortality is a by-product of good work.

'Mad About You' was very fun.

I was in the army, and to me it was like a newsreel.

I'm rather secular. I'm basically Jewish. But I think I'm Jewish not because of the Jewish religion at all.

He who hesitates is poor.

I was a soldier in WWII. The last couple of months of the war I was actually in combat.

There's an army story in me, and I think there's a WWII Brooks film somewhere.

Well, you know, 'Spaceballs' is a weird combination, because it's a simple, sweet little fairytale, and it's crazy and out-there and making fun of and taking apart sci-fi, 'Star Wars', and 'Star Trek'.

Everything starts with writing. And then to support your vision, your ideas, your philosophy, your jokes, whatever, you've gotta perform them and/or direct them, or sometimes just produce them.

Anybody can direct, but there are only eleven good writers.

I'll accept bad taste in a minute, as long as there's some great comedy minds and performances.

These men both publicly and privately have done so much for me. Without Nathan Lane and Matthew Broderick I would be living in a little motel just around the corner here, trying to make ends meet.

Every human being has hundreds of separate people living under his skin. The talent of a writer is his ability to give them their separate names, identities, personalities and have them relate to other characters living with him.

But I have bad taste with a deep fount of intellectuality.

I wish I was better looking.

My job is to go out and entertain the most people possible.

I loved Westerns as a little kid, and I loved horror films.

Judd Apatow is pretty good, both as a producer and as a director.

As far as songwriters, I've always been a fan of Irving Berlin, Cole Porter, and George Gershwin; those guys mean a lot to me.

You're always a little disappointing in person because you can't be the edited essence of yourself.

No, no, the songs write themselves, almost.

Dom DeLuise was a big man in every way. He was big in size and created big laughter and joy.

I don't believe in this business of being behind, better to be in front.

I know how to make it a great musical. I've got to. It's like I've got to see it on stage.

All short women have a delayed fuse. Marry a taller woman: My wife was an inch or two taller than me; it's a sign of security.

We rest our case on the production numbers.