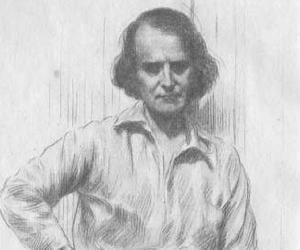 Elbert Hubbard married young, but after a few years of marriage, he met a woman named Alice and fell in love with her. This extramarital relationship led to the end of his marriage with his first wife. Alice (who the famous American writer considered his soul mate) and Elbert got wedded and had a daughter together, eventually. Together the writer couple pioneered the Roycroft movement until the World War I began.

Once the decisive war started, Elbert and Alice decided to go to Europe and report on the conflict. The duo also hoped that they could make a difference and encourage the warring nations to come to a peace agreement. To attempt this brave initiative, the Hubbards boarded the ship, Lusitania, which would take them to England, despite the warning announcements made by the Germans.

The ship was doomed needless to say and was bombed by a German submarine on May 7, 1915. The ship sank, but one of the survivors, named Ernest Cooper narrated a significant incident in a letter written to Bert, the author’s son.  He said he saw the loving couple standing at the deck arm in arm, unruffled, at the crucial moment when the ship was drowning fast and lifeboats were far and few in between. While scurrying for safety Cooper asked Hubbard what he planned to do. Elbert shook his head while Alice said, “There does not seem anything to do”. Almost immediately the two lovebirds went into a room and shut the door, taking the decision to sacrifice their lives together, rather than drifting apart in the water.

Never explain - your friends do not need it and your enemies will not believe you anyway.

Positive anything is better than negative nothing.

A friend is one who knows you and loves you just the same.

The greatest mistake you can make in life is continually fearing that you'll make one.

Know what you want to do, hold the thought firmly, and do every day what should be done, and every sunset will see you that much nearer to your goal.

Do not take life too seriously. You will never get out of it alive.

Do your work with your whole heart, and you will succeed - there's so little competition.

Character is the result of two things: mental attitude and the way we spend our time.

A little more persistence, a little more effort, and what seemed hopeless failure may turn to glorious success.

The object of teaching a child is to enable him to get along without his teacher.

We are punished by our sins, not for them.

Be pleasant until ten o'clock in the morning and the rest of the day will take care of itself.

The love we give away is the only love we keep.

There is no failure except in no longer trying.

Responsibility is the price of freedom.

Love grows by giving. The love we give away is the only love we keep. The only way to retain love is to give it away.

The final proof of greatness lies in being able to endure criticism without resentment.

The sculptor produces the beautiful statue by chipping away such parts of the marble block as are not needed - it is a process of elimination.

To avoid criticism, do nothing, say nothing, and be nothing.

We are not punished for our sins, but by them.

God will not look you over for medals degrees or diplomas, but for scars.

We work to become, not to acquire.

The world is moving so fast these days that the man who says it can't be done is generally interrupted by someone doing it.

Many a man's reputation would not know his character if they met on the street.

The recipe for perpetual ignorance is: Be satisfied with your opinions and content with your knowledge.

Initiative is doing the right things without being told.

We awaken in others the same attitude of mind we hold toward them.

If you suffer, thank God! It is a sure sign that you are alive.

Genius may have its limitations, but stupidity is not thus handicapped.

Life is just one damned thing after another.

Pray that success will not come any faster than you are able to endure it.

He has achieved success who has worked well, laughed often, and loved much.

Our desires always disappoint us; for though we meet with something that gives us satisfaction, yet it never thoroughly answers our expectation.

Reversing your treatment of the man you have wronged is better than asking his forgiveness.

The ineffable joy of forgiving and being forgiven forms an ecstasy that might well arouse the envy of the gods.

The only foes that threaten America are the enemies at home, and these are ignorance, superstition and incompetence.

Love, we say, is life; but love without hope and faith is agonizing death.

In order to have friends, you must first be one.

A man is not paid for having a head and hands, but for using them.

Optimism is a kind of heart stimulant - the digitalis of failure.

The happiness of this life depends less on what befalls you than the way in which you take it.

The supernatural is the natural not yet understood.

A failure is a man who has blundered, but is not able to cash in the experience.

Every tyrant who has lived has believed in freedom for himself.

Secrets are things we give to others to keep for us.

If you can't answer a man's arguments, all is not lost; you can still call him vile names.

Never get married in college; it's hard to get a start if a prospective employer finds you've already made one mistake.

Live truth instead of professing it.

Life in abundance comes only through great love.

A retentive memory may be a good thing, but the ability to forget is the true token of greatness.

A man is as good as he has to be, and a woman as bad as she dares.

The man who has no problems is out of the game.

It's pretty hard to be efficient without being obnoxious.

It may happen sometimes that a long debate becomes the cause of a longer friendship. Commonly, those who dispute with one another at last agree.

An idea that is not dangerous is not worthy of being called an idea at all.

The highest reward that God gives us for good work is the ability to do better work.

It is easy to get everything you want, provided you first learn to do without the things you cannot get.

Little minds are interested in the extraordinary; great minds in the commonplace.

No one ever gets far unless he accomplishes the impossible at least once a day.

Editor: a person employed by a newspaper, whose business it is to separate the wheat from the chaff, and to see that the chaff is printed.

A conservative is a man who is too cowardly to fight and too fat to run.

There is something that is much more scarce, something finer far, something rarer than ability. It is the ability to recognize ability.

If pleasures are greatest in anticipation, just remember that this is also true of trouble.

A woman will doubt everything you say except it be compliments to herself.

A pessimist? That's a person who has been intimately acquainted with an optimist.

Polygamy: An endeavour to get more out of life than there is in it.

Often we can help each other most by leaving each other alone; at other times we need the hand-grasp and the word of cheer.

The man who knows it can't be done counts the risk, not the reward.

Fear is the thought of admitted inferiority.

The reason men oppose progress is not that they hate progress, but that they love inertia.

This will never be a civilized country until we spend more money for books than we do for chewing gum.

The church saves sinners, but science seeks to stop their manufacture.

The idea that is not dangerous is not worthy of being called an idea at all.

Friendship, like credit, is highest when it is not used.

Where much is expected from an individual, he may rise to the level of events and make the dream come true.

Men are only as great as they are kind.

The thing we fear we bring to pass.

So long as governments set the example of killing their enemies, private individuals will occasionally kill theirs.