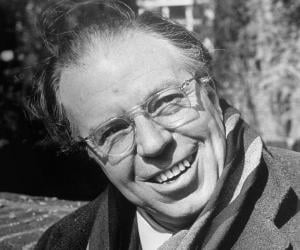 A wise man once said, “When you sell a man a book you don’t sell him just twelve ounces of paper and ink and glue — you sell him a whole new life. Love and friendship and humour and ships at sea by night — there’s all heaven and earth in a book, a real book I mean. Jiminy! If I were the baker or the butcher or the broom huckster, people would run to the gate when I came by — just waiting for my stuff. And here I go loaded with everlasting salvation — yes, ma’am, salvation for their little, stunted minds — and it’s hard to make ’em see it. That’s what makes it worthwhile — I’m doing something that nobody else from Nazareth, Maine, to Walla Walla, Washington, has ever thought of. It’s a new field, but by the bones of Whitman, it’s worthwhile. That’s what this country needs — more books!” The ingenious soul was none other than American writer Christopher Morley. The above is an excerpt from his first novel ‘Parnassus on Wheels’. Here’s another instance of Morley’s sense of humor. Apparently Morley and his friend, author William Rose Benet were window shopping and they happened to cross a wig shop. A pair of identical wigs grabbed the attention of the two men and Morley remarked that “They’re alike as toupees in a pod.”

Heavy hearts, like heavy clouds in the sky, are best relieved by the letting of a little water.

Big shots are only little shots who keep shooting.

There are three ingredients in the good life: learning, earning and yearning.

In every man's heart there is a secret nerve that answers to the vibrations of beauty.

Humor is perhaps a sense of intellectual perspective: an awareness that some things are really important, others not; and that the two kinds are most oddly jumbled in everyday affairs.

There is only one rule for being a good talker - learn to listen.

There is only one success - to be able to spend your life in your own way.

No man is lonely eating spaghetti; it requires so much attention.

A man who has never made a woman angry is a failure in life.

The courage of the poet is to keep ajar the door that leads into madness.

Life is a foreign language; all men mispronounce it.

Act like you expect to get into the end zone.

Beauty is ever to the lonely mind a shadow fleeting; she is never plain. She is a visitor who leaves behind the gift of grief, the souvenir of pain.

High heels were invented by a woman who had been kissed on the forehead.

No one appreciates the very special genius of your conversation as the dog does.

We've had bad luck with our kids - they've all grown up.

The bicycle, the bicycle surely, should always be the vehicle of novelists and poets.

When you sell a man a book, you don't sell him 12 ounces of paper and ink and glue - you sell him a whole new life.

If we discovered that we only had five minutes left to say all that we wanted to say, every telephone booth would be occupied by people calling other people to stammer that they loved them.

The trouble with wedlock is that there's not enough wed and too much lock.

I had a million questions to ask God: but when I met Him, they all fled my mind; and it didn't seem to matter.

The misfortunes hardest to bear are these which never came.

A human being: an ingenious assembly of portable plumbing.

God made man merely to hear some praise of what he'd done on those Five Days.

The real purpose of books is to trap the mind into doing its own thinking.

Only the sinner has the right to preach.

Lots of times you have to pretend to join a parade in which you're not really interested in order to get where you're going.

From now until the end of time no one else will ever see life with my eyes, and I mean to make the best of my chance.

The enemies of the future are always the very nicest people.

People like to imagine that because all our mechanical equipment moves so much faster, that we are thinking faster, too.

Words are a commodity in which there is never any slump.

Dancing is a wonderful training for girls, it's the first way you learn to guess what a man is going to do before he does it.

If you have to keep reminding yourself of a thing, perhaps it isn't so.

Why do they put the Gideon bibles only in the bedrooms, where it's usually too late?

My theology, briefly, is that the universe was dictated but not signed.

All students can learn.

We call a child's mind 'small' simply by habit; perhaps it is larger than ours is, for it can take in almost anything without effort.

It is unfair to blame man too fiercely for being pugnacious; he learned the habit from Nature.