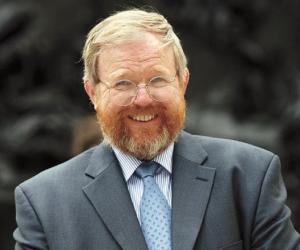 The multi-faceted writer Bill Bryson is renowned for his unique style of writing and his ability to entice readers with his ‘easy to read’ approach. And though his books have a moral stand, it is seamlessly laced with humor, thus his works are both entertaining and engaging. But did you know that Bryson was a University dropout? Learn a few more such unknown facts about this master of humor.

1. His writings are inspired by his own experiences. In the book 'Neither Here Nor There: Travels In Europe' he chronicles the trip he undertook with his friends to the continent. Several lines of 'The Life and Times of the Thunderbolt Kid', speaks of the nostalgic times of his growing up years in America.

2. In the book ‘Thunderbolt Kid’, Bryson admits to have used the real names of his family members and a childhood friend, who now happens to be his literary agent.

3. Though Bryson was born in America, he stayed in the UK for most of his adult life. He returned to America for a short while and soon returned to England. When questioned about why he never took the citizenship in the country which had become his new home, Bill replied that he was "too cowardly" to take the test.

4. The eminent writer was applauded by the Mayor of Des Moines (a place which is the world of his book ‘Thunderbolt Kid’) and Bryson was given a key to the city. However, he later confessed that the memento snapped into two pieces, while he was onboard a flight.

5. As a kid he loved to collect movie posters, comics and baseball cards. His favorite collectible was the 'Sacred Jersey of Zap', which he even mentions in the book. During one housecleaning endeavor, after the Thunderbolt Kid grew up his parents threw out his prized possessions including the Sacred Jersey.

I don't plan to write another science book, but I don't plan not to. I do enjoy writing histories, and taking subjects that are generally dull and trying to make them interesting.

I had always thought that once you grew up you could do anything you wanted.

I have long known that it is part of God's plan for me to spend a little time with each of the most stupid people on earth.

When you tell an Iowan a joke, you can see a kind of race going on between his brain and his expression.

There are things you just can't do in life. You can't beat the phone company, you can't make a waiter see you until he's ready to see you, and you can't go home again.

My first rule of consumerism is never to buy anything you can't make your children carry.

The whole of the global economy is based on supplying the cravings of two per cent of the world's population.

There are only three things that can kill a farmer: lightning, rolling over in a tractor, and old age.

More than 300 million people in the world speak English and the rest, it sometimes seems, try to.

Boston's freeway system is insane. It was clearly designed by a person who had spent his childhood crashing toy trains.

“Most scientists are without exception adorably quirky, and one of the ways of making it more accessible was to try to get readers interested in the person.”

“My first rule of travel is never to go to a place that sounds like a medical condition and Critz is clearly an incurable disease involving flaking skin.”

I had always thought that once you grew up you could do anything you wanted - stay up all night or eat ice-cream straight out of the container.