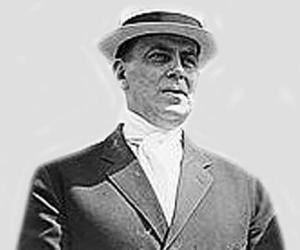 We all know about Wilson Mizner as the famous American dramatist and storyteller, but this brilliantly witty writer was also a professional boxer. He used to often hang out with fellow bruisers at local bars. Mizner was spending one such evening at a pub in San Francisco with a group of pugilists, which included a middleweight fighter known as ‘Mysterious’ Billy Smith.

In the course of the evening, Wilson challenged several dockworkers at the bar to fight duels with him. The playwright emerged victorious against all but one worker. This particular longshoreman stood upright and unflinching, despite all those blows that Mizner constantly rained upon him. The writer had almost given up in dejection, thinking he’d lost the strength he took so much pride in, when Billy Smith stopped Mizner in his tracks. Smith shouted, “Leave him alone, Wilson! I knocked him out five minutes ago.” It turned out that ‘Mysterious Billy Smith had indeed fought the dockworker, not only making the latter lose consciousness, but also shoving the poor man between two pieces of furniture. What a disappointment that must have been for Mr. Mizner!

A good listener is not only popular everywhere, but after a while, he knows something.

You sparkle with larceny.

There is something about a closet that makes a skeleton terribly restless.

Gambling: The sure way of getting nothing for something.

I can usually judge a fellow by what he laughs at.

If you count all your assets you always show a profit.

Don't talk about yourself; it will be done when you leave.

I hate careless flattery, the kind that exhausts you in your efforts to believe it.

I respect faith, but doubt is what gives you an education.

Those who welcome death have only tried it from the ears up.

It is not in life, but in art that self-fulfillment is to be found.

The cuckoo who is on to himself is halfway out of the clock.

The first hundred years are the hardest.

Art is science made clear.

To my embarrassment I was born in bed with a lady.

In the battle of existence, Talent is the punch; Tact is the clever footwork.

The best way to keep your friends is not to give them away.

To profit from good advice requires more wisdom than to give it.

The most efficient water power in the world - women's tears.

I'd rather know a square guy than own a square mile.

A fellow who is always declaring he's no fool usually has his suspicions.

Most hard-boiled people are half-baked.

Popularity is exhausting. The life of the party almost always winds up in a corner with an overcoat over him.

Life's a tough proposition, and the first hundred years are the hardest.

Failure has gone to his head.

Hollywood is a sewer with service from the Ritz Carlton.

All anger is not sinful, because some degree of it, and on some occasions, is inevitable. But it becomes sinful and contradicts the rule of Scripture when it is conceived upon slight and inadequate provocation, and when it continues long.

I know of no sentence that can induce such immediate and brazen lying as the one that begins, 'Have you read - .'

I've spent several years in Hollywood, and I still think the movie heroes are in the audience.

A drama critic is a person who surprises the playwright by informing him what he meant.

I've had ample contact with lawyers, and I'm convinced that the only fortune they ever leave is their own.

The difference between chirping out of turn and a faux pas depends on what kind of a bar you're in.

A slave has but one master. An ambition man, has as many as there are people who helped him get his fortune.