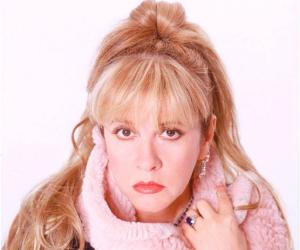 You know, the man of my dreams might walk round the corner tomorrow. I'm older and wiser and I think I'd make a great girlfriend. I live in the realm of romantic possibility.

I am pretty fearless, and you know why? Because I don't handle fear very well; I'm not a good terrified person.

If you see somebody running down the street naked every single day, you stop looking up.

If you have stage fright, it never goes away. But then I wonder: is the key to that magical performance because of the fear?

My other family is Fleetwood Mac. I don't need the money, but there's an emotional need for me to go on the road again. There's a love there; we're a band of brothers.

It was my 16th birthday - my mom and dad gave me my Goya classical guitar that day. I sat down, wrote this song, and I just knew that that was the only thing I could ever really do - write songs and sing them to people.

He and I were about as compatible as a rat and a boa constrictor.

By the time I was five, I was a little diva.

I think they all went too far. Their jeans got too low, their tops got too see-through. Personally, I think that sexy is keeping yourself mysterious. I'm really an old-fashioned girl, and I think I'm totally sexy.

Being able to take care of myself is something that my mom really instilled in me.

Do you want to be an artist and a writer, or a wife and a lover? With kids, your focus changes. I don't want to go to PTA meetings.

Everything on this record is what I really wanted to say, and I'm back to being the poet I always thought I was.

Even in my really bad, drugged-out days, I didn't go away. I still toured, still did interviews. I never gave up the fight. That's why I'm who I am today, because I didn't leave. And I think I made the right choice.

I watched Janis one time - we opened for her - and that's the only time I ever saw her. We opened for Jimi Hendrix. I got to stand on the side of the stage and watch him for two hours and then he died. But I got the essence before they left.

Men are going to go out on the road and they're going to find other women. So if you really want to save yourself a whole lot of heartache, do not fall in love with somebody in a band. Just don't.

We don't need to have somebody that's gonna make sure they pay for our market bills. It's like we have only one reason to love and that is for the real idea of love.

Rock and menopause do not mix. It is not good, it sucks and every day I fight it to the death, or, at the very least, not let it take me over.

I hated Chris, my brother. I would pull his hair and kick him, until one day my father gave him permission to fight back. I'll be apologizing to him for the rest of my life.

I didn't want to look like anyone else - like Janis Joplin or Grace Slick. That's why I never went to any of the big designers.

For 70 nights, right across America, I've been getting out there with two ex-lovers and we've been playing songs which are so specific about each of us, you just wouldn't know. We're friends now but we can't forget what happened between us.

The day before my 16th birthday I got my guitar.

When you're rich and famous you are the dominant force in a relationship, even if you try hard not to be. I've talked of sacrificing everything for Fleetwood Mac, but I realize now that it is simply the only thing I've ever wanted to do.

I preferred not to be laden down with a big instrument. If you're behind a guitar, you get used to being behind a guitar, and you don't really perform because you can't. I wanted to be able to just hold on to the mike and sing.

I made a conscious decision that I was not going to have children. I didn't want others raising them, and looking after them myself would get in the way of being a musician and writer.

Right now I'm not involved with anybody, but I hope by 75 I will be again.

I'm doing lots of interviews and stuff. I'm longing for the days of getting up, not having to put on makeup and do my hair and just going to the studio.

Prince and I were just friends. I think he would have been happy to have had a relationship.

I had Botox and I hated it. For four long months, I looked like a different person.

When you're in a band with three writers, three great writers, you only get one third of the writer thing. So that's the whole reason that I did a solo career. And that's, you know, when I told Fleetwood Mac I was going to do that, they were of course terrified that I would do that record and then that I would quit.

Singing is the love of my life, but I was ready to give it all up because I couldn't handle people talking about how fat I was.

Most women would not be happy being me. People say, 'But you're alone.' But I don't feel alone. I feel very un-alone.

I wouldn't like to be in movies. Movie people are strange. They live a different life than musicians do.

But for me, I knew that if I had a baby, I would have to take care of that baby, and I wouldn't have been happy with a nanny taking care of my baby and walking into the room and having my child run across the room to another woman.

It's really hard when you break up with somebody, or somebody breaks up with you, and you're in this band; guess who you have to see in the next day in the hotel in the breakfast room? That person.