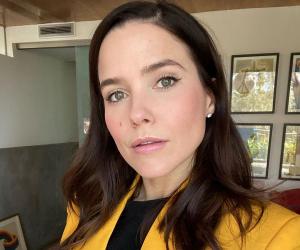 Acclaimed television actress Sophia Bush goes gaga over dogs, especially the ones that have been rescued. As a toddler, the Chicago P.D.’ star’s first love was Bouncer, a Doberman belonging to her mom.  The canine used to watch over Sophia while she slept in her crib at night.

Acknowledged for the benevolent work she does to help dogs, the renowned star says she was only 6-years-old when she adopted a puppy named Jake, born to her teacher's pet. Thanks to the support of her parents, Bush always ensured that she adopted rescue dogs and there was never a moment when the family had less than three pets at a time. Now, she has three Pit Bull mixes that have all been brought home from animal shelters. Three-year-old Griffin is the largest and the friendliest, while Penny and Patch are the other two canine companions that this talented actress takes care of. Sophia claims that, "No matter how many dogs you have in your life, you have one that's a soul-mate dog, and for me, that's Patch."

When asked what are the crazy things she did as the 'dog lady', Bush said, "Half the time people come over and look for me, and they realize I'm on the floor with the dogs or in the dog bed. I had a nozzle on a hose in the tub so I could give the dogs a full beauty shop shampoo. They don't love to get baths, but they like the after-bath routine -- the aggressive rubdowns and little massages. If I'm bathing them in the winter, I blow-dry them."

Marriage is not about age; it's about finding the right person.

Being a teenager is an amazing time and a hard time. It's when you make your best friends - I have girls who will never leave my heart and I still talk to. You get the best and the worst as a teen. You have the best friendships and the worst heartbreaks.

To be happy, it first takes being comfortable being in your own shoes. The rest can work up from there.

I was lucky. My family is wonderful. And it's funny, because most of my best friends come from very large families. So it always felt as if I had lots of siblings, though in the end I had to leave them and go home. I kind of got the best of both worlds as a kid.

Life is too short, and I'm Italian. I'd much rather eat pasta and drink wine than be a size 0.

When you realize who the good people are in your life, you're so lucky.

I think the sexiest thing on anybody is intelligence. I respect somebody who has a brain and wants to use it more than a pretty face and status.

I'm not going to dinner with somebody who eats like a bird, nor do I want to eat like a bird. But its weird: In our business, I'm a size 2 and considered curvy. Its important to remind young women, 'Listen, even skinny girls have cellulite, even Halle Berry has cellulite, and what you see in photos isn't totally real.'

I have walked away from friendships when I've realized that someone smiles to someone's face and talks about them the minute they walk out of a room. I have no room in my life for that kind of negative energy anymore.

People just deserve to be treated with kindness.

The hardest situation to stay happy in, I think, is when you're trying to find love, and yourself at the same time. It just doesn't seem to fit well.

It devastates me now that I have been reduced to a Hollywood statistic - another joke marriage.

I like all of the mental, psychological thriller movies too. I enjoy horror movies across the board.

I'm such a sucker for love and I believe in it and I always want it to win.

Brooke and I share some similarities. We're both passionate, fiercely loyal people. But she is far more outlandish than I'd ever be, particularly with her body and her sexuality. Brooke has made herself weak for men - she only gained self-confidence from their attention.

Your body tells you what it needs, and if you sleep past your alarm on a Saturday morning, it's probably because you need the sleep.

Because sorry to say, women run the house. They run the family. They hold things up. I mean, it's like you don't ever see your mom get sick because she handles everything. And it's kind of amazing I think to show people just how strong women are.

I'm a bit of a worrier, to an extreme. I'll crack a joke, then worry if I've offended someone - even when they're laughing. I have a guilt complex, always worrying.

People care about my personal life. But really I'm dorky! I drink beer and go to football games. And ya know, sit in my house in a t-shirt on the weekends and play with my dog!

I think the greatest thing that we can do is take care of each other.

I want to get married again and have kids and even adopt.

I started, whenever I got to a city, just getting on Style Seat, which is the most incredible app for any girl who doesn't have 100 stylists at her fingertips. I can see who's well-rated and whose portfolio I like, and then book an appointment all from my phone, which made having bangs a lot easier.

The more that I know of politics, the more it makes me realize that being a politician is largely useless.

So, I'm always around video games but I've always been interested in them from a visual perspective, with the graphic design and that whole thing. I don't know if that comes from my love of photography or what but that's always what's held my interest about them.

I have pretty thick eyebrows, so I'm really grateful to Brooke Shields, the first time around, and now Cara Delevingne for making that such a thing. For those of us who were born that way, it's kind of nice.

When I started training, I just started running every day, which you shouldn't do. I learned that lesson the hard way by getting a stress fracture.

The only two men I have time for are Barack Obama and my trainer.

I own four copies of Robin WIlliams's Live on Broadway comedy special for HBO. One in Wilmington, one in L.A., one in my trailer, and one at my parents' house. I can watch it over and over again and it never gets old. He is the funniest, wittiest man on the planet!

I wanted to be a doctor when I was a kid, but I started doing theater in high school because it was a requirement. At first, I was completely irritated. But I ended up loving it.

I love to box. I once took a kickboxing class in college and got totally hooked.

To me, I think people who don't think it's a big deal to toss a plastic bottle in the garbage are not only being irresponsible, but I think they're being disrespectful of all the other humans on earth.

There are fundamentalist psychopaths in every religion in the world. Every single one.

I get to experiment with a lot of looks with my character so that's really fun for me. It's like getting to paint a new canvas everyday.

I think it's easy for people to assume that fame is equal to glory, but it can be a very isolating experience.

You know, my parents have always been incredibly supportive. I'm an only child, so we're very close. There's just the three of us. They're exceptional parents but also great friends. My father was able to take his hobby, photography, and turn it into a beautiful career. So when they saw how much I loved acting, they were 100 percent behind me.

I don't think you can really, truly be the partner you want to be until you know on an absolute level that you are a complete person on your own.

I had the most incredible English and literature teachers in school, and it really influenced my love of storytelling. It's what made me excited to study journalism in college. I love editorials and documentaries. All of that came from being given the opportunity to lose myself in good writing when I was a kid.

I get to do what I love every day. I get to crawl into someone else's head and I love that.

Getting wasted is only OK when you're young enough to not know better.

I enjoy getting riled up, and nothing's gonna do that for you like a good scary movie.

Of course, everybody makes mistakes, and we've all been young and stupid. But people need to have a sense of respect, particularly in this business, because hundreds of people are ready to take your place at any time. Maybe some people should think about that.

Fashion is in my blood. Growing up, I was always clacking around the house in my mother's shoes.

In the initial season of a show, you're figuring out your character and their life and their background and you're putting together all the chapters of the book.

Life throws some curveballs at you and you go where it takes you.

My dream job is to be the Robin to Anderson Cooper's Batman.

I'd rather hang out with five people that I love than with 400 strangers at a club who are all doing the up-and-down inspection thing. They appraise everybody from head to toe - the outfit, the handbag, the shoes, how much they weigh... I can't stand it!

I love boxing. There's something fierce about using your body's force that way.

Mystery makes movie stars! If you see someone on the cover of the weeklies all the time, why would you want to pay to see them in a movie?

Because I'm 5'4' and athletically built, if I gain five pounds it looks like a lot.

Me, I'd prefer to have a good reputation rather than getting press for being scandalous, getting drunk in public, staying out late and so on.

I want to play everything. I really want to do it all.

I believe all men, all women, regardless of race, gender, socioeconomic background, you deserve the same rights.

If I spend a Saturday being lazy and curled up on the couch with my dogs, I'll just make sure to get out and be active on Sunday.

I was a total education geek. I loved school. I loved learning. I loved doing homework. All of my books and notebooks from high school are underlined and highlighted and there are notes all over the margins. And you know, I was a theater kid too. I was all over the place.

All the sudden high-impact stress can really take a toll on your body. So if you still want to be active and get in a good workout, go to a yoga class or pilates class, or get in some strength and conditioning.

Two people who I think have the world's most perfect skin are Cate Blanchett and Kate Bosworth. Maybe there's something to being named Kate, I don't know, but those two just seem to be effortless, yet completely, ethereally gorgeous.

I've started to treat my health like a science project.

If I wasn't an actor, I'd probably be working in journalism.

Tacos are the perfect food.

I believe in the joyous power of an unscheduled dance break.

I'm not a waif-y girl and never will be. I think it's healthy when fitness experts encourage fitness rather than getting a certain body shape.

I believe people are inherently magical and good.

It's no secret - if you know me, have ever met me or have shared a meal with me - that I'm a passionate environmentalist.