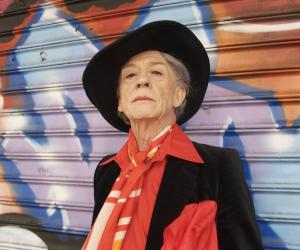 English writer, Quentin Crisp, the “the great gay icon of the western world” found more prominence in New York than in his own nation. This colorful personality had his own views of what he thought of the dissimilarities between the Americans and the English. Though recorded anecdotes of his life were far and few in between, this raconteur had several interesting stories to tell about his own experiences.

One day, he met an Englishman who said, “You're the one who lives here permanently now aren't you?” Crisp replied, “Yes.” When asked why, the brilliant writer said, “Because everywhere I go everybody talks to me”. And the Englishman exclaimed, “I can't think of anything worse”.

According to Crisp, the entire world thinks that Americans are optimistic almost to the point of being childlike, but he says, “but I think it's a better thing to be”. He  believes, “In America, whatever you do, everyone is for it. You say to your friends here I'm getting up a cabaret act. They say, ‘What will you sing, what will you wear, where are you going to do it, can I accompany you?’ In England, if you tell your friends you’re getting up a cabaret act, one of them would say, ‘For God's sake, don't make a fool of yourself’.

Thus, Crisp believes that he’s always been an American at heart despite being English by nationality; right from the time he accompanied his mother to watch Hollywood movies.

If at first you don't succeed, failure may be your style.

However low a man sinks he never reaches the level of the police.

You fall out of your mother's womb, you crawl across open country under fire, and drop into your grave.

Fashion is what you adopt when you don't know who you are.

My mother protected me from the world and my father threatened me with it.

There is no need to do any housework at all. After the first four years the dirt doesn't get any worse.

Never keep up with the Joneses. Drag them down to your level.

To know all is not to forgive all. It is to despise everybody.

It's no good running a pig farm badly for 30 years while saying, 'Really, I was meant to be a ballet dancer.' By then, pigs will be your style.

The formula for achieving a successful relationship is simple: you should treat all disasters as if they were trivialities but never treat a triviality as if it were a disaster.

It is explained that all relationships require a little give and take. This is untrue. Any partnership demands that we give and give and give and at the last, as we flop into our graves exhausted, we are told that we didn't give enough.

The young always have the same problem - how to rebel and conform at the same time. They have now solved this by defying their parents and copying one another.

I recommend limiting one's involvement in other people's lives to a pleasantly scant minimum.

Men get laid, but women get screwed.

Life was a funny thing that happened to me on the way to the grave.

Love is not enough. It must be the foundation, the cornerstone - but not the complete structure. It is much too pliable, too yielding.

In an expanding universe, time is on the side of the outcast. Those who once inhabited the suburbs of human contempt find that without changing their address they eventually live in the metropolis.

When I told the people of Northern Ireland that I was an atheist, a woman in the audience stood up and said, 'Yes, but is it the God of the Catholics or the God of the Protestants in whom you don't believe?

Sex is the last refuge of the miserable.

Abatement in the hostility of one's enemies must never be thought to signify they have been won over. It only means that one has ceased to constitute a threat.

The poverty from which I have suffered could be diagnosed as 'Soho' poverty. It comes from having the airs and graces of a genius and no talent.

I simply haven't the nerve to imagine a being, a force, a cause which keeps the planets revolving in their orbits and then suddenly stops in order to give me a bicycle with three speeds.

The British do not expect happiness. I had the impression, all the time that I lived there, that they do not want to be happy; they want to be right.

The very purpose of existence is to reconcile the glowing opinion we hold of ourselves with the appalling things that other people think about us.

Vice is its own reward. It is virtue which, if it is to be marketed with consumer appeal, must carry Green Shield stamps.

Health consists of having the same diseases as one's neighbors.

An autobiography is an obituary in serial form with the last installment missing.

Manners are love in a cool climate.

For an introvert his environment is himself and can never be subject to startling or unforeseen change.

There are three reasons for becoming a writer: the first is that you need the money; the second that you have something to say that you think the world should know; the third is that you can't think what to do with the long winter evenings.

The trouble with children is that they're not returnable.

Nothing more rapidly inclines a person to go into a monastery than reading a book on etiquette. There are so many trivial ways in which it is possible to commit some social sin.

The consuming desire of most human beings is deliberately to plant their whole life in the hands of some other person. I would describe this method of searching for happiness as immature. Development of character consists solely in moving toward self-sufficiency.

Though intelligence is powerless to modify character, it is a dab hand at finding euphemisms for its weaknesses.

It is not the simple statement of facts that ushers in freedom; it is the constant repetition of them that has this liberating effect. Tolerance is the result not of enlightenment, but of boredom.

The law is simply expediency wearing a long white dress.

Nothing shortens a journey so pleasantly as an account of misfortunes at which the hearer is permitted to laugh.

Living en famille provides the strongest motives for rudeness combined with the maximum opportunity for displaying it.

Decency must be an even more exhausting state to maintain than its opposite. Those who succeed seem to need a stupefying amount of sleep.

Is not the whole world a vast house of assignation of which the filing system has been lost?