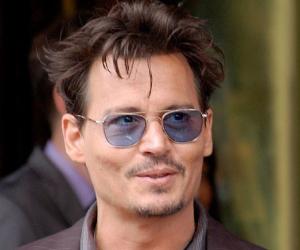 Miramar High School, Henry D. Perry Middle School
Actors, Film & Theater Personalities, T V & Movie Producers
Johnny Depp (aka "Captain Jack Sparrow") may be loved for his quirky roles in most Tim Burton movies, but there are various other reasons why you can't stop admiring this man. Once while this talented actor was filming in Wisconsin, he met Jack Taylor, a 12-year-old kid who incidentally loved the hat Depp was wearing. The star obliged and promised to gift the hat to Taylor once the movie was made. True to his word, Depp sent the boy the hat along with other accoutrements and knick knacks used during the filming of 'Charlie and the Chocolate Factory'. However, the "Pirates of The Carribean" star surpassed the boy's expectations by a mile. The star sent a personalized letter to Taylor that said, "Here is a hat for you. Hope you like this and assorted fun bits." No that was the icing on the cake. On another occasion, a nine-year-old girl, Beatrice Delap sent a note addressed to Captain Jack Sparrow, requesting his assistance in organizing a "mutiny" against the teachers of her school. She signed off with, "Beatrice Delap, aged nine, a budding pirate." Since the celebrated actor was already in location, he travelled to the school in the "Pirates of the Caribbean" costume, met Beatrice, spent time with her and even suggested, "Maybe we shouldn't mutiny today 'cos there are police outside monitoring me." Need we say more about this colorful personality who even has the fossil "Kooteninchela deppi" named after him?

It's all kinds of these profound things crashing on you when your child arrives into the world. It's like you've met your reason to live.

If you catch me saying 'I am a serious actor,' I beg you to slap me.

People say I make strange choices, but they're not strange for me. My sickness is that I'm fascinated by human behavior, by what's underneath the surface, by the worlds inside people.

When kids hit one year old, it's like hanging out with a miniature drunk. You have to hold onto them. They bump into things. They laugh and cry. They urinate. They vomit.

The beauty, the poetry of the fear in their eyes. I didn't mind going to jail for, what, five, six hours? It was absolutely worth it

The quality of life is so different in France. There is the possibility of living a simple life. I would never contemplate raising my daughter in LA. I would never raise any child there.

The only gossip I'm interested in is things from the Weekly World News - 'Woman's bra bursts, 11 injured'. That kind of thing.

It's good to experience Hollywood in short bursts, I guess. Little snippets. I don't think I can handle being here all the time, it's pretty nutty.

There are four questions of value in life... What is sacred? Of what is the spirit made? What is worth living for, and what is worth dying for? The answer to each is the same. Only love.

You use your money to buy privacy because during most of your life you aren't allowed to be normal.

Life's pretty good, and why wouldn't it be? I'm a pirate, after all.

Anything I've done up till May 27th 1999 was kind of an illusion, existing without living. My daughter, the birth of my daughter, gave me life.

I think the thing to do is enjoy the ride while you're on it.

I'm shy, paranoid, whatever word you want to use. I hate fame. I've done everything I can to avoid it.

I was ecstatic they re-named 'French Fries' as 'Freedom Fries'. Grown men and women in positions of power in the U.S. government showing themselves as idiots.

I'm an old-fashioned guy... I want to be an old man with a beer belly sitting on a porch, looking at a lake or something.