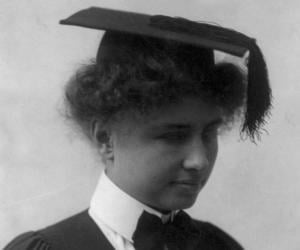 Prolific writer Helen Keller's inspiring story continues impress many. With the help of her teacher and friend Anne Sullivan she learnt to communicate through finger-spelling, lip-reading, reading Braille and even using a typewriter. Not only that she became one of the first deaf and blind person to earn a Bachelor of Arts degree. She was friends with many eminent people of the time including author Mark Twain and inventor Alexander Graham Bell. Here is a story where Mark Twain recounts the first time he met Helen.

A group of 12-15 people had gathered at Mark's friend's place and it so happened that fourteen-year-old Helen was also invited. The hosts introduced her to the guests one by one. Mark noted that after shaking each of their hands, Helen would lay her fingers slightly against the lips of Anne, who in turn would speak the name of the guest. When she found a name difficult, Miss Sullivan would use her fingers to spell it on Helen's hand.

After the pleasantries were exchanged and everyone settled, someone asked if Helen would be able to discriminate among them just by feeling their hands and how would she remember the feel of everyone's palm. To this Miss Sullivan replied, "Oh she will have no difficulty about that." Curious to see how such a thing was possible they decided to test Helen's ability and everyone approached her one by one and shook her hands. The deaf and blind teenager girl surprised all as she spoke the name of each individual correctly without any hesitation.

Keep your face to the sunshine and you cannot see a shadow.

Faith is the strength by which a shattered world shall emerge into the light.

The only thing worse than being blind is having sight but no vision.

Walking with a friend in the dark is better than walking alone in the light.

We can do anything we want to if we stick to it long enough.

Optimism is the faith that leads to achievement. Nothing can be done without hope and confidence.

The best and most beautiful things in the world cannot be seen or even touched - they must be felt with the heart.

What we have once enjoyed we can never lose. All that we love deeply becomes a part of us.

Character cannot be developed in ease and quiet. Only through experience of trial and suffering can the soul be strengthened, ambition inspired, and success achieved.

Security is mostly a superstition. It does not exist in nature, nor do the children of men as a whole experience it. Avoiding danger is no safer in the long run than outright exposure. Life is either a daring adventure, or nothing.

The highest result of education is tolerance.

The world is moved along, not only by the mighty shoves of its heroes, but also by the aggregate of tiny pushes of each honest worker.

Everything has its wonders, even darkness and silence, and I learn, whatever state I may be in, therein to be content.

Love is like a beautiful flower which I may not touch, but whose fragrance makes the garden a place of delight just the same.

Knowledge is love and light and vision.

Never bend your head. Always hold it high. Look the world straight in the eye.

Although the world is full of suffering, it is also full of the overcoming of it.

We could never learn to be brave and patient, if there were only joy in the world.

True happiness... is not attained through self-gratification, but through fidelity to a worthy purpose.

Life is either a great adventure or nothing.

So long as the memory of certain beloved friends lives in my heart, I shall say that life is good.

One can never consent to creep when one feels an impulse to soar.

When we do the best that we can, we never know what miracle is wrought in our life, or in the life of another.

It's wonderful to climb the liquid mountains of the sky. Behind me and before me is God and I have no fears.

I seldom think about my limitations, and they never make me sad. Perhaps there is just a touch of yearning at times; but it is vague, like a breeze among flowers.

Avoiding danger is no safer in the long run than outright exposure. The fearful are caught as often as the bold.

The marvelous richness of human experience would lose something of rewarding joy if there were no limitations to overcome. The hilltop hour would not be half so wonderful if there were no dark valleys to traverse.

Death is no more than passing from one room into another. But there's a difference for me, you know. Because in that other room I shall be able to see.

Self-pity is our worst enemy and if we yield to it, we can never do anything wise in this world.

The most pathetic person in the world is someone who has sight, but has no vision.

Your success and happiness lies in you. Resolve to keep happy, and your joy and you shall form an invincible host against difficulties.

To me a lush carpet of pine needles or spongy grass is more welcome than the most luxurious Persian rug.

Many persons have a wrong idea of what constitutes true happiness. It is not attained through self-gratification but through fidelity to a worthy purpose.

Once I knew only darkness and stillness... my life was without past or future... but a little word from the fingers of another fell into my hand that clutched at emptiness, and my heart leaped to the rapture of living.

Until the great mass of the people shall be filled with the sense of responsibility for each other's welfare, social justice can never be attained.

No pessimist ever discovered the secret of the stars, or sailed to an uncharted land, or opened a new doorway for the human spirit.

I can see, and that is why I can be happy, in what you call the dark, but which to me is golden. I can see a God-made world, not a manmade world.

All the world is full of suffering. It is also full of overcoming.

Toleration is the greatest gift of the mind; it requires the same effort of the brain that it takes to balance oneself on a bicycle.

It is a terrible thing to see and have no vision.

What I am looking for is not out there, it is in me.

It is wonderful how much time good people spend fighting the devil. If they would only expend the same amount of energy loving their fellow men, the devil would die in his own tracks of ennui.

Life is an exciting business, and most exciting when it is lived for others.

Science may have found a cure for most evils; but it has found no remedy for the worst of them all - the apathy of human beings.

Smell is a potent wizard that transports you across thousands of miles and all the years you have lived.

College isn't the place to go for ideas.

People do not like to think. If one thinks, one must reach conclusions. Conclusions are not always pleasant.

As the eagle was killed by the arrow winged with his own feather, so the hand of the world is wounded by its own skill.

It is for us to pray not for tasks equal to our powers, but for powers equal to our tasks, to go forward with a great desire forever beating at the door of our hearts as we travel toward our distant goal.

Literature is my Utopia. Here I am not disenfranchised. No barrier of the senses shuts me out from the sweet, gracious discourses of my book friends. They talk to me without embarrassment or awkwardness.

We may have found a cure for most evils; but we have found no remedy for the worst of them all, the apathy of human beings.

The heresy of one age becomes the orthodoxy of the next.

Of all the senses, sight must be the most delightful.

What a blind person needs is not a teacher but another self.

No matter how dull, or how mean, or how wise a man is, he feels that happiness is his indisputable right.

My share of the work may be limited, but the fact that it is work makes it precious.

It is not possible for civilization to flow backwards while there is youth in the world. Youth may be headstrong, but it will advance it allotted length.

No one has a right to consume happiness without producing it.

Many people know so little about what is beyond their short range of experience. They look within themselves - and find nothing! Therefore they conclude that there is nothing outside themselves either.

Strike against war, for without you no battles can be fought!

Instead of comparing our lot with that of those who are more fortunate than we are, we should compare it with the lot of the great majority of our fellow men. It then appears that we are among the privileged.

As selfishness and complaint pervert the mind, so love with its joy clears and sharpens the vision.

Unless we form the habit of going to the Bible in bright moments as well as in trouble, we cannot fully respond to its consolations because we lack equilibrium between light and darkness.