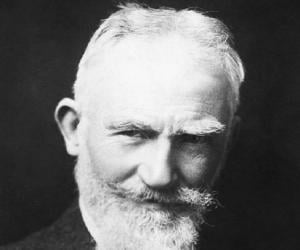 Wesley College
Writers
Apart from his literary prowess, Irish playwright George Bernard Shaw also gained a lot of prominence for his dry humor and sarcasm. This aspect of his personality was very evident during Shaw's interactions with those who wished to use his literary works to gain commercial success. One such instance was during the meeting between the renowned American movie producer, Sam Goldwyn and George. Sam contacted Shaw to buy the rights for a few of the acclaimed author's plays. The writer put forth an extensive set of rigid terms, which Goldwyn presumed he could haggle about. The Hollywood stalwart tried deterring the playwright from his stance by saying, "Think of millions of people who would get a chance to see your plays who would otherwise never see them. Think of the contribution it would be to art." To this, the master of wit replied, "The trouble is, Mr. Goldwyn, that you think of nothing but Art and I think of nothing but money." However, the attitude of Shaw was completely different when the then struggling Hungarian filmmaker, Gabriel Pascal approached the writer. Pascal expressed his interest in producing the dramatist's plays. When asked how much money the film-maker had for funding the works, Gabriel replied, "Fifteen shillings and six pence - but I owe a pound." His brazenness impressed Shaw to such an extent that the author went ahead and paid the one pound to the film-maker to clear off all debts. Their association resulted in the highly acclaimed 1938 British film, "Pygmalion". They also went on to create magic with subsequent movies such as "Caesar and Cleopatra" and "Major Barbara".

Youth is wasted on the young.

I often quote myself. It adds spice to my conversation.

A life spent making mistakes is not only more honorable, but more useful than a life spent doing nothing.

There is no sincerer love than the love of food.

I learned long ago, never to wrestle with a pig. You get dirty, and besides, the pig likes it.

The single biggest problem in communication is the illusion that it has taken place.

You see things; and you say 'Why?' But I dream things that never were; and I say 'Why not?'

The power of accurate observation is commonly called cynicism by those who have not got it.

A happy family is but an earlier heaven.

You cannot be a hero without being a coward.

Democracy is a device that ensures we shall be governed no better than we deserve.

A government that robs Peter to pay Paul can always depend on the support of Paul.

Beware of false knowledge; it is more dangerous than ignorance.

Better keep yourself clean and bright; you are the window through which you must see the world.

If you cannot get rid of the family skeleton, you may as well make it dance.

England and America are two countries separated by the same language.

Imagination is the beginning of creation. You imagine what you desire, you will what you imagine and at last you create what you will.

Take care to get what you like or you will be forced to like what you get.

Without art, the crudeness of reality would make the world unbearable.

Patriotism is your conviction that this country is superior to all others because you were born in it.

We are made wise not by the recollection of our past, but by the responsibility for our future.

The possibilities are numerous once we decide to act and not react.

Silence is the most perfect expression of scorn.

Alcohol is the anesthesia by which we endure the operation of life.

If history repeats itself, and the unexpected always happens, how incapable must Man be of learning from experience.

Life does not cease to be funny when people die any more than it ceases to be serious when people laugh.

There are two tragedies in life. One is to lose your heart's desire. The other is to gain it.

I am afraid we must make the world honest before we can honestly say to our children that honesty is the best policy.

The secret to success is to offend the greatest number of people.

He knows nothing and thinks he knows everything. That points clearly to a political career.

If all the economists were laid end to end, they'd never reach a conclusion.

The only secrets are the secrets that keep themselves.

Love is a gross exaggeration of the difference between one person and everybody else.

Liberty means responsibility. That is why most men dread it.

Power does not corrupt men; fools, however, if they get into a position of power, corrupt power.

The worst sin toward our fellow creatures is not to hate them, but to be indifferent to them: that's the essence of inhumanity.

Beauty is all very well at first sight; but who ever looks at it when it has been in the house three days?

Youth is a wonderful thing. What a crime to waste it on children.

Democracy substitutes election by the incompetent many for appointment by the corrupt few.

All great truths begin as blasphemies.

Kings are not born: they are made by artificial hallucination.

The faults of the burglar are the qualities of the financier.

He who can, does. He who cannot, teaches.

A fashion is nothing but an induced epidemic.

No man ever believes that the Bible means what it says: He is always convinced that it says what he means.

Do not do unto others as you expect they should do unto you. Their tastes may not be the same.

The liar's punishment is not in the least that he is not believed, but that he cannot believe anyone else.

If women were particular about men's characters, they would never get married at all.

Clever and attractive women do not want to vote; they are willing to let men govern as long as they govern men.

Use your health, even to the point of wearing it out. That is what it is for. Spend all you have before you die; do not outlive yourself.

It's so hard to know what to do when one wishes earnestly to do right.

Nothing is worth doing unless the consequences may be serious.

While we ourselves are the living graves of murdered animals, how can we expect any ideal living conditions on this earth?

It is dangerous to be sincere unless you are also stupid.

The best place to find God is in a garden. You can dig for him there.

When a stupid man is doing something he is ashamed of, he always declares that it is his duty.

The only way to avoid being miserable is not to have enough leisure to wonder whether you are happy or not.

Choose silence of all virtues, for by it you hear other men's imperfections, and conceal your own.

Statistics show that of those who contract the habit of eating, very few survive.

An election is a moral horror, as bad as a battle except for the blood; a mud bath for every soul concerned in it.

I enjoy convalescence. It is the part that makes the illness worth while.

No question is so difficult to answer as that to which the answer is obvious.

Everything happens to everybody sooner or later if there is time enough.

You can always tell an old soldier by the inside of his holsters and cartridge boxes. The young ones carry pistols and cartridges; the old ones, grub.

There is only one religion, though there are a hundred versions of it.

There are no secrets better kept than the secrets everybody guesses.

Peace is not only better than war, but infinitely more arduous.

I'm an atheist and I thank God for it.

Hell is full of musical amateurs.

The only service a friend can really render is to keep up your courage by holding up to you a mirror in which you can see a noble image of yourself.

Few people think more than two or three times a year; I have made an international reputation for myself by thinking once or twice a week.

Socialism is the same as Communism, only better English.

You'll never have a quiet world till you knock the patriotism out of the human race.

One man that has a mind and knows it can always beat ten men who haven't and don't.

A perpetual holiday is a good working definition of hell.

Creation is a miracle of daily recurrence. 'A miracle a minute' would not be a bad slogan for God.

Dancing is a perpendicular expression of a horizontal desire.

It is the mark of a truly intelligent person to be moved by statistics.

An Englishman thinks he is moral when he is only uncomfortable.

It is a curious sensation: the sort of pain that goes mercifully beyond our powers of feeling. When your heart is broken, your boats are burned: nothing matters any more. It is the end of happiness and the beginning of peace.