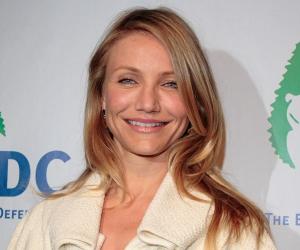 “You were approaching 40, was it scary to you? Was it something you were looking forward to?” asked Oprah Winfrey. The way actress Cameron Diaz replied is something most actresses would probably never say even in their wildest dreams. She said, "Oh, now life begins. Oh, this is it! This is the coolest thing ever."

Though it is not normal for an actress of her caliber to come out in the open and accept her age so gracefully, Diaz has set a fashionable trend to do so. She says, “It's a gradual thing and you get to learn about yourself and see yourself and start to live with who you are as you go.” This beauty did not take the regular path of relying on Botox and wanted to experience the natural process of aging instead. Still one of the highest paid actresses in the entertainment industry, Cameron feels that the obsession to look younger than one’s age is absolutely unnecessary and worthless.

Though this blonde beauty did succumb to pressure during her younger days, Diaz repents the decision she took back then. Cameron is not wary of aging or wrinkles anymore and loves the process of aging naturally. It is this confidence and self-assurance about her, that makes her hold the reins to a million hearts all over the world. Now, you don’t come across many actresses like her every day, do you?

I have to remind my dad, 'Journalists - no matter how many cigars they smoke with you - are not your friends, so don't talk to them.'

I did all my heavy partying before I turned sixteen.

I don't believe you should make fun of anyone but yourself.

People think I'm trying to make a fashion statement because I never wear a bra. It's really that I'm a tomboy at heart.

Acting is something different to everybody. I just know that if you watch an actor or actress getting better and better, I think that's them just understanding themselves better and better.

Acting allows me to tell a lot of stories, you know start at the beginning, finish at the end, and tell everything in between. Modelling is just an image.

Every casting director I've met is a woman.

Everything's a risk, by the way, these days. Every film you make is a risk. There's no guarantee.

I don't care how smart a kid you are. The only way you learn what's not right is from experience.

I think I've become more comfortable about being a human being.

I don't even own a TV because I think it's the devil.

I hate committing myself to anything. It's probably the lack of discipline, honestly. I'm probably a spoiled brat worried about getting my way every time.

You haven't partied until you've partied at dawn in complete silence with Buddhist monks.

French fries. I love them. Some people are chocolate and sweets people. I love French fries. That and caviar.

I would love a family. I'm at the age where the wish for a child gets stronger. But who knows.