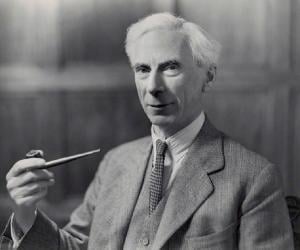 A logician par excellence, Bertrand Russell was also known for his impeccable sense of humor and witty retorts. Apparently once he made a claim that if 1+1 =1 is true, then it is possible to prove anything true. Someone decided to put Russell to test and asked the man to prove that he was the Pope. Russell mulled over the question for a while and then answered, "I am one.  The Pope is one.  Therefore, the Pope and I are one."

The logician was also one of the masterminds behind analytic philosophy and a champion of the anti-war movement. After the infamous ‘World War II’, a Cold War ensued between the Eastern and Western Bloc. Bertrand was invited to deliver a lecture on politics in England during this conflict-stricken period. Since he was a leftist, the members of the Conservative club did not take a liking to the speaker. Enraged by his views, the ladies started assaulting Russell with whatever they could lay their hands on. The guard on duty was faced with a predicament, since the assaulters were women, he could not be rude to them but he also had to save Bernard. This guard tried his best to pacify the women and felt maybe they would mellow down if he told them about how influential Russell was. He first said "But he is a great mathematician!" but the mob ignored him. Later, the guard tried a different tactic and this time he shouted "But he is a great philosopher!" However, there was no effect on the ladies as they continued to ignore his pleas. Finally the guard uttered, "But his brother is an earl!" Fortunately, this time the guard got the attention of the ladies and Bernard was finally rescued.

A happy life must be to a great extent a quiet life, for it is only in an atmosphere of quiet that true joy dare live.

The good life is one inspired by love and guided by knowledge.

Freedom of opinion can only exist when the government thinks itself secure.

To be without some of the things you want is an indispensable part of happiness.

The secret to happiness is to face the fact that the world is horrible.

To fear love is to fear life, and those who fear life are already three parts dead.

The secret of happiness is this: let your interests be as wide as possible, and let your reactions to the things and persons that interest you be as far as possible friendly rather than hostile.

Both in thought and in feeling, even though time be real, to realise the unimportance of time is the gate of wisdom.

A sense of duty is useful in work but offensive in personal relations. People wish to be liked, not to be endured with patient resignation.

Men who are unhappy, like men who sleep badly, are always proud of the fact.

No one gossips about other people's secret virtues.

Mathematics may be defined as the subject in which we never know what we are talking about, nor whether what we are saying is true.

Those who in principle oppose birth control are either incapable of arithmetic or else in favor of war, pestilence and famine as permanent features of human life.