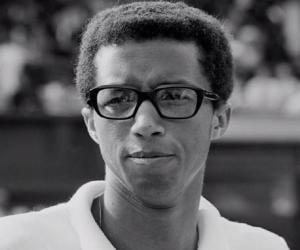 University of California, Los Angeles, Sumner High School, Maggie L. WalkerGovernor's School for Government and International Studies,
Sportspersons, Tennis Players
Arthur Ashe has left an undeniable mark in the field of tennis since he was the first African American to reach the highest position possible in this field. Climbing the ladder of success was quite a herculean task for this 3 time "Grand Slam" title winner. His mother passed away when Arthur was about 6 years, and his father was quite strict. The man was fond of Arthur but did not want him to misuse the fact that he did not have a mother. Consequently, Arthur led an extremely controlled childhood. The tennis champ says, "My father " kept me home, out of trouble. I had exactly 12 minutes to get home from school, and I kept to that rule through high school." One day Ashe found a tennis racket in a park near his house and thus began the incredible journey of a 7-year-old boy, who rose to become the world's number 1 tennis player. The last 14 years of this sportsman's life was beleaguered with terrible ailments, like AIDS and finally succumbed to the dreaded disease in 1993. A year before his death, the tennis player said in an interview that, suffering from AIDS was not the biggest burden in his life, but being black was. The tales of Ashe's struggle to taste success proves that if we want to succeed in life, there is absolutely nothing that can stop us.

Success is a journey, not a destination. The doing is often more important than the outcome.

Start where you are. Use what you have. Do what you can.

Trust has to be earned, and should come only after the passage of time.

From what we get, we can make a living; what we give, however, makes a life.

You've got to get to the stage in life where going for it is more important than winning or losing.

The ideal attitude is to be physically loose and mentally tight.

Clothes and manners do not make the man; but when he is made, they greatly improve his appearance.

I may not be walking with you all the way, or even much of the way, as I walk with you now.

We must believe in the power of education. We must respect just laws. We must love ourselves, our old and or young, our women as well as our men.

You learn about equality in history and civics, but you find out life is not really like that.

I guess I started too early because I just thought it was something fun to do.

I keep sailing on in this middle passage. I am sailing into the wind and the dark. But I am doing my best to keep my boat steady and my sails full.

I have tried to keep on with my striving because this is the only hope I have of ever achieving anything worthwhile and lasting.

When we were together, I loved you deeply and you gave me so much happiness I can never repay you.

Let me put it this way: I think Republicans tend to keep the ball in play, Democrats go for broke.

My potential is more than can be expressed within the bounds of my race or ethnic identity.

I don't care who you are, you're going to choke in certain matches. You get to a point where your legs don't move and you can't take a deep breath. You start to hit the ball about a yard wide, instead of inches.

Later, I discovered there was a lot of work to being good in tennis.

If you're paid before you walk on the court, what's the point in playing as if your life depended on it?

Do not feel sorry for me if I am gone.

I accepted the face that as much as I want to lead others, and love to be around other people, in some essential way, I am something of a loner.

I have always drawn strength from being close to home.

There is a syndrome in sports called 'paralysis by analysis.'

A wise person decides slowly but abides by these decisions.

I don't want to be remembered for my tennis accomplishments.