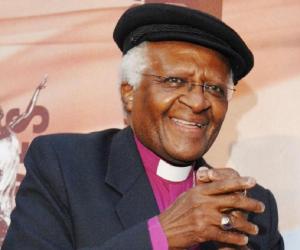 On 22nd March 2014, in an interview, a 43-year-old man remembered a dreadful incident from his past involving his parents. He was then a young boy who could do nothing but watch his father physically and verbally abuse his mother under the influence of liquor.

His inability to protect his mother from the ‘demonic’ clutches of his alcoholic father, led to the building of frustration and anger within this young lad. This boy wanted to hurt his father back, for the way he had tormented his mother, ruined her life and consequently his too. As time went by, this unfortunate boy grew up to be the opposite of what he was. The boy we are speaking about is none other than Archbishop Desmond Tutu, who is considered to be the epitome of forgiveness. During this 2014 chat, Tutu said that even though forgiveness is an exceptionally tough task, if his father came back from the dead he would forgive him.

When asked if he was given a chance to talk to his father now, he says “I would begin by thanking him for all the wonderful things he did for me as my father, but then I would tell him that there was this one thing that hurt me very much. I would tell him how, what he did to my mother affected me, how it pained me.” Desmond believes that every human should be forgiven, since we all make mistakes. "I am sorry" are the toughest words to utter, says the Archbishop. The pontiff opines that there is immense happiness in asking for forgiveness and it is divine to accept apology. Probably, it was these ideologies that helped him reach great heights in life. Being graced with awards like ‘Nobel Peace Prize’ and the ‘Gandhi Peace Prize’ speak volumes about the transformation of this person from being a grief-stricken little boy to a wise man.

Exclusion is never the way forward on our shared paths to freedom and justice.

But God can only smile because only God can know what is coming next.

If you are neutral in situations of injustice, you have chosen the side of the oppressor. If an elephant has its foot on the tail of a mouse and you say that you are neutral, the mouse will not appreciate your neutrality.

You don't choose your family. They are God's gift to you, as you are to them.

Hope is being able to see that there is light despite all of the darkness.

Do your little bit of good where you are; it's those little bits of good put together that overwhelm the world.

I am not interested in picking up crumbs of compassion thrown from the table of someone who considers himself my master. I want the full menu of rights.

Peace comes when you talk to the guy you most hate. And that's where the courage of a leader comes, because when you sit down with your enemy, you as a leader must already have very considerable confidence from your own constituency.

Without forgiveness, there's no future.

We may be surprised at the people we find in heaven. God has a soft spot for sinners. His standards are quite low.

Forgiveness says you are given another chance to make a new beginning.

God's dream is that you and I and all of us will realize that we are family, that we are made for togetherness, for goodness, and for compassion.

For goodness sake, will they hear, will white people hear what we are trying to say? Please, all we are asking you to do is to recognize that we are humans, too.

My humanity is bound up in yours, for we can only be human together.

You must show the world that you abhor fighting.

Your ordinary acts of love and hope point to the extraordinary promise that every human life is of inestimable value.

Because forgiveness is like this: a room can be dank because you have closed the windows, you've closed the curtains. But the sun is shining outside, and the air is fresh outside. In order to get that fresh air, you have to get up and open the window and draw the curtains apart.

Inclusive, good-quality education is a foundation for dynamic and equitable societies.

We are each made for goodness, love and compassion. Our lives are transformed as much as the world is when we live with these truths.

In the land of my birth I cannot vote, whereas a young person of eighteen can vote. And why? Because he or she possesses that wonderful biological attribute - a white skin.

A person is a person because he recognizes others as persons.

The price of freedom is eternal vigilance.

Universal education is not only a moral imperative but an economic necessity, to pave the way toward making many more nations self-sufficient and self-sustaining.

I am a leader by default, only because nature does not allow a vacuum.

We inhabit a universe that is characterized by diversity.

Isn't it amazing that we are all made in God's image, and yet there is so much diversity among his people?

Before Nelson Mandela was arrested in 1962, he was an angry, relatively young man. He founded the ANC's military wing. When he was released, he surprised everyone because he was talking about reconciliation and forgiveness and not about revenge.

Be nice to whites, they need you to rediscover their humanity.

When a pile of cups is tottering on the edge of the table and you warn that they will crash to the ground, in South Africa you are blamed when that happens.

For Christians, who believe they are created in the image of God, it is the Godhead, diversity in unity and the three-in-oneness of God, which we and all creation reflect.

Children are a wonderful gift. They have an extraordinary capacity to see into the heart of things and to expose sham and humbug for what they are.

In my country of South Africa, we struggled for years against the evil system of apartheid that divided human beings, children of the same God, by racial classification and then denied many of them fundamental human rights.

Oh, 1994, April 27. There won't be a day like that ever again. I mean, the sky was blue, with a blueness that had never been there before.

God's love is too great to be confined to any one side of a conflict or to any one religion.

Racism, xenophobia and unfair discrimination have spawned slavery, when human beings have bought and sold and owned and branded fellow human beings as if they were so many beasts of burden.

What is black empowerment when it seems to benefit not the vast majority but an elite that tends to be recycled?

Those who invest in South Africa should not think they are doing us a favor; they are here for what they get out of our cheap and abundant labor, and they should know that they are buttressing one of the most vicious systems.

The God who existed before any religion counts on you to make the oneness of the human family known and celebrated.

The universe can take quite a while to deliver.

I've never doubted that apartheid - because it was of itself fundamentally, intrinsically evil - was going to bite the dust eventually.

In South Africa, we could not have achieved our freedom and just peace without the help of people around the world, who through the use of non-violent means, such as boycotts and divestment, encouraged their governments and other corporate actors to reverse decades-long support for the Apartheid regime.

As human beings we have the most extraordinary capacity for evil. We can perpetrate some of the most horrendous atrocities.

It's a blessing that South Africa has a man like Nelson Mandela.

It is our moral obligation to give every child the very best education possible.

And every human being is precious.

When you think of the sort of things that happen when a genocide happens, it's again not people who are intrinsically evil.

Be nice to the whites, they need you to rediscover their humanity.

The minute you got the Nobel Peace Prize, things that I said yesterday, with nobody paying too much attention, I say the same things after I got it - oh! It was quite crucial for people, and it helped our morale because apartheid did look invincible.

I certainly know that I would not be able to survive if it were not for the fact that I am being upheld by the prayers of so many people.

In God's family, there are no outsiders, no enemies.

How could you have a soccer team if all were goalkeepers? How would it be an orchestra if all were French horns?

Niger is not an isolated island of desperation. It lies within a sea of problems across Africa - particularly the 'forgotten emergencies' in poor countries or regions with little strategic or material appeal.

God is patient with us to become the God's children he wants us to be but you really can see him weeping.

In the Bible, we first encounter God when he sides with a bunch of slaves against a powerful Pharaoh, an act of grace freely given.

Hate has no place in the house of God.

All the United States, it is a society that is split like to the bottom, that had very poor people in the country that is one of the wealthiest countries.

I don't think I've ever felt that same kind of peace, the kind of serenity that I felt after acknowledging that maybe I was going to die of this TB.

You stand out in the crowd only because you have these many, many carrying you on their shoulders.

I have been to the Occupied Palestinian Territory, and I have witnessed the racially segregated roads and housing that reminded me so much of the conditions we experienced in South Africa under the racist system of Apartheid.

In its history, Europe has committed so many massacres and horrors that it should bow its own head in shame.

Many people would be surprised that, in fact, I'm quite shy.

Europe became rich because it exploited Africa; and the Africans know that.

I mean in the South African case, many of those who were part of death squads would have been respectable members of their white community, people who went to church on Sunday, every Sunday.

I think that most of us would prefer to be popular than unpopular.

In many ways, when you're a Nobel peace laureate, you have an obligation to humankind, to society.