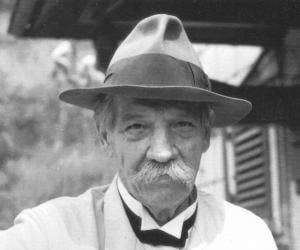 University of Strasbourg (1893 â€“ 1899)
Philosophers, Musicians, Physicians, Theologians, Intellectuals & Academics
Apart from being a renowned German theologian and physician, Albert Schweitzer was also an empathetic soul since his childhood days. While he was in school, Albert would dress in simple clothes which belied his affluent status, so that his lesser privileged classmates would not feel inferior. Throughout his life, he dressed modestly and radio talk show host Jack Paar once recalled that Schweitzer would always be seen in a white pith helmet, white shirt, pants and black tie. Paar also added that the priest owned the same tie for as long as twenty years. When someone remarked that many people own more than dozen of neckties, Albert said, "For one neck?" The eminent physician is also remembered by many as the founder of the "Albert Schweitzer Hospital" in Gabon, Africa. Some of the impoverished patients would apparently pick up chamber pots while leaving this health care hub and would use them as cooking utensils. Once during a train journey Albert's co-passenger inquired about his profession. To this Schweitzer, the humble and funny egalitarian replied, "I supply Gabon with chamber pots." It is also said that this personality resembled the renowned physicist Albert Einstein to a great extent and on more than one occasion, he was mistaken for the latter. During one such instance, two ladies approached him and enquired, "Have we the honor of speaking to Professor Einstein?" Schweitzer replied, "No unfortunately not, though I can quite understand your mistake, for he has the same kind of hair as I have." Pausing to rumple his hair this man continued, "But inside, my head is altogether different. However he is a very old friend of mine -- would you like me to give you his autograph?" Before the amused ladies could form a coherent reply, Albert took a paper slip from his pocket and signed, "Albert Einstein, by way of his friend, Albert Schweitzer."

In everyone's life, at some time, our inner fire goes out. It is then burst into flame by an encounter with another human being. We should all be thankful for those people who rekindle the inner spirit.

Man has lost the capacity to foresee and to forestall. He will end by destroying the earth.

Happiness is nothing more than good health and a bad memory.

Do something wonderful, people may imitate it.

Success is not the key to happiness. Happiness is the key to success. If you love what you are doing, you will be successful.

There are two means of refuge from the miseries of life: music and cats.

Life becomes harder for us when we live for others, but it also becomes richer and happier.

At times our own light goes out and is rekindled by a spark from another person. Each of us has cause to think with deep gratitude of those who have lighted the flame within us.

Example is not the main thing in influencing others. It is the only thing.

The purpose of human life is to serve, and to show compassion and the will to help others.

One who gains strength by overcoming obstacles possesses the only strength which can overcome adversity.

Think occasionally of the suffering of which you spare yourself the sight.

Sometimes our light goes out but is blown into flame by another human being. Each of us owes deepest thanks to those who have rekindled this light.

We are all so much together, but we are all dying of loneliness.

Constant kindness can accomplish much. As the sun makes ice melt, kindness causes misunderstanding, mistrust, and hostility to evaporate.

I don't know what your destiny will be, but one thing I know: the only ones among you who will be really happy are those who will have sought and found how to serve.

An optimist is a person who sees a green light everywhere, while a pessimist sees only the red stoplight... the truly wise person is colorblind.

The first step in the evolution of ethics is a sense of solidarity with other human beings.

Never say there is nothing beautiful in the world anymore. There is always something to make you wonder in the shape of a tree, the trembling of a leaf.

Ethics is nothing else than reverence for life.

Let me give you a definition of ethics: It is good to maintain and further life it is bad to damage and destroy life.

The only ones among you who will be really happy are those who will have sought and found how to serve.

Do not let Sunday be taken from you. If your soul has no Sunday, it becomes an orphan.

The willow which bends to the tempest, often escapes better than the oak which resists it; and so in great calamities, it sometimes happens that light and frivolous spirits recover their elasticity and presence of mind sooner than those of a loftier character.

One thing I know: the only ones among you who will be really happy are those who will have sought and found how to serve.

Man can hardly even recognize the devils of his own creation.

Ethics is the activity of man directed to secure the inner perfection of his own personality.

The tragedy of life is what dies inside a man while he lives.

Impart as much as you can of your spiritual being to those who are on the road with you, and accept as something precious what comes back to you from them.

A man is truly ethical only when he obeys the compulsion to help all life which he is able to assist, and shrinks from injuring anything that lives.

Compassion, in which all ethics must take root, can only attain its full breadth and depth if it embraces all living creatures and does not limit itself to mankind.

Until he extends his circle of compassion to include all living things, man will not himself find peace.

The true worth of a man is not to be found in man himself, but in the colours and textures that come alive in others.

Man must cease attributing his problems to his environment, and learn again to exercise his will - his personal responsibility in the realm of faith and morals.

A man is ethical only when life, as such, is sacred to him, that of plants and animals as that of his fellow men, and when he devotes himself helpfully to all life that is in need of help.

Wherever a man turns he can find someone who needs him.

A man can do only what he can do. But if he does that each day he can sleep at night and do it again the next day.

My life is my argument.

Just as the wave cannot exist for itself, but is ever a part of the heaving surface of the ocean, so must I never live my life for itself, but always in the experience which is going on around me.

A man does not have to be an angel in order to be saint.

As soon as man does not take his existence for granted, but beholds it as something unfathomably mysterious, thought begins.

Seek always to do some good, somewhere. Every man has to seek in his own way to realize his true worth. You must give some time to your fellow man. For remember, you don't live in a world all your own. Your brothers are here too.

Everything deep is also simple and can be reproduced simply as long as its reference to the whole truth is maintained. But what matters is not what is witty but what is true.

Truth has no special time of its own. Its hour is now - always.

Reverence for life affords me my fundamental principle of morality.

I wanted to be a doctor that I might be able to work without having to talk because for years I had been giving myself out in words.

Serious illness doesn't bother me for long because I am too inhospitable a host.

A great secret of success is to go through life as a man who never gets used up.

Humanitarianism consists in never sacrificing a human being to a purpose.

The highest proof of the spirit is love. Love the eternal thing which can already on earth possess as it really is.

Man is a clever animal who behaves like an imbecile.

Reverence for life is the highest court of appeal.

The African is my brother but he is my younger brother by several centuries.

Anyone who proposes to do good must not expect people to roll stones out of his way, but must accept his lot calmly, even if they roll a few stones upon it.

We cannot possibly let ourselves get frozen into regarding everyone we do not know as an absolute stranger.

Whoever is spared personal pain must feel himself called to help in diminishing the pain of others. We must all carry our share of the misery which lies upon the world.

I have always held firmly to the thought that each one of us can do a little to bring some portion of misery to an end.

Do something for somebody everyday for which you do not get paid.

By respect for life we become religious in a way that is elementary, profound and alive.

The great secret of success is to go through life as a man who never gets used up.