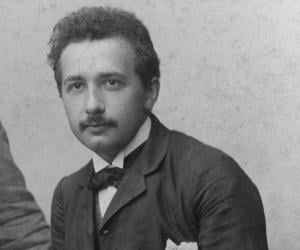 University of Zurich (1905), ETH Zurich (1901), Aargau Cantonal School (1895 â€“ 1896), Luitpold Gymnasium
Scientists, Physicists
There was a German man who often visited America, and at almost every instance, he would be stopped by a passerby with a request to elaborate on 'that theory'. For a man who had no desire to be in the limelight, this indeed got irksome, and so he decided on the course of action that would follow. The next time he was stopped by an inquisitive person on the road, he said, 'Pardon me, sorry! Always I am mistaken for Professor Einstein.' Need we formally introduce one of the most venerable physicists of the 20th century, Albert Einstein? Cutting to the chase, he was the astute mind behind the general theory of relativity; the one who altered the face of modern physics and quantum mechanics. This superlative genius is so distinguished that for several years now, scientists have tried to figure out if he had a unique brain structure that could account for his high IQ. The 'Nobel Prize' winner's life and works have inspired innumerable movies, plays as well as books. His absentmindedness, whacky hairdo and eloquent expressions are distinctive characteristics that have served as cues for actors playing a mad scientist or a forgetful professor. Perspicacious, epigrammatic and intriguing aren't words enough to describe the following quotes by Albert Einstein.

If you can't explain it simply, you don't understand it well enough.

Life is like riding a bicycle. To keep your balance, you must keep moving.

A person who never made a mistake never tried anything new.

We cannot solve our problems with the same thinking we used when we created them.

It's not that I'm so smart, it's just that I stay with problems longer.

Anyone who has never made a mistake has never tried anything new.

Look deep into nature, and then you will understand everything better.

Learn from yesterday, live for today, hope for tomorrow. The important thing is not to stop questioning.

Only two things are infinite, the universe and human stupidity, and I'm not sure about the former.

Strive not to be a success, but rather to be of value.

The true sign of intelligence is not knowledge but imagination.

Education is what remains after one has forgotten what one has learned in school.

We can't solve problems by using the same kind of thinking we used when we created them.

Only a life lived for others is a life worthwhile.

It is the supreme art of the teacher to awaken joy in creative expression and knowledge.

I have no special talent. I am only passionately curious.

The monotony and solitude of a quiet life stimulates the creative mind.

The most beautiful thing we can experience is the mysterious. It is the source of all true art and science.

The only source of knowledge is experience.

You can't blame gravity for falling in love.

If people are good only because they fear punishment, and hope for reward, then we are a sorry lot indeed.

When you are courting a nice girl an hour seems like a second. When you sit on a red-hot cinder a second seems like an hour. That's relativity.

The gift of fantasy has meant more to me than my talent for absorbing positive knowledge.

Whoever is careless with the truth in small matters cannot be trusted with important matters.

Peace cannot be kept by force; it can only be achieved by understanding.

If we knew what it was we were doing, it would not be called research, would it?

Technological progress is like an axe in the hands of a pathological criminal.

Imagination is everything. It is the preview of life's coming attractions.

The only thing that interferes with my learning is my education.

Once we accept our limits, we go beyond them.

Reality is merely an illusion, albeit a very persistent one.

No amount of experimentation can ever prove me right; a single experiment can prove me wrong.

Concern for man and his fate must always form the chief interest of all technical endeavors. Never forget this in the midst of your diagrams and equations.

The important thing is not to stop questioning. Curiosity has its own reason for existing.

Gravitation is not responsible for people falling in love.

The distinction between the past, present and future is only a stubbornly persistent illusion.

The only reason for time is so that everything doesn't happen at once.

Everything should be made as simple as possible, but not simpler.

Nationalism is an infantile disease. It is the measles of mankind.

Any man who can drive safely while kissing a pretty girl is simply not giving the kiss the attention it deserves.

Anger dwells only in the bosom of fools.

I live in that solitude which is painful in youth, but delicious in the years of maturity.

We shall require a substantially new manner of thinking if mankind is to survive.

When the solution is simple, God is answering.

A question that sometimes drives me hazy: am I or are the others crazy?

To raise new questions, new possibilities, to regard old problems from a new angle, requires creative imagination and marks real advance in science.

Common sense is the collection of prejudices acquired by age eighteen.

Joy in looking and comprehending is nature's most beautiful gift.

Do not worry about your difficulties in Mathematics. I can assure you mine are still greater.

Reading, after a certain age, diverts the mind too much from its creative pursuits. Any man who reads too much and uses his own brain too little falls into lazy habits of thinking.

In matters of truth and justice, there is no difference between large and small problems, for issues concerning the treatment of people are all the same.

The whole of science is nothing more than a refinement of everyday thinking.

The pursuit of truth and beauty is a sphere of activity in which we are permitted to remain children all our lives.

The hardest thing to understand in the world is the income tax.

Morality is of the highest importance - but for us, not for God.

Before God we are all equally wise - and equally foolish.

Intellectual growth should commence at birth and cease only at death.

Any man who reads too much and uses his own brain too little falls into lazy habits of thinking.

Most people say that it is the intellect which makes a great scientist. They are wrong: it is character.

A table, a chair, a bowl of fruit and a violin; what else does a man need to be happy?

The value of a man should be seen in what he gives and not in what he is able to receive.

He who can no longer pause to wonder and stand rapt in awe, is as good as dead; his eyes are closed.

The environment is everything that isn't me.

Imagination is more important than knowledge.

It is a miracle that curiosity survives formal education.

I believe that a simple and unassuming manner of life is best for everyone, best both for the body and the mind.

I never think of the future - it comes soon enough.

Pure mathematics is, in its way, the poetry of logical ideas.

Everyone should be respected as an individual, but no one idolized.

Only one who devotes himself to a cause with his whole strength and soul can be a true master. For this reason mastery demands all of a person.

I want to know all Gods thoughts; all the rest are just details.

That deep emotional conviction of the presence of a superior reasoning power, which is revealed in the incomprehensible universe, forms my idea of God.

We should take care not to make the intellect our god; it has, of course, powerful muscles, but no personality.

It is strange to be known so universally and yet to be so lonely.

The release of atomic energy has not created a new problem. It has merely made more urgent the necessity of solving an existing one.

Our task must be to free ourselves by widening our circle of compassion to embrace all living creatures and the whole of nature and its beauty.

The fear of death is the most unjustified of all fears, for there's no risk of accident for someone who's dead.

Whoever undertakes to set himself up as a judge of Truth and Knowledge is shipwrecked by the laughter of the gods.

An empty stomach is not a good political adviser.

I think and think for months and years. Ninety-nine times, the conclusion is false. The hundredth time I am right.

If you are out to describe the truth, leave elegance to the tailor.

Never do anything against conscience even if the state demands it.

Anyone who doesn't take truth seriously in small matters cannot be trusted in large ones either.

I do not believe in the God of theology who rewards good and punishes evil.

Science is a wonderful thing if one does not have to earn one's living at it.

It is only to the individual that a soul is given.