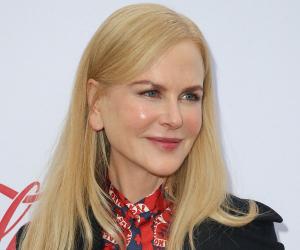 Did you know that popular Hollywood actress Nicole Kidman is a huge fan of Bollywood movies. Her first tryst with Indian cinema was during the time she was working on her Oscar winning project Moulin Rouge. She and director-producer Baz Luhrmann would spend hours screening Bollywood movies and apparently that is when the actress fell in love with them.

Here's the story of the time how chat show host Jimmy Fallon blew up his chance to date her. During her appearance on the Saturday Night show, Jimmy reminded the actress of their first encounter. To which Nicole replied 'Oh, I remember.' She then persuaded Jimmy to tell the audiences about that day.

Jimmy recalled how one of their mutual friends who was with Nicole in New York City that day called up and asked if he was free then he could bring her to his apartment. He agreed instantly and went to pick some cheese and crackers for Nicole. At this point Nicole interjected saying, 'I liked you.' Taken aback by what the Academy winning star just said, he said, 'What?' Nicole then went about explaining how their mutual friend had arranged for a date as she was single. A flummoxed Jimmy replied, 'Wait. What? What are you talking about?'

She then recounted how Jimmy was dressed in sweats and was wearing a baseball cap when he greeted her in. The encounter turned more awkward as Jimmy did not speak much and would only reply in monosyllables when needed. Finally he put up a video game and Nicole humorously adds, 'It was bad' and also revealed that she wondered if the humorist was gay.

After overcoming his embarrassment Jimmy later said, 'I can't believe I dated Nicole Kidman.' 'You didn't,' she replied.

I love acting, but it's much more fun taking the kids to the zoo.

I love working with people who are inspired and obsessive.

I love acting but I don't like all of the other stuff associated with it. The interest in celebrities, the press, the Internet, when your identity becomes mixed up in the way people are preceving you.

I refuse to let what happened to me make me bitter. I still completely believe in love and I'm open to anything that will happen to me.

I have a little bit of a belly, a tiny bit of pooch. It's the one thing I don't want to lose. I just like having some softness. If I lose that, then Tom might leave me.

I never knew I'd be in a musical, let alone win an award for one.

Having gone through all of this, I feel in some ways calmer now. It's strange, but sad. I think I'll always be sad.

Every day there is a compromise. Living with somebody requires a lot of understanding. But I love being married. I really love it.

Even from a very early age, I knew I didn't want to miss out on anything life had to offer just because it might be considered dangerous.

I believe that as much as you take, you have to give back. It's important not to focus on yourself too much.

Vengeance is a lazy form of grief.

I'm trying to find a man to share my life with, but it's not been easy. I'm a 35-year-old woman with two small children.

Salary stories are intrusive. Do you ask your neighbour what they earn for their job?

The thing you hate about yourself tends to be the thing that everyone likes about you.

I never read reviews at all. I'm proud of the work I did.

What's the point of doing something good if nobody's watching.

I think it's important that we don't all have to hold our heads high all the time saying everything's fine.