Poet, Polemicist, and Civil Servant for the Commonwealth of England. 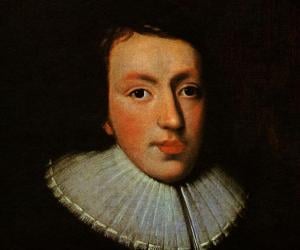 One day Milton was paid a visit by two very famous personalities in England. One was John Dryden, who had been made the Poet Laureate, and the other was Member of Parliament, Edmund Waller. Milton knew how much Dryden admired his work, ‘Paradise Lost’, and thus received his uninvited guests quite cordially. During the course of conversation, the three gentlemen began discussing poetic rhythm and other aspects of linguistics used in poetry.

As reported by John Dryden, during this visit, the blind poet had confessed that he had been greatly influenced by the works of Edmund Spenser, the writer of ‘The Faerie Queene’. That is when the Poet Laureate requested Milton to grant his permission for adapting the latter’s epic, ‘Paradise Lost’ into rhyme. Milton replied, “'Well, Mr. Dryden, it seems you have a mind to tag my points, and you have my leave to tag them. But some of them are so awkward and old-fashioned that I think you had as good leave them as you found them.”

Though it was an ironic criticism of the poetic practices of the Restoration period, Milton also gave his consent to Dryden. The King of Restoration, as John Dryden is referred to, set to work and within a month completed ‘The State of Innocence’. The adaptation, written in rhyming couplets and meant for the stage, fared better than ‘Paradise Lost’ until the end of that century.

For what can war, but endless war, still breed?

Who overcomes by force, hath overcome but half his foe.

They also serve who only stand and wait.

He that has light within his own clear breast May sit in the centre, and enjoy bright day: But he that hides a dark soul and foul thoughts Benighted walks under the mid-day sun; Himself his own dungeon.

True it is that covetousness is rich, modesty starves.

To be blind is not miserable; not to be able to bear blindness, that is miserable.

Death is the golden key that opens the palace of eternity.

He who reigns within himself and rules passions, desires, and fears is more than a king.

Gratitude bestows reverence, allowing us to encounter everyday epiphanies, those transcendent moments of awe that change forever how we experience life and the world.

A good book is the precious lifeblood of a master spirit.

When complaints are freely heard, deeply considered and speedily reformed, then is the utmost bound of civil liberty attained that wise men look for.

Beauty is nature's brag, and must be shown in courts, at feasts, and high solemnities, where most may wonder at the workmanship.

Nothing profits more than self-esteem, grounded on what is just and right.

The superior man acquaints himself with many sayings of antiquity and many deeds of the past, in order to strengthen his character thereby.

None can love freedom heartily, but good men; the rest love not freedom, but licence.

Who kills a man kills a reasonable creature, God's image, but thee who destroys a good book, kills reason its self.

He that studieth revenge keepeth his own wounds green, which otherwise would heal and do well.

Truth never comes into the world but like a bastard, to the ignominy of him that brought her birth.

The stars, that nature hung in heaven, and filled their lamps with everlasting oil, give due light to the misled and lonely traveller.

Let not England forget her precedence of teaching nations how to live.

No man who knows aught, can be so stupid to deny that all men naturally were born free.

Deep-versed in books and shallow in himself.

Virtue could see to do what Virtue would by her own radiant light, though sun and moon where in the flat sea sunk.

Though we take from a covetous man all his treasure, he has yet one jewel left; you cannot bereave him of his covetousness.