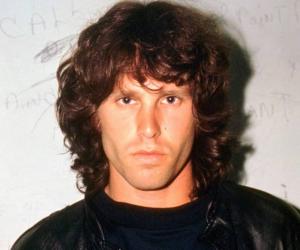 University of California, Los Angeles
Writers, Musicians, Singers, Lyricists & Songwriters, Rock Singers, Vocalists
It seems like the musical demigod Jim Morrison was quite famous for his prison escapades too. Within a span of six years, there were ten counts of punishable offences that the lead singer of the band 'The Doors' was arrested for. On the first instance, he was busted for creating a ruckus at a soccer game and humiliating the players, all under the influence of alcohol. As if that wasn't enough, he enjoyed stealing the possessions of police officers such as a helmet and an umbrella. Four years later, just before a public performance at "New Haven", a cop found the rock star getting cozy with a girl in a shower. When asked to "beat it", Morrison retorted by saying "Eat it", which resulted in him getting beaten by the police officer. The concert began late as a result of this and when the singer finally went on stage, he narrated the incident and hurled abuses at the "New Haven" police force. Morrison was immediately arrested for public obscenity and profanity. Another infamous incident surrounding the acclaimed singer was at a party held at the famous Las Vegas" hotspot named "Pussycat a" Go Go". Jim was reprimanded for allegedly smoking a cigarette that looked more like a Marijuana joint. What ensued was nothing short of a heated fracas, and the performer was booked for being drunk in public. The following year, Jim was once again arrested for misconduct on a "Continental Airlines" flight, when he was travelling to Phoenix to attend a "Rolling Stones" gig. No wonder, despite being an exceptional singer, Morrison was prohibited from performing in public in 1968.

There are things known and things unknown and in between are the doors.

A friend is someone who gives you total freedom to be yourself.

I see myself as an intelligent, sensitive human, with the soul of a clown which forces me to blow it at the most important moments.

Death makes angels of us all and gives us wings where we had shoulders smooth as ravens claws.

This is the strangest life I've ever known.

Expose yourself to your deepest fear; after that, fear has no power, and the fear of freedom shrinks and vanishes. You are free.

The most important kind of freedom is to be what you really are. You trade in your reality for a role. You give up your ability to feel, and in exchange, put on a mask.

Listen, real poetry doesn't say anything; it just ticks off the possibilities. Opens all doors. You can walk through any one that suits you.

Friends can help each other. A true friend is someone who lets you have total freedom to be yourself - and especially to feel. Or, not feel. Whatever you happen to be feeling at the moment is fine with them. That's what real love amounts to - letting a person be what he really is.

I believe in a long, prolonged, derangement of the senses in order to obtain the unknown.

I'm interested in anything about revolt, disorder, chaos, especially activity that appears to have no meaning. It seems to me to be the road toward freedom.

We fear violence less than our own feelings. Personal, private, solitary pain is more terrifying than what anyone else can inflict.

I think of myself as an intelligent, sensitive human being with the soul of a clown which always forces me to blow it at the most important moments.

People fear death even more than pain. It's strange that they fear death. Life hurts a lot more than death. At the point of death, the pain is over. Yeah, I guess it is a friend.

Where's your will to be weird?

When you make your peace with authority, you become authority.

Some of the worst mistakes of my life have been haircuts.

Sex is full of lies. The body tries to tell the truth. But, it's usually too battered with rules to be heard, and bound with pretenses so it can hardly move. We cripple ourselves with lies.

I think in art, but especially in films, people are trying to confirm their own existences.

It's like gambling somehow. You go out for a night of drinking and you don't know where your going to end up the next day. It could work out good or it could be disastrous. It's like the throw of the dice.

I like people who shake other people up and make them feel uncomfortable.

Each generation wants new symbols, new people, new names. They want to divorce themselves from their predecessors.

Actually I don't remember being born, it must have happened during one of my black outs.

If my poetry aims to achieve anything, it's to deliver people from the limited ways in which they see and feel.

Love cannot save you from your own fate.

The most loving parents and relatives commit murder with smiles on their faces. They force us to destroy the person we really are: a subtle kind of murder.

The appeal of cinema lies in the fear of death.

Hatred is a very underestimated emotion.

Drugs are a bet with your mind.

I am interested in anything about revolt, disorder, chaos-especially activity that seems to have no meaning. It seems to me to be the road toward freedom... Rather than starting inside, I start outside and reach the mental through the physical.