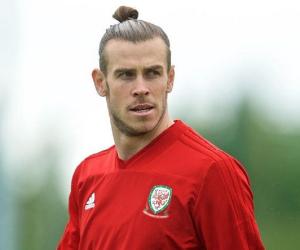 My dad's the one who's always been there; he's my hero, you could say. Even when he was working, he'd do anything for me. He's been the biggest influence in my life.

I think La Liga is the best league in the world.

I've certainly not got any famous people's numbers on my phone. It's just not my thing, really.

My friends and family keep me grounded.

I play computer games, watch TV and do what normal people do.

The most important thing is to not waste your money.

I was never too much into school. I liked lunchtimes and breaks, but nah, I hated sitting at a desk. I was always looking out of the window, looking at my watch, thinking about when I could play football.

I always believed in my ability, but I think in any sport you need that little bit of luck.

I was quite small; then I had a big growth spurt that led to a problem with my back, which stopped me playing for a while. My bones were growing too quick for my weight.

I don't go out, so I don't get attention from girls. They're not going to have posters of me on their walls. I just try to get on with my life.

As a kid, you obviously dream of being a professional footballer. I would watch players like Ronaldo of Brazil and pretend to be him in the playground. But I don't think about trying to become one of the best in the world or anything like that. I just play football.

I'd say that La Liga is slightly more technical than the Premier League.

There seems to be this thing in football where everything has to be... now!

Anything is possible in football.

I don't give much thought to individual awards.

When I was younger, I had some close friends who always loved European football, and Real Madrid at that time were the dominant force. I remember family holidays when we used to go to Spain, and we'd bring back replica shirts of Real Madrid and pretend to be the players when we played in the park.

Once you win something, yeah, you enjoy it. But then it's on to the next game.

I probably prefer Spanish football to the others. It's very technical, the way they play; they keep the ball well, and whenever Spurs have played against Spanish teams in the past, they've always made it difficult for us.

Everyone knows that I like to play centrally, where I can drift around. I like coming in off the right flank and having more freedom. I don't mind playing on the left, although I prefer playing centrally or on the right.

I'd say that Spanish football is probably the best I've seen.

Now that sports science is more advanced, we know that there are so many off-pitch factors that can affect how good you can become. If people are telling you to sleep a certain number of hours, eat specific foods, and drink a certain volume of fluids, then you have to be prepared to listen and learn.

Playing with and for the best can only help you to improve.

Between 12 and 14, I shot up a ridiculous amount. The muscles were struggling to stretch and grow at the rate my bones were growing. It gave me problems with my back and my hamstrings.

Whenever I get days off, I go home, or friends and family come up. I'm in contact with them every day, so it's like we live next door, but obviously we live in two different countries. Football is my job, and everyone around me has given me the opportunity to purely concentrate on football, and everyone else worries about everything else.

It's good to have a bad season because you learn a lot about yourself; you become stronger, and you see where you have to improve.

To represent your country is a massive honour.

The one player I have looked up to since I was a kid is Ryan Giggs.

As long as I'm playing week in week out, I'm going to become a better player.

I still mess around and joke with my family and friends like I did when I was nine or 10. For me, nothing's changed. Sure, I play football, but I try to keep my life off the pitch as simple as possible.

I don't think I've changed since I was a little kid.

When you're a sub, it's a game of more than 11 players starting the game.

When I go on a pitch, I just try to enjoy it as much as I can. The more you enjoy it, the better you play.

I love playing for Wales.

Whenever we're playing in front of a Welsh crowd, they really do give you that extra bit to get the win.

Every time I pull on a Madrid or Wales top, I run myself into the ground.

Every second I'm on the pitch for Wales is an honour, and I love playing.