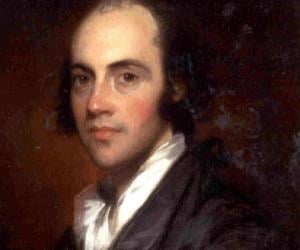 Columbia University
Political Leaders, Leaders
Alexander Hamilton, one of the founders of the United States of America was also the chief architect of the US constitution and the country's financial system. He was also the chief staff aide to the former American president George Washington. There are very few people of his repertoire seen in the pages of history, who have achieved so much during their lifetime. Hamilton held posts of prime importance and discharged duties that were vital for the country. He established the "Federalist Party", founded the "New York Post" and helped chart the constitution. The "US Coast Guard" and several governmental organizations were founded by Hamilton during his tenure as the secretary of Treasury. This eminent financial expert was born out of the wedlock to a Scottish immigrant father and British mother. Hamilton's father disassociated himself from the family when the political leader was still an infant. Alexander lost his mother during his teenage years and the tragedy deeply affected him. Struggling to make a living, he tried for an apprenticeship with a local businessman. It is said that this famous man lied about his age in order to grab this opportunity. Alexander used his dexterity to make an impression on his employers and in a few years time the import export firm decided to send Hamilton to the American colonies. The young lad who arrived on the American shores went on to become one of its most accomplished individual but his actual date of birth still remains an enigma.

Why has government been instituted at all? Because the passions of men will not conform to the dictates of reason and justice, without constraint.

A well adjusted person is one who makes the same mistake twice without getting nervous.

The sacred rights of mankind are not to be rummaged for among old parchments or musty records. They are written, as with a sunbeam, in the whole volume of human nature, by the hand of the divinity itself; and can never be erased or obscured by mortal power.

The nation which can prefer disgrace to danger is prepared for a master and deserves one.

I never expect to see a perfect work from an imperfect man.

A national debt, if it is not excessive, will be to us a national blessing.

When the sword is once drawn, the passions of men observe no bounds of moderation.

Men are rather reasoning than reasonable animals, for the most part governed by the impulse of passion.

I think the first duty of society is justice.

There is a certain enthusiasm in liberty, that makes human nature rise above itself, in acts of bravery and heroism.

You should not have taken advantage of my sensibility to steal into my affections without my consent.

There are seasons in every country when noise and impudence pass current for worth; and in popular commotions especially, the clamors of interested and factious men are often mistaken for patriotism.

Constitutions should consist only of general provisions; the reason is that they must necessarily be permanent, and that they cannot calculate for the possible change of things.

Even to observe neutrality you must have a strong government.

Why has government been instituted at all? Because the passions of man will not conform to the dictates of reason and justice without constraint.

In framing a government which is to be administered by men over men, the great difficulty lies in this: you must first enable the government to control the governed; and in the next place, oblige it to control itself.

Men often oppose a thing merely because they have had no agency in planning it, or because it may have been planned by those whom they dislike.

The voice of the people has been said to be the voice of God; and, however generally this maxim has been quoted and believed, it is not true to fact. The people are turbulent and changing, they seldom judge or determine right.

It's not tyranny we desire; it's a just, limited, federal government.

Real liberty is neither found in despotism or the extremes of democracy, but in moderate governments.

It is the advertiser who provides the paper for the subscriber. It is not to be disputed, that the publisher of a newspaper in this country, without a very exhaustive advertising support, would receive less reward for his labor than the humblest mechanic.

The inquiry constantly is what will please, not what will benefit the people. In such a government there can be nothing but temporary expedient, fickleness, and folly.

The honor of a nation is its life.

A promise must never be broken.

Let us recollect that peace or war will not always be left to our option; that however moderate or unambitious we may be, we cannot count upon the moderation, or hope to extinguish the ambition of others.

Safety from external danger is the most powerful director of national conduct. Even the ardent love of liberty will, after a time, give way to its dictates.

Unless your government is respectable, foreigners will invade your rights; and to maintain tranquillity, it must be respectable - even to observe neutrality, you must have a strong government.

Power over a man's subsistence is power over his will.

In the usual progress of things, the necessities of a nation in every stage of its existence will be found at least equal to its resources.

Nobody expects to trust his body overmuch after the age of fifty.

In politics, as in religion, it is equally absurd to aim at making proselytes by fire and sword. Heresies in either can rarely be cured by persecution.

The sacred rights of mankind are not to be rummaged for among old parchments or musty records. They are written, as with a sunbeam, in the whole volume of human nature, by the hand of the divinity itself; and can never be erased.

To all general purposes we have uniformly been one people, each individual citizen everywhere enjoying the same national rights, privileges, and protection.

Here, sir, the people govern; here they act by their immediate representatives.