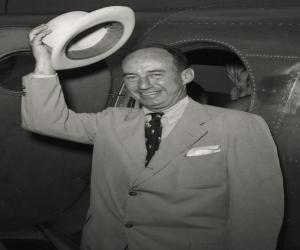 For those who are unaware, Adlai Ewing Stevenson competed in the US presidential elections on two occasions, and on both instances, this popular statesman was defeated by former head of state, Dwight D. Eisenhower. In 1952, when Stevenson was campaigning for the Democratic nomination, the politician was put up in the Lincoln Room at the White House. The entire night, this Abraham Lincoln admirer paced about in the room, not able to bring himself to lie on the same bed that his idol had once occupied. So, Stevenson resigned to spending the night on the sofa. It was only later that poor Stevenson found out that the bed was placed in the room much later, but the sofa had been there during Lincoln’s time.

A free society is a society where it is safe to be unpopular.

Your days are short here; this is the last of your springs. And now in the serenity and quiet of this lovely place, touch the depths of truth, feel the hem of Heaven. You will go away with old, good friends. And don't forget when you leave why you came.

A funny thing happened to me on the way to the White House.

Patriotism is not a short and frenzied outburst of emotion but the tranquil and steady dedication of a lifetime.

There is no evil in the atom; only in men's souls.

We cannot be any stronger in our foreign policy for all the bombs and guns we may heap up in our arsenals than we are in the spirit which rules inside the country. Foreign policy, like a river, cannot rise above its source.

The New Dealers have all left Washington to make way for the car dealers.

In America any boy may become President, and I suppose it's just one of the risks he takes.

With the supermarket as our temple and the singing commercial as our litany, are we likely to fire the world with an irresistible vision of America's exalted purpose and inspiring way of life?

Saskatchewan is much like Texas - except it's more friendly to the United States.

The Republicans have a me too candidate running on a yes but platform, advised by a has been staff.

We live in an era of revolution, the revolution of rising expectations.

To me, there is something superbly symbolic in the fact that an astronaut, sent up as assistant to a series of computers, found that he worked more accurately and more intelligently than they. Inside the capsule, man is still in charge.

Freedom is not an ideal, it is not even a protection, if it means nothing more than freedom to stagnate, to live without dreams, to have no greater aim than a second car and another television set.

Nixon is the kind of politician who would cut down a redwood tree, then mount the stump for a speech on conservation.