Co-founder of 'The Beatles' 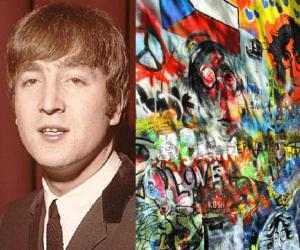 Dovedale Primary School, Quarry Bank High School, Liverpool College of Art
Musicians, Singers, Rock Musicians, Rock Singers
An acclaimed English singer and songwriter, Lennon is the co-founder of one of the most commercially successful bands ever- "The Beatles". He is also known for being a peace activist and belongs to the league of the finest songwriters in history. He was rated by the renowned "Rolling Stones" magazine as the "5th Greatest Singer Of All Time" and secured the number 8 spot on the list of "Britain's Most Influential Ever". Lennon went on to introduce a rebellious pop culture that shaped many generations that followed. One of Lennon's earliest musical collaborations was with his high-school band called the "Quarrymen", which eventually evolved into what would be called "The Beatles" later. Lennon's parents split when he was too young, leaving him scarred for a long time. He spent most of his childhood living with his aunt and uncle, Mimi and George Smith. Known to be a trouble maker as a child, Lennon was known for creating ruckus at every friend's home out of envy, because he never had a healthy living atmosphere like them ever. In fact, his bandmate Paul's dad would often tell him, "Keep away from him." From 1960 to 1970, "The Beatles" rose to become the most successful band ever. After 1970, Lennon broke away from the band and started his solo career that also proved illustrious with several chart toppers. On December 8th, 1980, Lennon was shot 5-times in the head by a deranged fan named Mark Chapman, an incident that sent the world in convulsions of shock and grief.

Love is the answer, and you know that for sure; Love is a flower, you've got to let it grow.

I believe time wounds all heels.

Life is what happens while you are busy making other plans.

We've got this gift of love, but love is like a precious plant. You can't just accept it and leave it in the cupboard or just think it's going to get on by itself. You've got to keep watering it. You've got to really look after it and nurture it.

Reality leaves a lot to the imagination.

Time you enjoy wasting, was not wasted.

Imagine all the people living life in peace. You may say I'm a dreamer, but I'm not the only one. I hope someday you'll join us, and the world will be as one.

Our society is run by insane people for insane objectives. I think we're being run by maniacs for maniacal ends and I think I'm liable to be put away as insane for expressing that. That's what's insane about it.

Love is the flower you've got to let grow.

As usual, there is a great woman behind every idiot.

If you tried to give rock and roll another name, you might call it 'Chuck Berry'.

Will the people in the cheaper seats clap your hands? And the rest of you, if you'll just rattle your jewelry.

Part of me suspects that I'm a loser, and the other part of me thinks I'm God Almighty.

If everyone demanded peace instead of another television set, then there'd be peace.

The more I see the less I know for sure.

Everything is clearer when you're in love.

When you're drowning, you don't say 'I would be incredibly pleased if someone would have the foresight to notice me drowning and come and help me,' you just scream.

I believe in everything until it's disproved. So I believe in fairies, the myths, dragons. It all exists, even if it's in your mind. Who's to say that dreams and nightmares aren't as real as the here and now?

Christianity will go. It will vanish and shrink. I needn't argue with that; I'm right and I will be proved right. We're more popular than Jesus now; I don't know which will go first - rock and roll or Christianity.

My role in society, or any artist's or poet's role, is to try and express what we all feel. Not to tell people how to feel. Not as a preacher, not as a leader, but as a reflection of us all.

Everybody loves you when you're six foot in the ground.

The postman wants an autograph. The cab driver wants a picture. The waitress wants a handshake. Everyone wants a piece of you.

If someone thinks that love and peace is a cliche that must have been left behind in the Sixties, that's his problem. Love and peace are eternal.

Yeah we all shine on, like the moon, and the stars, and the sun.

Music is everybody's possession. It's only publishers who think that people own it.

Surrealism had a great effect on me because then I realised that the imagery in my mind wasn't insanity. Surrealism to me is reality.

You're just left with yourself all the time, whatever you do anyway. You've got to get down to your own God in your own temple. It's all down to you, mate.

All we are saying is give peace a chance.

Lots of people who complained about us receiving the MBE received theirs for heroism in the war - for killing people. We received ours for entertaining other people. I'd say we deserve ours more.

The thing the sixties did was to show us the possibilities and the responsibility that we all had. It wasn't the answer. It just gave us a glimpse of the possibility.

I'm not going to change the way I look or the way I feel to conform to anything. I've always been a freak. So I've been a freak all my life and I have to live with that, you know. I'm one of those people.

It doesn't matter how long my hair is or what colour my skin is or whether I'm a woman or a man.

You either get tired fighting for peace, or you die.

There's nothing you can know that isn't known.

Jesus was all right, but his disciples were thick and ordinary. It's them twisting it that ruins it for me.

We were all on this ship in the sixties, our generation, a ship going to discover the New World. And the Beatles were in the crow's nest of that ship.

And God help Bruce Springsteen when they decide he's no longer God... They'll turn on him, and I hope he survives it.

I don't know which will go first - rock 'n' roll or Christianity.

Rituals are important. Nowadays it's hip not to be married. I'm not interested in being hip.

The basic thing nobody asks is why do people take drugs of any sort? Why do we have these accessories to normal living to live? I mean, is there something wrong with society that's making us so pressurized, that we cannot live without guarding ourselves against it?

It was like being in the eye of a hurricane. You'd wake up in a concert and think, Wow, how did I get here?

The cross of the Legion of Honor has been conferred on me. However, few escape that distinction.

Guilt for being rich, and guilt thinking that perhaps love and peace isn't enough and you have to go and get shot or something.

All you need is love.

God is a concept by which we measure our pain.

He didn't come out of my belly, but my God, I've made his bones, because I've attended to every meal, and how he sleeps, and the fact that he swims like a fish because I took him to the ocean. I'm so proud of all those things. But he is my biggest pride.

I don't believe in killing whatever the reason!

These critics with the illusions they've created about artists - it's like idol worship. They only like people when they're on their way up... I cannot be on the way up again.